Barring injury, Jeremy Hellickson had his final start of his 2010 major league season. Wade Davis and Jeff Niemann will be back in time for the next run through the rotation, moving Hellickson to either the bullpen or back to Triple-A. Either way we'll see him pitch again this season, helping out the Rays' bullpen down the stretch in September, but I'm not going to lie - I'm going to miss his starts. He's been great in all his starts (2.05 ERA, 2.54 FIP) and he's incredibly fun to watch. Mixing and matching, changing speeds, working hitters both inside and out - he makes a batter earn his hit.

Hellickson's final line last night doesn't look that sexy (6.1 IP, seven hits, three earned runs, one walk, seven strikeouts), but while watching the game, most of the hits were bloops or grounders that managed to find a hole. There were few hard-hit balls against Hellickson, although BJ Upton did make a nice diving catch on a deep flyball out in right-centerfield. Helly kept the ball low while pitching, throwing the vast majority of his pitches in the bottom half of the zone and allowing him to generate groundballs and whiffs. On the night, Hellickson had 13 whiffs (12.5% of his pitches throw), including eight with his change-up alone (out of 31; over 25% in total). He also got a couple whiffs with his fastball and curveball, although he did throw one bad pitch: 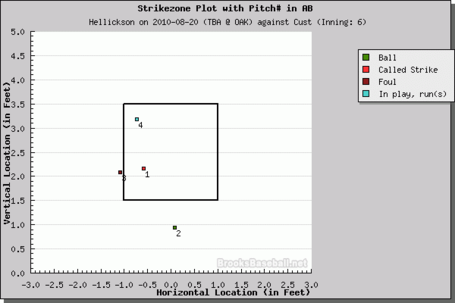 That's a curveball up over the outside part of the plate, thrown to none other than Mr. Three True Outcomes himself: Jack Cust. It was one of the few pitches Helly threw high in the zone all night and he paid for it dearly. That homerun tied the game up at three and although the Rays scored again on a Ben Zobrist solo homerun (!!!), the Athletics came back in the bottom of the eighth to take the lead.

In the end, though, pitching wasn't what lost the game for the Rays - it was their defense. First, in the seventh inning, Evan Longoria made a beautiful play on a bunt and had the runner thrown out, but Carlos Pena reached too far for the throw and it bounced off the heel of his glove for an error. No runs scored on this misplay, although the Athletics did threaten late. In the next inning, Ben Zobrist bobbled and ball that would have been the guaranteed final out of the inning, so instead the runner reaches and the eventual winning run scored from third. It was an uncharacteristic move from Zobrist and considering he hit a homerun earlier in the game, I'm willing to let him slide.

This was a game the Rays could've, should've won, but a few late big defensive lapses cost the Rays the win. Both Boston and New York lost as well yesterday, meaning we stayed even with them both; it was a perfect opportunity to gain another game on Boston and move back into a tie for first, though. C'est la vie. Let's get 'em today.