Share All sharing options for: Guessing the Rays' Postseason Bullpen: Hellickson vs. McGee

Late Friday night (or early Saturday morning, however you look at it), Jeremy Hellickson was demoted to the Class-A Stone Crabs to work out of the bullpen in preparation for a stint in the Rays' bullpen. This will allow the Rays to limit his workload while still letting him contribute to the major-league team, and it should help shore up the Rays' bullpen down the stretch. At the moment, their bullpen reminds me of something out of a horror film:

Those last three names on the list disappoint me. Mike Ekstrom and Dale Thayer have proven to be decent pitchers at the Triple-A level, but they're not pitchers I want to see in a close game down the stretch in September. The same goes for Lance Cormier; I know he was effective last season, but sadly his control has evaporated this season (4.94 walks per nine) and he can't strike anyone out (3.61 strikeouts per nine). He was never a pitcher to strike out a ton of batters, but this is bad even for him. He's shown improvements in his control recently (3.18 walks per nine in August), but he's still not someone that I like to see in a game.

*I understand that there's a chance the Rays won't make it to the postseason, but they have a very commanding lead on the Wild Card at the moment (5.5 games) so I'm willing to speculate. According to Cool Standings, the Rays have a 93.3% chance of making the playoffs right now. Life is good.

According to the rulebook, teams can only choose players for their playoff rosters that are on their active (25-man) roster or on the 15-day disabled list before September 1st, or are replacing an injured player on the 60-day DL. The Rays currently have an eight-man bullpen, but that's only because they're waiting to make a couple of roster moves, reinstating Wade Davis and Jeff Niemann from the disabled list for starts this upcoming week. Once Wade Davis and Jeff Niemann are reinstated, the Rays will need to demote two players to the minors. Dale Thayer and Mike Ekstrom are the obvious choices, with Andy Sonnanstine sliding back into the bullpen as the long-man.

As I see it, there are eight openings in the Rays' postseason bullpen - seven for relief pitchers and one for the Rays' fifth starter to slide out of the rotation and into the pen. Looking at the players they could potentially use, you get a situation that looks like this: 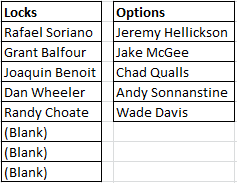 Grant Balfour is currently on the disabled list, so he'll be eligible for the postseason roster when he comes back (hopefully in mid-September). Rafael Soriano and Joaquin Benoit are obvious locks, while ROOGY Dan Wheeler and LOOGY Randy Choate are heavily used by Joe Maddon for match-ups. I believe Chad Qualls will make the final cut as the Rays' double-play-groundball expert; his command has been iffy with the Rays, but otherwise he's proven to be effective and has had more good outings than bad. That narrows it down to two competitions: Jeremy Hellickson vs. Jake McGee and Andy Sonnanstine vs. Wade Davis.

The Sonnanstine-Davis debate is a relatively low-impact decision. The long man in the bullpen typically doesn't pitch much in the postseason, as there are very few blowouts and a deep chain of talent lined up to enter a game before them. Sonnanstine has more experience pitching out of the bullpen now, but Wade Davis has better stuff and could be quite effective in short stints out of the pen. I give the edge to Davis.

As for the Hellickson-McGee debate, I think the final result is a foregone conclusion. McGee has been dominating out of the bullpen in Triple-A recently (12 strikeouts in 6.2 innings), but it seems like the Rays are committed to bringing Hellickson up to the Rays for the stretch this season. McGee has already thrown close to 100 innings this season in the minors (large increase from 30 innings last season) and since he's still working his way back from Tommy John surgery, the Rays will likely be careful with his arm. He may be called up to the major leagues when rosters expand in September, but his workload will be closely watched as he's being groomed for a role in the 2011 bullpen. Since the Rays still need to move J.P. Howell to the 60-day DL, Hellickson could spend most of September in the minors before arriving in the majors and still be added to the postseason roster.

When you put it all together, that's a bullpen I'm really excited to see in action. Sadly, it won't come together until late in September, as the Rays will likely lean heavily on September call-ups to help limit the workload of their better relievers. Rafael Soriano and Joaquin Benoit are two of the most heavily worked pitchers in the bullpen (both thrown more than 45 IP already), and the Rays will want to make sure they're in tip-top form come October.  So if we suffer through a few more Dale Thayer and Mike Ekstrom appearances before the season is over, remember that at the very least, we'll have a kick-butt bullpen when it matters most.