Share All sharing options for: Niemann, Rays Lose 12-3 to Angels

Today's game was one of those games it's just best not to think about.  Heck, after the third inning, it was best not to watch the thing - it was downright painful and disappointing. Jeff Niemann pitched the worst game of his major-league career (3.1 IP, 8 hits, 10 runs, 2 strikeouts, 3 walks, one homerun) and the Rays' offense was held at bay by Dan Haren and the Angels' pen, getting seven hits and three runs in total. John Jaso hit a lead-off homerun to begin the game, but after that, you might as well have turned off the game.

Because there wasn't much else of note to take from the game, let's take a look at what Niemann's issue was today. Watching the game, it seemed like he had horrible control, and the Pitch f/x charts show this very well: 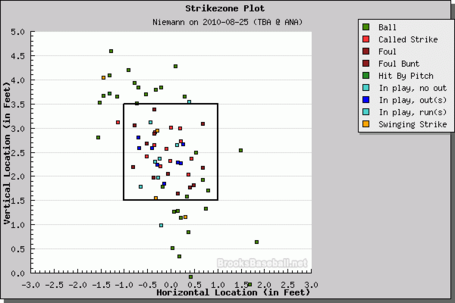 Ouch. So Niemann missed both high and low, and everything else ended up over the middle of the plate. It looks like he got squeezed on a couple pitches in the bottom right corner of the zone, but when your command is that far off, you're not going to get any extra help from the ump. Niemann threw around 58% strikes and he couldn't seem to get any of his pitches over the plate. Well, that's not entirely true: Niemann's slider was working well, going for a strike 11 our of 12 times and getting two swinging strikes. Outside of that, though, Niemann had nothing working for him. He had two swinging strikes on his fastballs, but that's out of 50+ pitches.

Thankfully, we shouldn't be too worries. Niemann is normally one of the Rays' most consistent starters and this is far and away his worst start of the season. Up until this game, Niemann's had never let up more than six earned runs to a team in a game, doing that twice last season and once in 2008, and he'd only thrown eight games where he allowed more than four earned runs. Every pitcher throws a stinker now and then, and it's more understandable when they haven't started a game in multiple weeks. I'll worry if the control issues continue to plague Niemann, but for now, it's just one game.

Since the Rays have played so well on this road trip, it's easy to brush this game off and move on. The Rays finished their West Coast trip with a 4-3 record despite facing quality pitchers like Dan Haren, Ervin Santana, Brett Anderson, Trevor Cahill, and Dallas Braden. The Rays still have a five game lead on Boston (and might be 5.5 games if the Sox keep losing tonight) and at worst, will only be down one game on the Yankees at the end of the night. Now we get to go home, sweep Boston, and cruise on into the playoffs. That's certainly how I'd like to spend my weekend...