Share All sharing options for: A Look Into Jeremy Hellickson's First Start

Jeremy Hellickson had an excellent first start to his very promising Major League career. You can read more about it here. I actually ended up attending the game so I didn't have the pleasure of watching him up close via television broadcast, but from my vantage point, it appeared Hellickson mixed his pitches well (especially with his change up) and inducing whiffs from all three of his pitches. Of course, it looked like he only had three pitches.

Steve had a good preview on Jelly Helly before the game and noted that he had five pitches: the four seam fastball, a two seam fastball, change up, curve, and a cutter that he has been working on this season. And when looking at the Pitch f/x data after the game, I noticed that he may have thrown all five. Here is a spin movement plot for Hellickson's start: 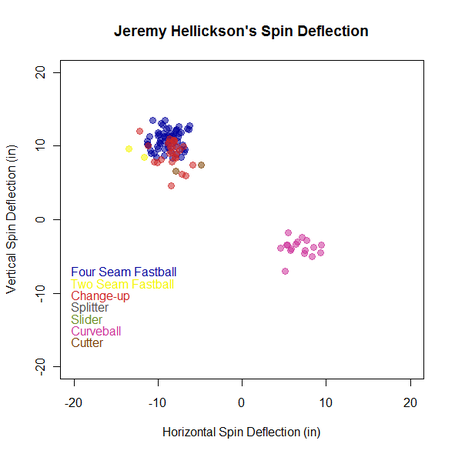 (Note: the Trop's Pitch f/x data in the past couple of months has been off from earlier in the season, namely the horizontal pitch movement. So I "corrected" it by subtracting five inches for this particular graph.)

Hellickson has a really, really tight cluster on all of his pitches. With the four outliers on his fastball, I labeled two as a two-seamer and two as a cutter, even though those cutters don't have the prototypical cutting movement in pitch f/x  as seen with other pitcher's cutters. Game recaps from the attending media can be very useful and this one convinced me to label those two pitches as cutters:

"We talked about it for a couple of days what we thought he was going to look like – that’s exactly what he looked like," manager Joe Maddon said. "Really calm demeanor.  Totally in control of his emotions. He pitches well, with really good stuff. A lot of 92 (mph fastballs) on both sides of the plate. You saw his change-up. You saw his breaking ball. A couple of cutters. But you see the make-up  -- it really stands out."

Now to his off speed pitches. I really like his change up. It is basically a straight change up as it spins like his four-seam fastball rather than a tailing sinker or screwball (think James Shields). A straight change up would be similar to what Jamie Moyer's change up looks like, relying on a large velocity separation for gravity sink and deception. As for his breaking pitch, it is a curve ball with not a lot of negative vertical spin deflection as with other pitcher's curves, but that doesn't mean it is flat. The break of the pitch is also important and Hellickson's averages around 13 inches, which is about average for a right-handed pitcher. Mike Fast wrote an article admitting he can't figure out what exactly Hellickson throws, so there still might be some tinkering going on.

Hellickson doesn't throw a slider, which I find similar to A.J. Burnett, who also has a similar arm angle and a low negative moving curve (for the record, Burnett used to throw a slider). Whether Hellickson develops one or not shouldn't be a problem in the short-term since all three of his primary pitches are plus-plus pitches.

I can't leave before I show a location chart of his pitches. To make it simple, I just plotted it by pitch type and batter handedness. 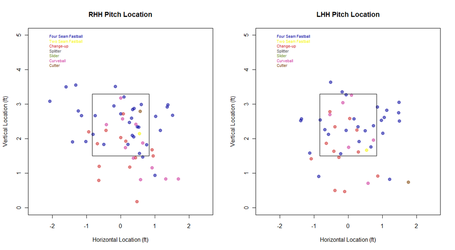 He is not afraid to use that change to right-handed hitters, but he did throw less curves to left-handers. That could  just be a one game occurrence. And avoiding middle-middle with the fastball is a plus, although it appear he was nibbling off the edges (this a "true" homeplate zone, if it is in inside the box it is over the plate).

This only a small sample and doesn't tell us everything about Jeremy Hellickson. But it is better than nothing and if all else, it shows us that Hellboy is a very promising pitcher.

Now to just find him some space.