James Shields and the Homerun: What Gives?

Share All sharing options for: James Shields and the Homerun: What Gives?

Here's a blatantly obvious statement: James Shields has a homerun problem this season. Right now, Shields is the major league leader in homeruns allowed with 28 (one less than he allowed all last season) and in homerun per flyball percentage with 16%. The league average HR/FB rate is typically around 10.6% and Shields's career average (including this season) is 11.9%. No matter how you look at it, Shields has let up an inordinate amount of flyballs turn into homeruns this season and his performance has suffered as a result. It's tough to keep runs from crossing the plate when you're averaging 1.20 homeruns allowed every start.

After Shields's latest homerun binge this past Saturday, I can't help but wonder: what gives? Is there something to his homerun problem that we should be concerned about? Last week, FreeZo tackled one possible variable, looking at Shields's quality of opponents and how that affected his homerun rate. In the process, he brought up a great point on the fickle nature of homeruns:

A key principal of sabermetrics is that pitchers have little control over the percentage of fly-balls that leave the yard, but do have some control over batted ball type. Fluctuations away from the mean for HR/FB are typically dismissed as luck, or as I prefer random variation, with little correlation year-over-year. Over the course of a season, one would think that the outliers made fewer or greater number of mistakes, but the greater influence is when those pitchers made the mistakes and if they were taken advantage of.

According to the most recent research, we shouldn't expect Shields's homerun problem to continue; going forward, we should still expect his homerun rate to look more like his career rate than his current rate. We've been saying that for a while, though, and it's easy to get frustrated and impatient. Remember, outlier seasons do happen - evaluating pitchers is a tough thing to do, and a pitcher's homerun rate doesn't stabilize over the course of a single season. It's small comfort to us now, watching Shields get blasted apart every five days, but long-term he's still a valuable pitcher.

I don't want to stop my analysis there, though. What if there is some underlying problem with Shields this season? Is there one pitch that is more homer happy? Is he having velocity issues? Control issues? His homerun rate may stabilize over time, but that doesn't mean that in a small time period, he could be having mechanical or control issues that need to be corrected. To try and answer some of these questions, let's dig into our best available tool: the Pitch f/x data.

If there's an underlying problem, it should show up in the data repeatedly. In other words, what do Shields's homeruns have in common? Is there anything that we can point to as a problem spot, or do the homeruns seem truly random?

So Shields has a problem with his fastballs, especially the four-seamer. Of course, he also throws his four-seam and two-seam fastballs more frequently than other pitches, but when you break them down by percentages, his fastballs are still the largest problem area. Surprisingly, despite all the flak that Shields's cutter has gotten this season, it's only been hit out of the park once.

Okay, so Shields tires as the game wears on. We already knew this, but it's good to see that reinforced. It's not because of velocity loss, however. Velocity is an easy variable to check and although radar guns vary from park to park, there doesn't seem to be a noticeable difference between Shields' best pitches and worst pitches. This season, his fastballs that generated swinging strikes averaged 91.2 MPH; his fastballs that were hit for homeruns averaged 91.6 MPH. This relationship holds true for all of Shields's other pitches, so cross velocity concerns off the list.

We now know that his fastball is the largest offender and Shields lets up more homeruns late in the game. Although Shields does lose speed as the game goes along, his fastball's velocity doesn't appear to be an issue with his homeruns allowed. What does that leave us with? Location. 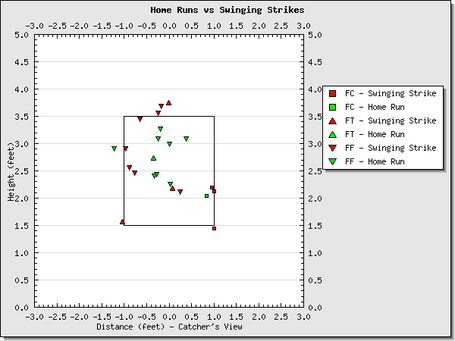 Shields has let up a disproportionate amount of first-pitch homeruns (10), and it's easy to see why. When spotted on the corners or slightly above the strike zone, Shields's fastball succeed; when he misses over the middle of the plate and high, though, it gets hit a long way.

Is this the problem? I'm torn. Shields does let up a large number of homeruns on fastballs over the middle of the plate. However, depending on the situation and the pitch sequencing, that same pitch can sometimes be effective for him. Consider: 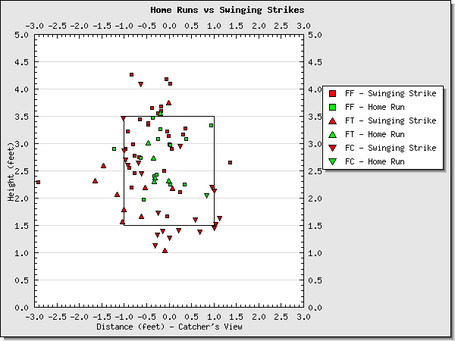 If Shields leaves his fastball over the middle of the plate, he will get swinging strikes occasionally, but he's still more likely to have it hit for a homerun. He seems to be very effective whenever he locates his fastball low or inside to right-handed batters (outside to lefties). If he wants to improve, he should work on the location of his fastball slightly more, trying to reduce the times he throws it high in the zone and over the plate. Maybe Shields loses a bit of his control as the game wears on, so he ends up grooving more pitches in an effort to keep throwing strikes. It's tough to say, but in the end, it doesn't matter who you throw a meatball to - major league hitters will hit a mistake a long way.