Bullpen Slump: Why The Rays Could Use Jake McGee

Share All sharing options for: Bullpen Slump: Why The Rays Could Use Jake McGee

For the record, no, this is not a reactionary post based off the conclusion of last night's game. I've been noticing this trend and then a comment in Jason Collette's post from yesterday cemented it in my mind: the Rays' bullpen has been slumping recently.

No matter what metric you look at, the Rays' bullpen has been one their strongest areas this season. According to FanGraphs, they have the eighth lowest ERA (3.62) and FIP (3.83) in the majors, out-pacing other top teams like the Yankees and Twins. While StatCorner shows the Rays' rotation as around average this season, it shows the bullpen as well above average. This is an area of strength for the Rays, allowing them to shut down teams in the late innings and let their offense slam the door closed for a win.

Over the last month, though, the bullpen has become more of a liability than an asset. During that time period, the Rays' bullpen ranks fourth from last in the majors in ERA (4.81) and FIP (4.43). One bad month out of an entire season isn't something to get worked up about, but it is a disturbing trend so close to the post-season.

What gives? Let's take a look at who's been the largest culprits. 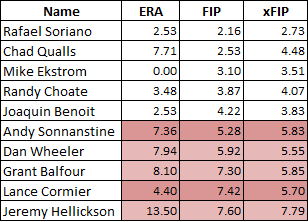 For the most part, the major players in the bullpen have performed well. Soriano and Benoit haven't been quite as dominant as their season numbers, but it's not like they're pitching poorly. Randy Choate has struck out a batter an inning while only allowing one homerun, so no problem there.

Chad Qualls, though, continues to be an enigma. Qualls is striking out batters at a high rate while limiting his walks, but his balls in play (BABIP) issues have followed him from the National League (.428 BABIP over last month). Going into depth with his issues is beyond the scope of this post, but as I see it, he's one of the Rays' biggest question marks for the post-season.

The worst performers in the bullpen are definitely Lance Cormier and Andy Sonnanstine. While neither of them sport the worst ERA/FIP/xFIP breakdown in the bullpen, they have been the most heavily used relievers over the last month - 14 IP for Cormier and 11 IP for Sonnastine, the top one and two totals in the pen. Before you get too worked up, remember that they've seen so much action because the Rays have had poor starting pitching performances. Both of them are seeing action only in extreme low-leverage situations and neither will likely be on the Rays' post-season roster. They're nothing to be worried about going forward.

The other three underperformfers - Dan Wheeler, Grant Balfour, and Jeremy Hellickson - have all pitched less than six innings in the last month. While their numbers might be poor over that time frame, six innings to too small a sample to draw conclusions from. In particular, I'm not worried about Balfour: he's returning from an injury issue and striking out batters at a high rate (10.9 K/9). His control has yet to return (8 BB/9), but control is normally one of the last things to return to a pitcher, so I'm willing to give him time.

Hellickson has transitioned poorly to the bullpen thus far, leaving the door open for an entrance by Jake McGee. As Collette has pointed out, Andy Sobsey speculated that the Rays may call up McGee now that Durham is moving to the Triple-A finals, providing them with another left-handed reliever out of the pen. McGee has been dominant in the minors this season, striking out 23 batters and walking one in 15 innings. He's induced groundballs at an above-average rate (~45%) and dominated left-handed batters. He'd be a great addition to the Rays' slumping pen.

More likely than not, the Rays' bullpen will perform better going forward without any changes: we have a strong bullpen despite what we've seen this past month. However, could we please call McGee up? Pretty please?