Share All sharing options for: Joe Maddon Blinded Me With Science (Shortstop Usage)

Last week I hypothesized that Joe Maddon may be splitting up the shortstop duties against right-handed pitching between Jason Bartlett and Reid Brignac for reasons other than concerns over Bartlett's trade value or out of puppy dog loyalty. When looking at the power/finesse and groundball/flyball splits of opposing pitchers, Brignac had a clear advantage against finesse and ground ball pitchers, while struggling mightily in a very small sample against power and fly ball pitchers. In the comment section of the post a quick look at slit usage numbers gave the appearance that swing plane was not a major concern.Unsatisfied, I decided to dig a little deeper.

It's been a strange year for both Brignac and Bartlett. Brignac began the year as part of a 2nd base platoon against right-handed pitching. With Matt Joyce rehabbing in the minors, there was a clear opening for Ben Zobrist in right field. Jason Bartlett went on the disabled list in early June with a hamstring that forced Reid into full time shortstop duty for a few weeks. Bartlett returned in mid-June with the Rays playing it cautious. On June 22nd Bartlett made the front end of his first consecutive starts since coming off the disabled list. This limited Brignac to what appeared to be Bartlett's days off and occasional starts at 2B with Zobrist in right and Matt Joyce DHing. August arrived and so did Dan Johnson which essentially marked the end of Brignac's playing time at second base (Zobrist 2B, Joyce RF, Johnson DH). Reid seemingly fell off the the face of the earth, getting only the very occasional start against a right-handed pitcher at shortstop.

Let's go back to June 22nd, the date of Bartlett's full time return. According to statcorner.com,. the league average ground ball rate is 4.23%. If we plot the opposing right-handed starting pitcher's career ground ball percentage and identify whether Brignac, Bartlett or both played on that day we get the following illustration: 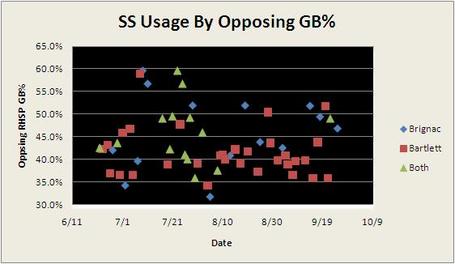 Since Dan Johnson's callup, Joe Maddon has never used Reid Brignac against a flyball pitcher (below-average groundball rate). However, Brignac has received a majority of starts against right-handers with above-average ground ball rates. Whether or not you agree with Maddon is up for debate, but the Rays are attempting to play Brignac exclusively against RHSP with above average ground ball rates. Four of the last five right-handers with groundball rates north of 45% have faced Brignac.

One last note, we looked at Briggy's BA/OBP/SLG splits in the last post. Here are both shortstops K rates against each type:

While the magnitude of the split may be off due to the sample of 117 PA vs flyball pitchers, its clear Brignac's swing is best suited for ground ball pitchers. The Book suggest managers do not utilize this platoon split enough; lucky for us Joe Maddon is not your average manager.