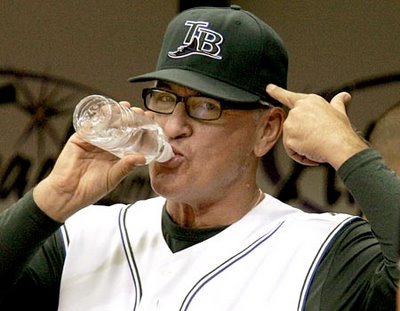 On April 16, 2006, Ty Wigginton, Jonny Gomes, and Damon Hollins each hit home runs, powering the Tampa Bay Devil Rays to 9-5 win and a sweep over the Kansas City Royals. The Devil Rays then possessed a 7-6 record and were in 2nd place -- only 1 1/2 games out of first.

This would be the last day that Joe Maddon was ever a winning manager in Tampa Bay.

Yes, only 13 games into his tenure here in Tampa, Maddon began watching loss after loss until the Devil Rays finally ended that season at 36 games behind the Yankees, and he began his great trek into pitifulness that was 2007.

However, just the other day, Maddon finally hit .500. I think that now -- more than ever because of the playoff push -- it would be a great time for Maddon to hit the winning side of .500. After the recent losses to the Orioles and Red Sox, it seems fate would want to keep him away from this mini-milestone. So let's counter fate with some voodoo.

As with most of our Photoshop contests, we will rec the best item until we can declare a winner. I propose that the winning picture of the current contest be posted at the beginning of each GDT until Maddon is a winning manager.

Here are some suggestions and guidelines: