A Look at Kyle Farnsworth

Share All sharing options for: A Look at Kyle Farnsworth

When first encountered with the news we had signed Kyle Farnsworth my initial reaction was "Ugh." Then I started to warm up as I looked closer in to his numbers, read what some bright folks around the intertubes, and found out the contract details. All in all, I'd say I'm pretty pleased with what's transpired. First off, Farnsworth's deal is pretty ideal for a seemingly high-risk or high-reward relief arm; limiting the years and providing  a team option protects the club from an albatross in the bullpen while allowing the team potential control for another year. Furthermore, as many have pointed out it seems as though Farnsworth has made strides the past two years from just being a fire-balling hot-head with a straight fastball and no command to a pretty serviceable reliever.

So what happened exactly? Well there's been a bunch of chatter that I'm sure most of you saw. Mike Fast and a few others supposed it was his introduction of a cutter in 2009 that may have helped. Fast also posted a great graph showing that Farnsworth has seemingly improved his ability to repeat his mechanics producing a more consistent release point (see below): 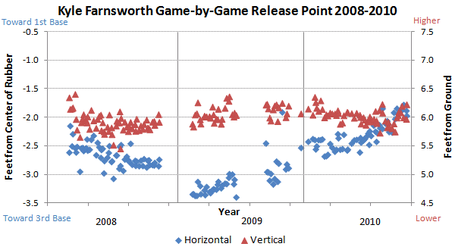 This is the beginning of a pretty good explanation, but I wanted to delve in to the Pitch FX data and see what I could find to corroborate these suppositions on his improved performance.

We'll start with what Pitch FX says he's thrown over the last 3 years to both lefties and righties:

As you can see, Fansworth was primarily a two-pitch pitcher in 2008. He threw a change every now and then (or had a pitch classified incorrectly which we'll look at in a bit), but he primarily worked FB/SL. Like Fast pointed out, he added the cutter in 2009. The interesting thing (to me at least) is that he seemingly immediately started pounding the cutter to righties. In my mind, I've always thought of the cutter as a great pitch to use on opposite handed players to saw them off (why Mo has so much success against LHBs). To work the cutter effectively to RHBs Farnsworth would have to be pretty good at keeping it inside and off th  barrel of the bat, and he was seemingly effective considering the pitch has had a positive value both years he's used it. In addition, he didn't even have any trouble hitting batters in 2009 when he first added it (only hitting one batter on a fastball that year). So he was either able to work out over the plte effectively against righties or his command allowed him to come inside with out hitting anyone. Either way, both of those aspects seem to be good endorsements of the pitch.

Apart from the cutter, it seems that Farnsworth seemingly scrapped the change in 2009 but added it back in 2010. According to the Joe Lefkewitz's great pitch FX tool he only threw 2 in 2009, but Fangraphs had him at a handful more in 2009 and less in 2008 and 2010. To me, this seems like it's just a mistake pitch that's hard to classify. Looking at some of the pitch FX numbers that becomes more clear:

The change is similar in break to the fastball with more vertical drop and less horizontal break, but it clocks in about 5-7 MPH slower. The change doesn't seem to share enough with any other pitch, in my opinion, to classify it as a misclassification or "missing" on another pitch (though I'm nowhere near a Pitch FX guru). The thing that jumps out to me here is just how hard Farnsworth throws, and just how much the cutter adds to his arsenal. While pretty much everything he works is hard, he has three different speeds with 3 pretty different breaks (though they all break about the same way). This is why he's been able to increase his GB% by about 5% from his pre-2009 numbers (38% to 43%). While his swinging strike percent has remained about the same, and his ball percent for that matter, he's been better because more of the contact he allows goes for groundballs. This "weaker contact" could also be part of the reason he's seen such a drop in his homerun rate.

Finally, I'll leave you with a look at how Farnsworth has gotten his swings and misses as well as thrown balls in the last three years for each of his pitches:

As you can see, the cutter has been his best pitch at inducing these swings and misses followed by his slider. Hopefully, his recently revamped arsenal will help him mow-down plenty of opposing batters this summer.