Extracting the Juice Out of Desmond Jennings

Share All sharing options for: Extracting the Juice Out of Desmond Jennings

A lot of post-Manny/Damon signing analysis has declared Desmond Jennings the biggest loser of the day as it appears he is destined to start the season in AAA Durham. To be honest, this was a likely scenario before the signings, but the presence o Johnny Damon no longer makes it a short-term sacrifice for the benefit long-term game. Desmond Jennings has been our top positional prospect for a few seasons and has an incredibly bright future, but there are several good reasons from the team's perspective to have him in Durham for the near-term. Let's take a look at some of the common arguments for putting Jennings on the 25-man and then I will attempt to validate the reasons why it is preferable to have him in Durham.

1. Desmond Jennings has already played a full season in AAA and is one of the top outfield prospects in baseball. Leaving him in AAA any further can be discouraging and stunt his development.

Desmond Jennings would probably be the first to tell you he had a disappointing 2010 campaign. Deezy entered the season ranked as the sixth best overall prospect in baseball by both Keith Law and Baseball America. Jennings sprained his wrist in the Spring, and failed to build on 2009's momentum finishing with a AAA slash line of .278/.362/.393. Jennings has displayed a great glove, plate discipline and speed, but the power element has yet to blossom. Hopefully Jennings can build on these numbers in 2011 and earn a promotion to the big leagues, but there is plenty of room for development in AAA in the mean time. Injuries have been a concern about Deezy for years, and last season  did nothing to quell those worries.

We have heard similar concerns regarding stalling the development  of John Jaso (26/27), Matt Joyce (25/26), and Reid Brignac (24/25), yet when they finally got their chance they proved able to deliver with minimal growing pains and will now be around the organization for their peak years which leads us to...

2. Desmond Jennings turned 24 in October. Top prospects are usually in the big leagues right around now.

The Rays are a a very patient organization and with good reason. The Rays will have very few players stick around beyond their cost-controlled years; it's the nature of small-market baseball. Player salaries are under team control for the first three seasons (excluding Super 2s), after which the player becomes eligible for three years of arbitration which uses a guideline of 40-60-80% of the player's market value. Knowing that there is typically a six-year cap for individual players on the major league team, the Rays need to maximize each players time on the 25-man roster.

The great Mitchel Lichtman, co-author of The Book has done a lot of research into peak ages of baseball players finding that players peak at 27/28 years old. The question for optimal utilization can be answered by looking at the changes from each year before and after the peak. 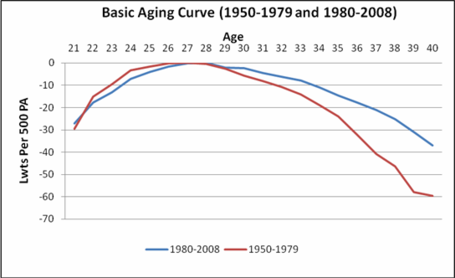 If the aim is to try to time expected peak age optimization within the constraints of team-controlled years, then the first year of service time should be the 24/25 year old season (2011) or the 25/26 year-old season (2012). Jennings would be 30 or 31 heading into his ARB 3 year coming off his peak stretch, hopefully scoring the team a massive loot in exchange for a train that will likely be heading downhill. By waiting 30 days into the season the Rays will, they will save a year of team-control. If they wait 80 days or until the end of June,the Rays can avoid Super 2 status (adds a fourth year of arbitration eligibility),  yet still have his 2nd half contributions.

Contrast that to ghost of Rays past Delmon Young now age 25, who finished the season at 2.1 WAR, his first season worth a full win above replacement. At 25 years old there should be no shame in that, but he is already north of three years of service time and into his arbitration years. He will be a free agent for his 28/29 season. That's poor resource optimization. Nobody likes to have their prospects out of sight in the minors; shiny new toys are very exciting. Yet people will be outraged when BJ Upton is likely traded heading into his ARB 3 season next year which leads us to......

Yes and no. In terms of exceptional glove work, yes. But Carl Crawford is a center-fielder playing in left. The Rays have been  blessed with having Upton and Crawford in the outfield at the same time. Crawford's bat allowed the Rays to play two center-fielders for years. However, shortstops, catchers, and center fielders are generally the toughest position players to replace. The Rays can find bats with slightly less glove to replace Crawford minimizing the damage because he played in a corner outfield spot. These guys typically mash. Finding an affordable replacement in center is a much more daunting task.

BJ Upton is the second-most expensive Ray to Johnny Damon and there is a very good chance neither one will be back next year. Enter Desmond Jennings, now a tailor-made replacement at a much tougher position to replace. Playing in center-field should also take a lot of the pressure of his bat as the expectations are greater in the corner, particularly if you are facing the task of replacing team legend Carl Crawford. Saving that year of service time hopefully assures the Rays of six more years of a premium position locked down under team control with a well-above average player.There might be some groans about trading Upton but the current front office can't be held accountable for the sins of the past regime. To the team's credit they have been masterful in having exciting replacements ready to ease the pain of losing fan favorites as they become more expensive. The Matt Garza trade is a perfect example. Jeremy Hellickson is able to step right in now as a top pitching prospect in baseball and the farm receives a sweet overhaul of exciting prospects while not surrendering competitive years.

Between Ben Zobrist, Matt Joyce, and Johnny Damon, the Rays should have their 2011 corner spots in pretty good hands. Those concerned about Damon's weak arm in left should feel better with potential defensive specialist Sam Fuld available off the bench late in games with the lead. Fuld is 29 and out of options, therefore there is no reason to be concerned about his service clock being wasted on the bench.  If Fuld isn't your cup of tea, there are a multitude of other possibilities afforded as a result of the Rays positional flexibility. The Rays can clearly communicate their plan to Jennings, show examples of prior successful debuts, and give him areas of his game to work on as they did with Jaso, Brignac, and Joyce. Hopefully knowing where he stands in the Rays plans can eliminate the guessing games and allow Jennings  to further blossom his game. Six years out the team will be much better off for it.