Why the Rays Have a Shot in 2011: Dissecting the Projections

Share All sharing options for: Why the Rays Have a Shot in 2011: Dissecting the Projections

Last week I took a look at historical reasons why the Rays still have a chance to compete for the playoffs in 2011. This week, I focus more closely on the statistics.

I don't think it's a stretch to say that all baseball fans - whether you're an identified stathead or ardent traditionalist - love preseason projections. Since teams change so much over the winter and Spring Training can drag on for ages, we all want to know how good our team is going to be this season. Optimism runs abound, as fans of losing franchises can convince themselves that things are going to change, and everyone debates about which players are going to break out or bust in the coming year. There's so much uncertainty, and everyone wants to get their opinions heard.

While rosters still aren't set for 2011 - I'm still keeping my fingers crossed for one more trade - the projections and speculation have already begun. Jason Hanselman created a fantastic projection calculator that anyone can use, and he pegs the Rays at around a 92-win team. The CAIRO projections pegged the Rays as an 87-win team before the Farnsworth, Ramirez, and Damon deals, while the ZiPS projections put the Rays at a similar talent-level all the way back in November. Our own PGP also did some recent WAR projections, and had the Rays at around a 94-win talent level.

These number may vary slightly, but when you adjust the old projections for the recent additions made by the Rays, all the projection systems come near to an agreement: as constructed currently, the Rays are around a 90-92 win team. This total puts the Rays a few games behind the Yankees and Red Sox, as both their rosters project about 3-5 wins better.

Fear not, though! These projections are great news for Rays' fans, and give us a great reason to be excited about this upcoming season. Despite whatever the media may say, the Rays are in the playoff hunt and have a darn good chance of making it too. My reasoning? Variability.

Projections are treated by most people as hard fact, when in fact there is a high degree of variability built into them. Projections are best viewed as estimates of a player or team's "true talent level" - in short, how good we think they are based on all the information we have on them. But as we all know from our day-to-day lives, having a "true talent" at a particular level does not necessarily mean you'll perform at that level going forward.

Let's considering two examples. The first one is simple: flipping a coin. We'd expect that a normal coin would have a "true talent level" of landing heads 50% of the time, right? If you flipped that coin 100 times, though, it may be that you'd end up with 53 heads and 47 tails....or with 45 heads and 55 tails. You'd be most likely to end up with a result close to 50/50, but it's no guarantee that things would end up precisely at the coin's true talent level every single time.

If that's not convincing enough (after all, there's no "talent" involved in whether a coin comes up heads or not), consider basketball. Each of us has a specific true talent level for hitting free throws, some better than others. I'm horrible at basketball, so I'd place myself around a 30% talent level, meaning I'm likely to make around three baskets out of every ten. If I went out and shot five different sets of 10 free throws, though, I wouldn't necessarily make three every single time; my scores may look something like 2, 4, 5, 3, 1. This variability doesn't mean my true-talent level is wrong: it just means that there's no guarantee we'll perform exactly at our true talent level every time we perform. Sometimes we may over-perform, while others we may under-perform. 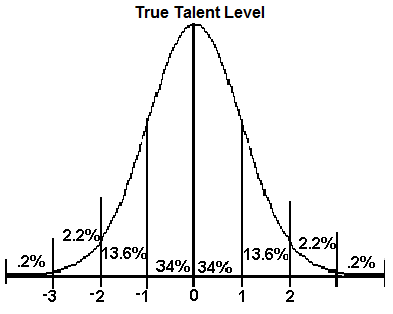 In other words, if the Rays are a true talent 92-win team, there's a 68% chance they win between 86 and 98 games next season. Similarly, if the Yankees are a 95-win team, their likely range is anywhere from 89 to 101 wins. Injuries could happen, players could over- or under-perform, or one team could simply get a few more clutch hits than the other. Anything can happen over the course of 162 games.

The top three teams in the AL East - the Red Sox, Yankees, and Rays - are all close enough in talent level that anything could happen this season. While it's most likely that the Red Sox will finish in first and the Rays in third, it's far from being a guarantee - teams vary around their projected talent level more than most of us realize. For example, the Rays have been projected to win around 88-93 games over each of the past three season, yet they've finished each season with widely different win totals: 96, 84, and 97.

The Rays have put themselves in a position to be competitive in the AL East this season. Whether they end up finishing above or below their 50th percentile projection is up in the air, but they're close enough to make this race interesting. This is a team full of young players with high upside: if a couple things break the right way, the Rays could be sitting in the playoffs yet again.

For another take on this concept, check out "The Rays and the Win Curve" over at The Process Report.