Note: THIS ARTICLE IS A JOKE that--if it's lucky--might occasionally rise to the level of satire. It is not intended to be taken seriously. Since we don't often post articles of this nature, I thought I'd get this out of the way now so no one is confused.

ST. PETERSBURG, FL: The Tampa Bay Rays thought they got a deal when they signed aging slugger Manny Ramirez to a one-year/two-million dollar contract last Friday, but were shocked when infielder Ronnie Belliard showed up to Rays HQ this morning ready to play. Some executives didn't notice for a few hours as Belliard tried pretending he was Ramirez, but Rays Executive Vice President of Baseball Operations Andrew Friedman eventually saw through the ruse during a lackluster round of batting practice. The deception worked long enough, however, as Belliard had already signed a contract to play for the Rays in 2011.

"That's just part of the game. It's a coin-flip, really," Friedman said, "It's like that famous saying: sometimes you win, sometimes you lose, and sometimes you sign Manny Ramirez for two-million dollars only to to find out you've been bait-and-switched for Ronnie Belliard."

Research has uncovered that this isn't the first time Belliard has impersonated Ramirez. In 2004, the Cleveland Indians signed Belliard, but claimed they had brought back Manny in an attempt to fool fans into the stands. Fans were skeptical that Ramirez would play second base, but no one could be sure that he was not just wildly out of position in left field.

After trading for Ramirez in 2008, the Dodgers signed both Ramirez and Belliard in 2009 just to make sure they didn't get fooled. Just ten days after Ramirez was traded to the White Sox on August 31st, 2010, Belliard was given his outright release from the Dodgers.

And this phenomenon is not just related to Ramirez and Belliard... after the jump...

The follow-up to the 2005 blockbuster Doom, Doom 2: Return 2 Castle Wolfenstein was relegated to a Direct-to-DVD release after producers mistakenly paid $10M for Dwayne 'The Rock' Johnson and pitcher Freddy Garcia showed up instead. Critics complained that with his backgrounds in pitching and Shakespearean acting, Garcia was too talented of an actor for the role. 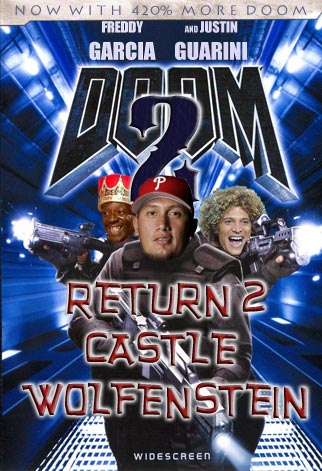 In 2010, Japanese baseball fans were disappointed when, instead of their favorite Looney Tunes character Gossamer, Matt Murton was signed to play for the Hanshin Tigers. Despite putting up a career season in which he broke Ichiro Suzuki's single-season hit record, Japanese fans never forgave Murton for his perceived betrayal. Tigers coach Akinobu Mayumi even forced Murton to tattoo anime-style eyes over his own in order to appear more cartoon-like. Murton did not look like he was upset about this...

When the Rays signed Ramirez and Johnny Damon it was believed that outfielder-in-waiting Desmond Jennings stood to lose the most by being forced to remain in AAA, but, with the acquisition of Belliard, it now seems that infield utility-man Elliot Johnson is the biggest loser.

"I'm disappointed, but this is also a learning experience," said Johnson after he heard the news. When asked if he had anything left to prove in Durham, he replied, "Obviously. This season, I'll have to put in more work trying to look like Evan Longoria rather than trying to hit like him. Though it's going to be tough to afford all that hair gel on a minor leaguer's salary."

UPDATE: Further investigation reveals that Ramirez has not been seen since the Dodgers traded him to Chicago last September. Apparently, the White Sox were also bait-and-switched for Ramirez, but didn't know it because Belliard had considerably improved his disguise.

"We knew there was something wrong when he wasn't hitting, but he looked like Manny, down to the dread[lock]s and everything," said White Sox GM Kenny Williams. When asked why he didn't come forward sooner, Williams replied that he was "embarrassed, mostly" and "still a little confused about the whole situation."

Using DNA analysis, scientists at the Belliard/Ramirez Research Institute in Reykjavik, Iceland, confirmed that the dreadlocks were in fact Ramirez's. How they got on Belliard's head, though, was a subject of much controversy. 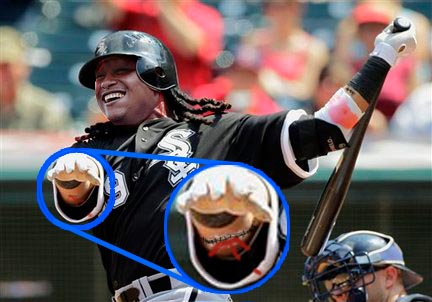 Svein Flosadottir, a third-year analyst, thinks this switch is merely a con game being played by Ramirez and Belliard. "Mr. Ramirez is the one pulling the strings here. He's most likely split the money with Mr. Belliard and can finally relax and let someone else do the work for a change."

However, project leader JonGunnar Sigurbjornsson, believes there is something more nefarious at play.

"There is sufficient evidence to suggest that Mr. Belliard is, in fact, wearing Mr. Ramirez's skin and hair as a suit. Notice how, with the White Sox [pictured above], it appeared that Ramirez was bleeding from his hair line and other places on his skin. At the time, many thought this was just another example of "Manny Being Manny", but we now suspect that this was actually Belliard bleeding from points where he'd stitched Mr. Ramirez's skin to his own." [emphasis added]

The "Ronnie Belliard Is Wearing Manny Ramirez as a Suit" Theory has gained traction in the scientific community over the last five months. Some believe that, while playing for the Dodgers in 2009, Belliard slipped Ramirez the female fertility drugs that caused the slugger to be suspended for 50 games in order to give his skin a more comfortable, smoother feel.

Others cite reports that throughout his career, Belliard has been seen standing in front of his locker saying, "Would you play me? I'd play me. I'd play me hard." 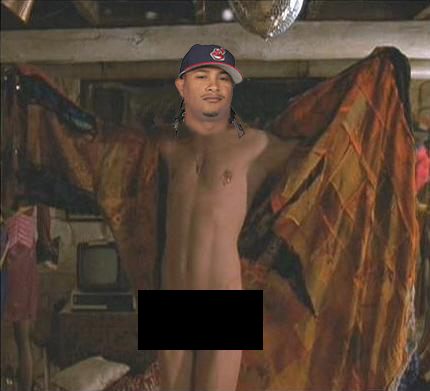 UPDATE 2: When confronted with these allegations, Belliard appeared to panic briefly before brushing back his dreadlocks and speaking to a group of reporters.

To make it to the Major Leagues, it takes hard work, determination, and, most of all, natural ability. Manny Ramirez's natural talent is hitting a baseball. My natural talent is impersonating Manny Ramirez. This is what I was born to do. Would you ask Manny to not be a great hitter? Of course not! ...At first, I was OK being called "Mini-Manny", but as time went on, I realized, to achieve my true potential, I needed to become Manny Ramierz!

With that, Mr. Belliard extended his arms with a flourish and took a bow, but stood up quickly as it appeared his dreadlocks were going to fall off. When he was asked about Mr. Ramirez's whereabouts, he responded with a glassy, distant stare.

"I am Manny Ramirez."

Whether the real Manny Ramirez is hiding away on a tropical island with Tupac and John Ritter, or lying in the cold, dark confines of a basement--yearning for death's sweet, sweet release--is of little importance to the Rays as they enter the 2011 season with Belliard as their starting DH.

As too many teams have discovered over the last few years, this seems to be just another case of "Ronnie Being Manny."

UPDATE 3: In related news, it has been confirmed that Johnny Damon never actually shaved his beard upon joining the Yankees in 2006, but is, in fact, aging backwards a-la Benjamin Button. News at 11.