How To Find a Cheap Diamond Without Mortgaging Your House

Share All sharing options for: How To Find a Cheap Diamond Without Mortgaging Your House

Shortly after the Rays were defeated in the 2008 World Series, Edwin Jackson was shipped off to the Detroit Tigers in exchange for Matt Joyce. Some were surprised by the departure; despite being left out of the post-season rotation, Jackson set a franchise record with 14 wins and was only 25 years-old. This was the first occurrence of a wonderful, recurring problem for the Rays: too much starting pitching. Two former first-round picks were waiting in the wings in Triple-A Durham - David Price (1st overall)  and Jeff Niemann (4th) - and Wade Davis and Mitch Talbot were banging on the door as well. Something had to give, so it was likely the Rays would either move Edwin Jackson or Andy Sonnanstine.

There were many different factors that went into the decision of who to trade. Jackson had just finished up his final season of team control, while Sonnanstine had two more seasons remaining before becoming arbitration eligible. Another determining factor was what each player could bring back in return. Sonny, a soft-tossing right-hander, completed a great 2008 campaign mixing up his four pitches to keep hitters off-balance. Jackson threw much harder and earned more wins, but most peripherals gave the edge to Sonnanstine. Jackson oozed potential despite only glimpses of greatness. We will never know if Sonny was shopped as well, but I feel pretty confident that Joyce is being better than anything the Rays would have received back for Andy.

Hindsight is 20/20 and Edwin went on to have two very good seasons producing 3.5 and 3.8 WAR (vs. 1.3 and 1.5 in the two prior seasons with the Rays) while earning $2.2 and $4.2 million. That's outstanding production for that price. Jackson is set to make north of $8 million this season and was involved in his third trade in three years, moving on to the White Sox. The Rays may have been well suited to hang on to Jackson, but at the same time, by trading him they acquired six seasons of Matt Joyce and made room for Niemann in the rotation. The Rays may not have fleeced the Tigers, but they were able to exercise risk minimization.

During the 2008 season, the Rays extended Scott Kazmir to the tune of three years- $28.5 million. In 2009, Kazmir's velocity continued a downward trend, his struggles worsened, and he found himself on the disabled list working with Rick Peterson. The extension began to look like an epic disaster for the Rays. Peterson was able to work some of his magic, buying Andrew Friedman just enough time to exercise his now famous, "Salary dump in the middle of a playoff race!!!" Scotty Kaz was worth -.8 WAR in 2010 in Anaheim while raking in a cool $8 million, with another $12 million guaranteed for 2011. (It's funny that Blue Jays fans don't seem to be describing the Vernon Wells deal as a horrible deal, and Wells was worth 4 WAR in 2010!) On the bright side, the Angels can buy Kazmir out in 2012 for $2.5 million.

This would have been masterful if the Rays had simply convinced the Angels to take on Kazmir's contract. That type of desperation could have made the Angels have second thoughts. Andrew Friedman needed a return to sell the deal - a package that included Sean Rodriguez, lefty pitching prospect Alex Torres, and Matt Sweeney. That's a whole lot of cost control, and Rodriguez's 1.9 WAR in 2010 may be more than the Angels ever see from Kazmir.

Edwin Jackson succeeded beyond the bay and Scott Kazmir has not. Combine their 2010 seasons and they were worth 3 WAR for $12 million in salary, about fair market value, a value the Rays won't be able to succeed against the big boys with. This year, Jackson and Kazmir will combine for $20 million. What's important is the Rays refused to get left holding the bag, to be the one left standing when the music stopped. They make this possible by stocking the system with young arms to step right in when the predecessors start to get more expensive.

With top pitching prospect Jeremy Hellickson waiting in the wings, the team executed this off-season's "salary dump": the Matt Garza trade. The Rays have now moved 3/5 of the 2008 World Series rotation and probably upgraded the rotation as a result.  What has all this salary dumping left us with? I leave you with this team-controlled graphic: 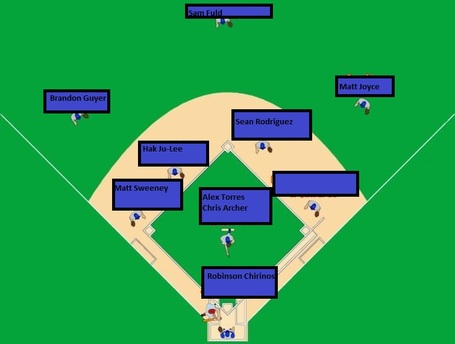