Share All sharing options for: Matt Garza for Prospects: A Lose-Lose Trade

As those in my support group can attest, I am not only a Rays fan, but a Cubs fan too. As such, I often wander down the cobblestone alleyways of the Internet's Red and Blue District when my day here at DRaysBay is done. The recent Matt Garza transaction has brought together these two strange worlds, that of my lover (the Rays) and my possibly-mentally-handicapped mistress (the Cubs).

And so, whilst many DRaysBay readers hum along in their Rays-only world, many miss out on the fascinating economic paradox Andrew Friedman and Jim Hendry created.

Behold! The reactions of the two worlds below the jump!

The Rays Lost on the Trade
Many in the blogosphere need not wait for the final player to be named or for time to weave its surprising tapestry; the pronouncement can be made now: The Rays were fooled! 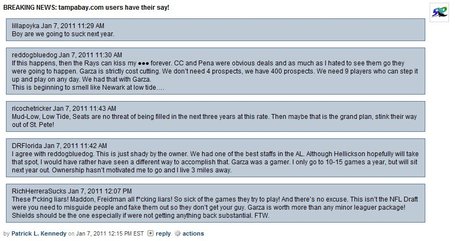 I'll be honest. I'm not terribly sure what BLOCKSTARJABO is trying to tell me, but the all-caps make it seem he's yelling, so I'm sure it's not good.

The Cubs Lost on the Trade
Meanwhile, in the cooler, if not frozen, heads of the Cubs blogosphere, there appears to be equal distraught: 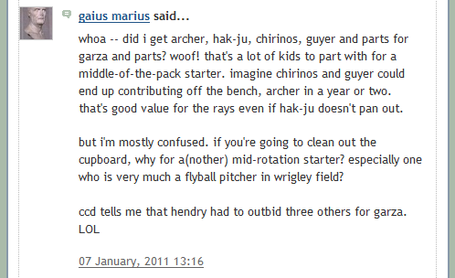 The chief writer of the venerable Rooftop View sighed forlornly:

And at Another Cubs Blog (the closest thing to DRB Cubs fans have), the users collectively committed Harry Carey (they drank themselves to death): 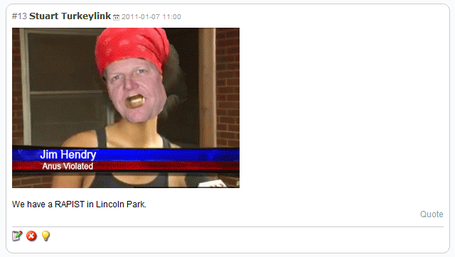 Here's the trooff: As a Cubs fan, I'm pained to see them trade away prospects for a pitcher of whom they already had several -- especially since he's going to a flyball-unfriendly park with an average-at-best defense behind him. As a Rays fan, I'm actually fine with seeing Garza go -- he was never one of my favorites.

But still: There is no such thing as a lose-lose trade. Most MLB trades tend to be win-win, just with varying degrees of win. Both teams were trading according to their situation: I think the Cubs suspect they will need starters in 2012 and 2013 (Garza will be around through 2013), and the Rays would prefer to put Garza's cash towards a DH (I've heard rumors of Vladimir Guerrero, uh, yes please).

Still, we are entitled to believe in what we want. Some may choose to believe in Santa Clause until their dying day. But I never believed in Santa, and I rather liked this trade (for the Rays).