Share All sharing options for: Wade Davis, The Reliever

How does pitching out of the bullpen affect Wade Davis? The answer is pretty self-evident 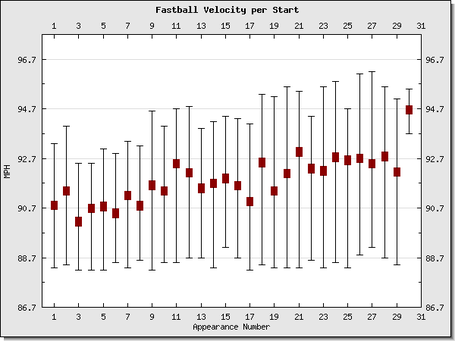 In his brief bullpen outing last night, Wade Davis cranked up the heat on all his pitches. Instead of averaging around 92-93 MPH with his four-seam fastball, he dialed it up to 94-95 MPH. He also threw his slider around 87-88 MPH, and even got his two-seam fastball up into the mid-90s (around 93 MPH). Sure, this is a small sample, but I think it's pretty obvious that when Davis wants to dial it up over short outings, he's more than capable of bringing some dominant stuff to bear.

I'm going to follow Davis's bullpen progress this postseason with extra interest, as the Rays have an absolute glut of starting pitchers right now. Next season, the Rays theoretically have 7 pitchers that could be in the starting rotation: Shields, Price, Hellickson, Moore, Niemann, Davis, and Cobb (and potentially Torres too). What do the Rays do with all these pitchers? Sure, they can trade someone this offseason, but even trading one starter would still leave quite the bottlejam.

So I think it's worth at least considering the possibility of moving Wade Davis to the bullpen. The Rays have him signed through 2014 for a very affordable price; the most he's set to make in one season is $4.8m. While he'd obviously be more valuable if the Rays could turn him into a successful starting pitcher, it's not as though he'd be expensive or over-paid as a reliever...especially if he became a dominant one.

This is a possibility we can talk about more in the offseason, but for now, keep an eye on Davis's relief appearances. If he has success out there, a full-time move to the bullpen may not be such a wild or crazy idea.