Share All sharing options for: Rangers Power? NO; Fear The Rays Power

The TBS announcers -- and frankly any one who gets a microphone in front of their gab -- seems to dote on the Rangers power, talking endlessly about the amazing Rangers offense and how Nelson Cruz bats whatever.

However, if you define power as bases per hit instead of bases per at bat, then something else shines through: The power of the Rays.

Power Factor (PF) is a statistic that my pal Lewie Pollis brought to my attention earlier this year. Hanselman then took a deeper look at PF with respect to the Rays, and the results seemed intuitive and correct.

In other words, the Rangers have a LOT more hits than the Rays (almost 300 more), but they hit more singles, the Rays hit more POWER:

But we still have one more confounding element in play here: That little replica of a real stadium they call Rangers Ballpark in Arlington.

But the effect seems too large to be mere stadium bias: 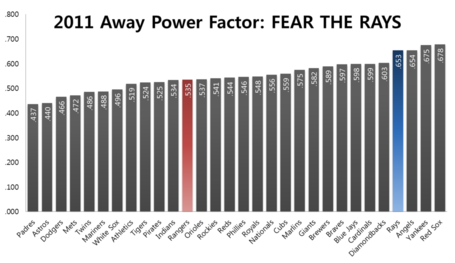 Not only do the Rays have the fourth-best away PF, but they are on a plateau of their own.

I suspect that, this series, we need to be talking less about the power Rangers, more about the Rays' power.