Financial Flexibility: What's the Current State of the Budget?

Share All sharing options for: Financial Flexibility: What's the Current State of the Budget?

As Rays fans, we all know about the importance of the yearly budget. While the Rays have been willing in the past to expand the budget when going all-in, even at the best of times the Rays have been constrained by their finances. They have never been able to afford signing big name free agents, and their high water mark of $72 million in 2010 was still middle of the road for a major league franchise.

But the Rays aren't likely to approach that high water mark again anytime soon. With the underwhelming attendance figures in recent years, the Rays capped their payroll last season at around the $50m mark, and it sounds likely that they'll do something similar this year. Whether you think that's fair or unfair, it's the situation we're in. Andrew Friedman won't be given free reign to spend this offseason, so if we're going to be rosterbating around here, we'd better be sure to do so responsibly.

So if we figure that the Rays have a soft salary cap of $50 million -- which might have some flex if the right deal comes along -- how much room does Friedman have to work with? 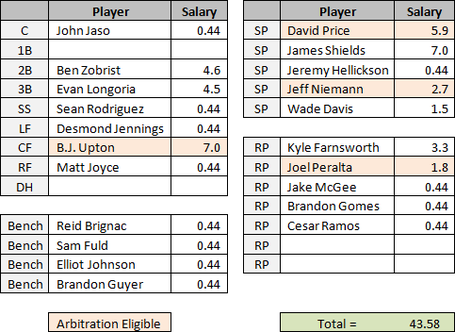 I attempted to fill in the Rays' roster as best I could, estimating which players the Rays are likely to bring back. For instance, Kelly Shoppach has a $3.5m option for 2012, but it seems unlikely that the Rays will exercise it. Meanwhile, I slotted in Shields, Farnsworth, Longoria, Zobrist, and Davis, as the Rays will undoubtedly pick up their options.

For the arbitration eligibles, I'm using the estimates provided by MLB Trade Rumors. They haven't made a big fuss about it, but they have a new arbitration forecasting system in place that was developed by Matt Swartz (formerly of BPro fame, now at FanGraphs). It's apparently been very accurate when running historical arbitration cases, so we can trust the numbers they provide as solid estimates.

Andy Sonnanstine and J.P. Howell are also both arbitration eligible, but it seems likely that the Rays non-tender them. Both could be resigned, but my assumption is that it'd be for no more than a minor league contract or a very small salary.

So the Rays are currently around $6.5 million underneath their soft cap, with holes at first base, DH, and in the bullpen.* Granted, the Rays could fill almost all those positions internally for very cheap, but I think the consensus is that the Rays want to add more bats this offseason. They won't have much budget room to work with, but if they trade away from pitching, it could open a large amount of space.

*My roster also doesn't have a backup catcher, so that's something else to consider.

The way I see it, the Rays could go any number of ways based on what sort of trade offers they receive. In my mind, Upton, Shields, Niemann, Davis, and Cobb should all be on the trading block, and then the Rays have enough flexibility to make whatever move looks the best to them. I'd love to be able to trade away Niemann for an impact bat, but that's more wishful thinking than anything else; the Rays will likely need to move Shields or Upton to get a big hitting prospect in return.

But all in all, the Rays are in a much better position this offseason than last. They don't have nearly so many large holes to fill, and their bullpen has a core of talent to build around. They could make few moves and enter next season with a borderline contending team, so this should hopefully be a positive offseason.