Monday Morning Rays Wrap Up: The Are You Kidding Me Edition

Share All sharing options for: Monday Morning Rays Wrap Up: The Are You Kidding Me Edition

It is hard to give tribute to the 3 games the Rays won versus the Yankees or how the Orioles took 2 out of 3 from the Red Sox. A season collapse that has led to the dismissal of Terry Francona and resulted in the Rays ending up playing in the AL Division Series. Let's take a quick look back at some of the great plays that finished a tremendous regular season. Take some time to watch the clips and read the quotes, as I prepared them I was stunned at all the action that occurred over the course of the week. 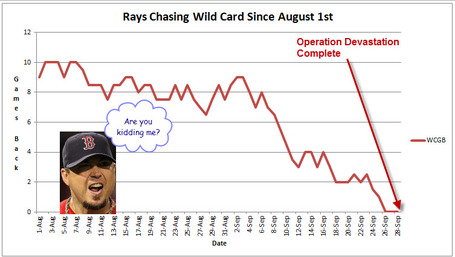 There have been many great moments in baseball history, but nothing can compare to the chain of events that led to the 3 minute separation between Robert Andino dropping a soft liner in front of Carl Crawford and Evan Longoria hitting his walk off playoff clinching home run at Tropicana Field. The reverberation of the shock in Boston is already being felt as Terry Francona has been asked not to come back as manager and there are whispers that Theo Epstein may be on his way to Chicago to take over for the Cubs. For this Monday morning, let's take a look back at possibly the most thrilling most unpredictable week not only in Rays history but in major league baseball history.
Weeks Highlights After the Jump:
Monday: Rays and Red Sox tied for Wild Card after Rays defeat the Yankees 5-2 and Baltimore defeats Red Sox 6-3.
The Rays fell behind 2-0 as Robinson Cano hit a solo homer in the first and a RBI single in the 3rd. The Rays came back with a 3 spot in the bottom of the third on a 2-RBI double by B.J. Upton and an RBI single by Johnny Damon. The Rays added extended the lead on a 4-2 lead on a Kelly Shoppach home run in the 4th inning and extended the lead to 5-2 on a Johnny Damon sacrifice fly in the 7th inning. James Shields worked 8.2 innings giving up 2R/2ER on 6 hits while striking out 3 and walking 2.
Meanwhile, the Baltimore Orioles entered the bottom of the sixth inning tied 2-2 with the Red Sox who were looking for their first back to back victories since August 27th. The Orioles had pushed across a run on a RBI double by Chris Davis off Red Sox starter Josh Beckett. Robert Andino came to the plate with runners at 2nd and 3rd and 2-out and hit a line drive to straight away centerfield. Jacoby Ellsbury went back on the ball and seemed to make the catch but lost it when he slammed into the wall.  Andino raced around the bases for a 3-run inside the park home run to put the Orioles in front 6-2. Andino's inside the park homer was the first by an Oriole in the history of Camden Yards. The Red Sox mounted a rally in their half of the ninth inning and had the tying run at the plate, but Jim Johnson got Adrian Gonzalez to fly out to left and struck out Jed Lowrie to end the game.
Joe Maddon on James Shields:

Shields has "been a tough guy from the time that I've met him," Maddon said. "I think that he has been able to learn to channel his emotions a little better. He's always been emotional, and sometimes that would get in the way. Now, he's able to feed that emotion into performance, and you're seeing him having a wonderful year. He's really a Cy Young candidate. I know what [Tigers 24-game-winner Justin] Verlander has done. But James' name has to be mentioned very well up there also."-mlb.com

Robert Andino on his inside the park home run:

"[Ellsbury's] a good center fielder, so first time I got out of the box, I was hoping either it got out or he doesn't catch it," Andino said. "He caught it, but he hit the wall and dropped it, so that's my cue to keep running." -mlb.com

Robert Andino on having his dad in the crowd to see him for the first time as a pro:

Andino's Inside the Park Home Run:
Desmond Jennings with a fantastic grab:
Tuesday: Rays defeat the Yankees 5-3 and keep pace with the Red Sox who defeated Baltimore 8-7.
The Rays jumped out to a 2-0 lead on a 2nd inning 2-run homer by Ben Zobrist off  Yankee starter Bartolo Colon The Yankees came back with single tally runs in the 3rd inning on a Russell Martin home run and in the fifth inning on a double play ball off the bat of Curtis Granderson.  Jeremy Hellickson got into trouble in the sixth inning and  issued a lead off walk to  Alex Rodriguez and a double to  Mark Teixeira to put runners at 2nd and 3rd with nobody out for Nick Swisher. Swisher sent liner to right centerfield but only scored 1 run because Teixeira went back to 2nd to tag up and was help up at 3rd. The Rays intentionally walked Jorge Posada to bring Russell Martin to the plate. Martin sent a groundball to Evan Longoria who could have attempted the throw home and on to first for the double play, thrown to the plate for the force out, or tried for the gutsy triple play. Longoria went all in and stepped on third to begin the around the horn triple play to end the Yankee rally.  The Rays were down 3-2 in the bottom of the seventh and Rafael Soriano issued back to back walks to B.J. Upton and Evan Longoria for Matt Joyce who drilled a 3-run homer to right to give the Rays the 5-3 lead. Jake McGee, Brandon Gomes, and Kyle Farnsworth worked the final three innings to preserve the victory for Jeremy Hellickson who worked the first 6 innings giving up 3R/3ER on 6 hits while striking out 1 and walking 5.
Matt Joyce on his 3 run homer and the Rays playoff run:

"It was probably one of the most exciting times you can possibly have on a baseball field -- in our town, two games left in the season, everything riding on the line, you're down a run, you know it was just a big hit," Joyce said. "We've had a chance for everyone to chip in all year, and everybody's done a great job of sharing those big hits.

"For me, I was struggling at the plate and a bunch of the guys kept picking me up saying, 'You're going to come through, you're going to get a big hit. Just relax, calm down.' It's awesome to be a part of a team that really pulls together." -mlb.com

Evan Longoria on his decision to attempt triple play:

Longoria said though Martin "doesn't run terribly for a catcher," in the Yankees lineup he's the one player "you have a chance" to turn a triple play on.-tbo.com

The Rays turn a key triple play:
Matt Joyce 3-run homer:
Matt Joyce Post Game:
Wednesday: Eureka as the Rays win 8-7 in 12 innings and Boston falls to Orioles 4-3 in bottom of 9th.
Words can not describe the events that transpired on Wednesday night at Tropicana Field and at Camden Yards in Baltimore. The Yankees up 7-0 in the 8th inning and the Red Sox take a 3-2 lead into the 9th inning where their record in games with a lead after 8 innings was 78-0. Nate Silver calculated the odds of the Rays winning AND Boston losing at 278 million to 1. The highlights of the evenings events are below.
Rays begin comeback with a 6 run 8th:
Dan Johnson, The Great Pumpkin....ARE YOU KIDDING ME???

Robert Andino with the walk-off single:

Joe Maddon on the Rays victory:

"I know it's big," Rays manager Joe Maddon said. "But I'm not there yet. I haven't wrapped my mind around it. We've been too busy trying to do this. I haven't grasped it all yet. I will at some point. I'm totally aware of the circumstances and the place in baseball history. But for right now, I'm not quite there yet." With one out in the 12th and Evan Longoria at the plate, the score flashed at Tropicana Field that the Orioles had defeated the Red Sox, 4-3, which meant a Rays win would get them to the postseason.-mlb.com

Evan Longoria on the home run:

"I just tried to step out of the box, take a deep breath," Longoria said. "Try and remember what we're playing for. Obviously we had an opportunity at that point to win and get into the playoffs. I mean, I'm thinking about getting on base and scoring a run."-mlb.com

Robert Andino on the Orioles victory:

"End of season like this, [to] make Boston go home sad, crying, I'll take it all day,"-mlb.com

Matt Wieters on the victory:

"It feels great," added catcher Matt Wieters, who, along with the rest of the Orioles and Red Sox, spent most of the 86-minute rain delay watching the Rays rally from a seven-run deficit. "To end the year like that is pretty special and that's something to take into the offseason, keep working even harder to where we can be celebrating like Tampa is." -mlb.com

Buck Showalter on the Orioles victory:

"From what I understand, Atlanta's feeling the same way right now," said manager Buck Showalter, who expressed some sympathy for Boston's plight. "It's a heartless game sometimes, but I've found out through the years that the baseball gods, so to speak, always let you up off the deck if you're true to what's right and you just keep grinding. They eventually will reward you for that, and I keep telling our guys that. It was nice to get a return for that here."-mlb.com

How they got there: MLB Productions look at Rays from Spring Training to Game 162.

Like the rest of the Monday Morning Wrap Up, SF1 discusses the final 3 games of the regular season:

And what a great day it is to be a Rays fan. While I normally recap the entire week, I decided to leave the LDS alone until we proceed into the LCS. And besides, i doubt it will hold the drama of the three games that got us there. From the triple play to Evan Longoria's game winning and playoff clinching home run, I have never seen such incredible drama, and for lack of a better way to describe, some divine intervention. How  does Robert Andino on Monday hit an inside the park HR, Jonathan Papelbon blow a crucial save with two outs no one on base in Wednesday's deciding game?

As for the Rays Evan Longoria truly earned the name given him by my friend RJ Anderson, Evan Elite. Not only does he start an unbelievable triple play, makes a great play tagging out Greg Golson who had strayed off third base on a ground ball to third with runners on first and third and no outs, hits a three run bomb and eventually the game and playoff clinching HR in the thirteenth inning.