Share All sharing options for: Team Runs Saved by Position

We all laughed at the sham that was the Gold Glove voting results as any real fan of defense knows that the annual Fielding Bible Awards organized by Baseball Info Solutions has a much better grasp on the process. A few weeks ago, BIS put a story up at USA Today looking at some of the best and worst run players at run prevention at each position.

Their methods are, "an estimate of each player's contributions on defense. Runs Saved evaluate a fielder's range, errors, throwing arm, double plays, and several other aspects of his defensive play into one number." This weekend, I was at the First Pitch Forums in Phoenix where BIS's Steve Moyer presented the Team Runs Saved by Position data for 2011. Before sharing the results, he shared several videos of defensive plays and asked the room to score hit or error. While the results were mixed, the actual outcomes were all the same -- they were all scored hits.

None of us should be shocked at the unfortunate state of official scoring at major league ballparks across the country nor should any of us be shocked that the Tampa Bay Rays led the league in team runs saved during the 2011 season.

The table below shows how each team is ranked overall and the exact scores by position (click to enlarge). 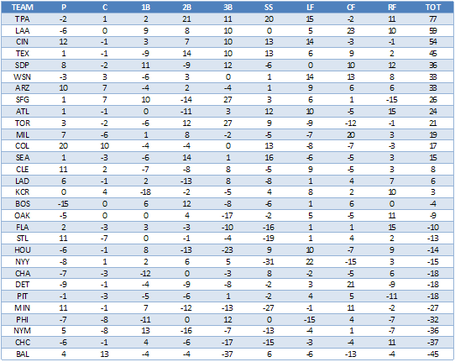 The Rays lost runs overall at just two positions - on the mound and in centerfield. Overall, the club led the league at both middle infield positions as well as combined infield defense. The results at catcher are better than expected but the results at first base are likely taking a few you by surprise given the adulation for Kotchman's work in the field this year. The presenter did include Kotchman as a "player likely to continue seeing regular playing time because of defensive value," because the score of 2 was still one of the 12 best scores in the league as 16 teams had no or negative runs saved totals at the position.

Overall, the Rays defenders ranked as follows for each position:

The high infield team defense combined with a strong outfield team defense was a big reason why the Rays' staff had a league-best .265 BABIP that was 13 points better than the closest competitor. Since clearing out the laughable infield defense of 2007, the Rays have a team BABIP of .278 over the past four seasons which is the best in baseball by eight points over the Dodgers, Mariners, and Giants.
If we focus within the American League East, the Rays stand up very favorably to the other four teams in the division (click to enlarge).

The Rays and the Blue Jays were the only team defenses in positive value and while the teams were just one game apart in the final standings, the Rays' team defense prevented 81 more runs than the Red Sox did over the course of the 2011 season. That number is dwarfed by the 122 run difference between the Rays and the Orioles.

When we look back at the improbable 2011 season and how the Rays made the post-season, it was not any one player, or play, or magic. It was a team effort and the team defense was integral to the overall success of the team and having top ten scores at seven of the nine positions on the field shows how well-balanced the club was for defense in 2011 and could be even better in 2012.