Looking into why Hellickson struggles against hitters that he should dominate.

Share All sharing options for: Jeremy Hellickson's Struggles Against Lefties

At 2:00pm this afternoon, the Baseball Writers of America will announce the 2011 Rookie of the Year awards, and it's entirely possible that Jeremy Hellickson will win the award for the American League. It's a competitive race this year with a large number of candidates that could win -- Michael Pineda, Mark Trumbo, Eric Hosmer, Brett Lawrie, and Dustin Ackley -- and we'll have more on how Hellickson stacks up with those players when the award voting is announced. While we're waiting, though, let's take a look at one of Hellickson's biggest struggles: left-handed hitters.

There have been many words written about Hellickson's 2011 season, so by now people should know most of the basics about him. Hellickson posted an exciting 2.95 ERA -- 17th best in the majors out of pitchers with 10 or more starts -- but his peripheral statistics painted a much gloomier picture. His 4.44 FIP and 4.78 SIERA all suggested that his ERA was unsustainable, and his 1.6 K/BB ratio was considerably worse than expected. As Brad has highlighted, Hellickson's strikeout rate should increase next season based on his whiff rate, so despite his poor FIP/SIERA scores, there is reason to be optimistic.

Up until now, though, we've neglected an important question: why was Hellickson's strikeout rate so low? Were hitters not swinging and missing at certain pitches, or was he attacking hitters poorly? Does he need to actively change his approach to increase his strikeout rate, or should it bounce up without any major adjustments?

In order to answer these questions, it helps to have an understanding of Hellickson's pitch selection. Hellickson throws four main pitches: a four-seam fastball, two-seam fastball, changeup, and curveball. His pitch use varies slightly between lefties and righties, but generally follows this breakdown:

For a right-handed pitcher, this sort of pitch use breakdown is odd. Changeups and curveballs both feature vertical break, and those sort of pitches are typically most effective against opposite handed hitters (in Helly's case, lefties). Meanwhile, pitches with horizontal break (like sliders) are most effective against same-handed hitters. Since Hellickson is a right-handed pitcher and his best pitch is his changeup, we'd expect him to be quite successful against left-handed hitters.

Except, that's not the case: 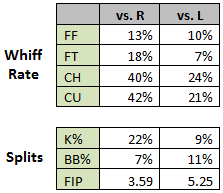 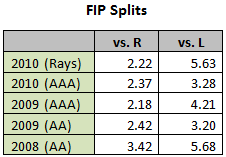 The encouraging news is that after given time to adjust, Hellickson has improved his performance against lefties at each level. The question is, what does he need to do in order to succeed at the major league level?

If I were Jim Hickey, I'd talk with Hellickson about adjusting his pitch use against lefties. I'm not sure why his changeup and curveball are considerably more successful against righties than lefties -- any ideas, everyone? -- but those two pitches are still more effective against lefties than his two fastballs. According to Hellickson himself, he throws a straight, low 90s fastball, so why does he throw it 60% of the time against lefties? It doesn't make much sense.

When you look at Hellickson's pitch selection by count, his pitch usage looks even worse. Against lefties, he throws his curveball almost exclusively in 0-2 or 1-2 counts. In every other count, he's primarily a two pitch pitcher: four-seam fastball and changeup. When a hitter only has to watch for one of two pitches, it makes it very difficult for a pitcher to fool them. Hellickson's changeup is a lethal weapon, but any pitch's effectiveness can be weakened through overuse.

By all rights, Hellickson should not struggle this much against left-handed hitters. He does, though, and he needs to figure this problem out if he ever wants to reach his full potential.

Thanks to the Joe Lefkowitz Pitch F/x tool and Driveline Baseball MiL Splits for the data.