Share All sharing options for: Hellickson Versus Lefties Follow-Up

Steve did a nice job the other day breaking down Jeremy Hellickson's struggles against left-handed batters. In the discussion that followed the article, a few of us debated reasons why and one thing that I speculated was that Hellickson's curveball was too much of a sweeper and thus gave left-handed batters a better look at the pitch and that was why his whiff rate on the pitch is less to lefties than it is to righties. The data from joelefkowitz.com shows us the following information on Hellickson and his curveball results against both types of batters:

He throws the pitch much less frequently against lefties and gets half of the swings and misses than he does against righties. Is Hellickson's curveball indeed "too sweepy?"

Thanks to my colleagues at Baseball Prospectus, we are able to look at how Hellickson's numbers against lefties compare to both his teammates and other pitchers that throw their curveball at least ten percent of the time. As it turns out, the pitch f/x data says that all five right-handed starters in the rotation featured the pitch at least that often so here is their data in the same fields as were presented for Hellickson:

The only other right-handed pitcher on staff who has nearly the same difference between frequency rate for curves to hitters is Niemann, but he actually throws his curveball more to lefties than he does to righties. Hellickson sees a 50 percent reduction in his whiff rate on curveballs when throwing to to lefties while none of his teammates see that degradation in results against lefties. Only James Shields has any kind of split and his is when he throws it to righties.

If we look at the raw results of the pitches from the BP data pull, we know the average slash line for the 66 right-handed starting pitchers that use a curveball at least ten percent of the time in 2011 is .265/.343/.423 with a 6.7 strikeout rate per nine innings and a .159 ISO. If we look back over the past four seasons for pitchers meeting that criteria (158), the slash line is .259/.320/.413. Hellickson's numbers are better than league average in all three, but his strikeout rate per nine inning against lefties was just 3.6 on the season which is well below the group average and leaves him both more reliant upon the team defense as well as more susceptible to undesirable batted ball outcomes.

Getting back to our initial premise, are his struggles to maintain whiff rates against the opposite hand due to the excessive horizontal break that his curveball has at times? Below are the horizontal plus vertical movement charts for each of the right-handed starting pitchers on staff. 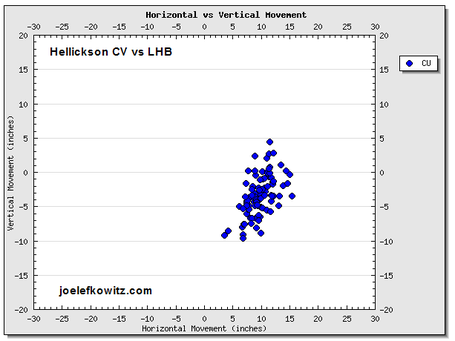 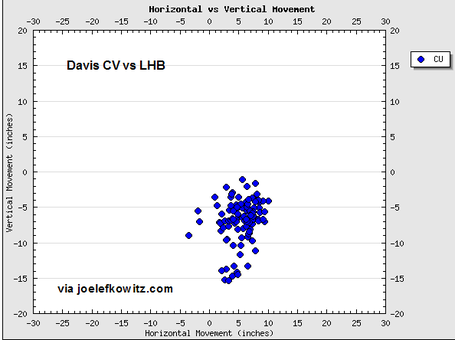 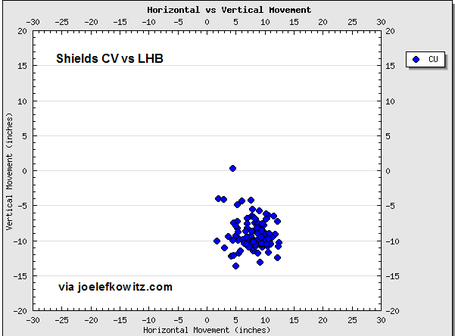 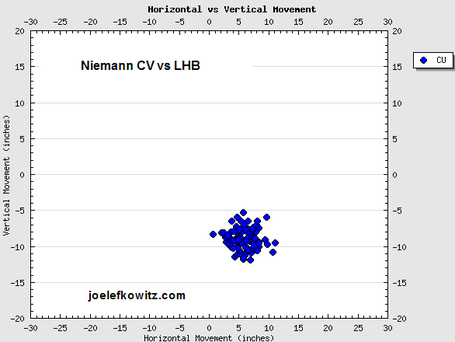 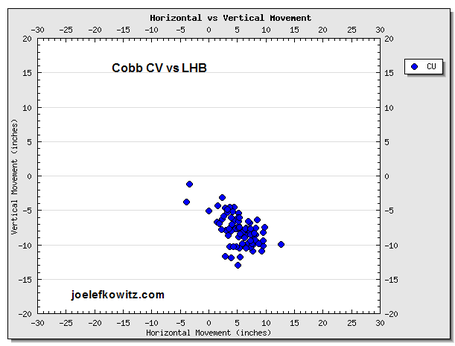 Note not only how many of Hellickson's curveballs are in the 10-15 inches of horizontal group, but how many are in the upper range of the vertical range compared to the charts of his teammates. His teammates' abilities to keep their curveballs down in the zone for the most part is a big reason why most of the curves they have thrown have not been hit for home runs while Hellickson has given up home runs to both types of hitters.Perhaps if Hellickson can tighten up his curveball and get it down in the strikezone, he could share in the successes of his fellow teammates against left-handed hitters.

Hellickson gets compared to Shields because how both feature excellent change-ups and command, and Shields would be an excellent model to follow for Hellboy. After all, Shields saw his batting average against left-handed batters increase every season from 2007 to 2010 from .243 to .255 to .272 to .286 last season thanks to throwing just his fastballs and changeups around 75 percent of the time to them as recently as 2010. This past season, Shields used his fastballs and changeup just 60 percent of the time while using his curveball  nearly as often as he did his four-seam fastball giving hitters another pitch to look for rather than just a fastball, cutter, or changeup.

Hellickson threw a fastball or a changeup to a lefty 83 percent of the time and saw a reduction in his whiff rates as hitters had less to look for. Like Shields before him, Hellickson adding another pitch to use against lefties, whether it be tightening up his curveball or changing where he prefers to locate it, would help give Hellickson reduce his splits between righties and lefties.