Throughout this off-season, we will be touching on the most sensitive of subjects in the market - the stadium situation. The situation is quite similar to most of the battles fought in World War I in that both sides are rather firmly entrenched into their positions and in the last two years, both sides remain essentially where they started. We have seen everything from a full report on the situation from a private group, to our earlier three-part-series on the situation, and most recently, a data-driven and well-informed fan post and discussion on the matter.

The fact of the matter is that eventually the two sides are going to have to leave their trenches and enter into the no-mans land in between where neither side has rarely been at the same time. Each side has taken their chance and run out into that area to make a point that is quickly shot down by the other side as acts of greed or petulance. Maybe some new data points from the most recent Census and Team Marketing Reports will help.

Seemingly the only people not moving to Hillsborough County these days are the Rays. Since 2000, Hillsborough's population has increased 23%, mostly in its outer edges. The data map below shows the difference by area in the region; the intense blue show the largest growth while the intense red shows the greatest declines (data via geocommons). 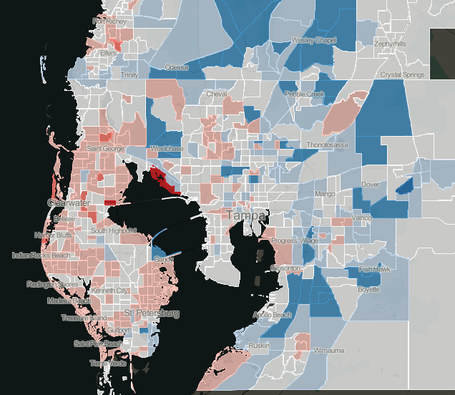 That map helps highlight why there is a 24% difference in population growth between the two counties as Pinellas has had a few pockets of population growth including the new housing developments adjacent to Tropicana Field, but Hillsborough saw huge areas of growth during the construction boom of the past decade.

Additionally, the differences in the demographics of each county is striking. The senior citizens of Pinellas County are some of the most dedicated Rays fans in the fan base as the Silver Rays group has been a long-running fan club for the team and several shuttles run from local retirement centers to Tropicana Field for each game. That said, having one-fifth of your population center on a mostly fixed-income situation is not an ideal situation as it limits ticket sales and attractiveness to potential corporate sponsorships.An additional part of building any fan base is to build the culture with the youth in the area and continue that momentum yet less than one-fifth of Pinellas County is school-age while Hillsborough is five percentage points higher.

If we combine the under-18 age group and the senior citizens of each area, the data shows (thanks, ReyL) that 39% of the Pinellas population is in those typically non-wage earning age groups while Hillsborough has 35.7% of its population in those two groups. In actual numbers, that gives Hillsborough County a 228,288 person advantage in the wage-earning age bracket of ages 18-64. The data above also shows us the mean household income (in 2009 dollars) is nearly $4000 higher in Hillsborough and that there are 0.3 more people per Hillsborough household than there are per Pinellas household.

Much is made of how successful the Tampa Bay Lightning are under the leadership of Jeff Vinik and point to the large crowds at the St. Pete Times Forum and the $35M in renovations Vinik has poured into the place to bring it up to level with other facilities in the National Hockey League. Why is Vinik's operation able to succeed in the same general market where Stu Sternberg is seeing declining attendance three straight seasons?

Teammarketing.com presents an annual Team Marketing Report prior to the start of each season that looks at average ticket prices, concessions, and parking. Its most recent data is prior to this past baseball season and prior to the 2010-2011 hockey season but here is how the Lightning and Rays stack up against their respective leagues as well as one another (click to enlarge).

We know that parking at Tropicana Field is not free for everyone, but it is free for some so that figure has to be taken with a little grain of salt. The Rays and the Lightning are essentially on the exact same page as far as being below the league average nearly across the board and despite the fact the average hockey ticket is nearly twice what the average baseball ticket is, one franchise is enjoying outstanding attendance while the other is at wit's end with attendance issues.
Same dollars, same general market, yet one franchise on one side of the bay flourishes while the other on the other side of the bay flounders. The population data and the financial differences between the two markets can only help the Lightning succeed as they leverage their own efforts against a larger and better financed population in close proximity to their place of business while the Rays are working with a more challenging situation with the market in close proximity to their place of business.