Infographic: When Is Andrew Friedman Most Active?

Share All sharing options for: Infographic: When Is Andrew Friedman Most Active?

After the Rays traded away John Jaso and signed Jose Molina earlier this week, I was left in a mild state of shock. I couldn't remember the last time Andrew Friedman had completed a trade this early in the offseason, even a small one like this, and I thought he normally liked to wait some time before signing players. But who knows, maybe my memory was wrong. It certainly wouldn't be the first time.

Thanks to graphics guru Josh Frank, though, we don't have to wonder any longer: 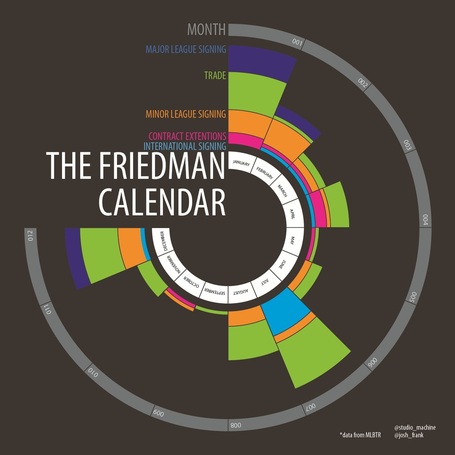 It looks like the Jose Molina signing was Friedman's first free agent acquisition ever during the month of November. Friedman seems to like letting the market settle some before making a free agent splash, but my guess is he wanted to jump on Molina quickly before other teams had a chance to digest the impact of Mike Fast's pitch framing study.

This has been an unusually active November for the Rays, so goodness knows what's ahead in December. Friedman is normally most active during December and January, although our intuition holds true: his busiest month of the year is January, late in the offseason and after the point where other franchises have called it quits. Therein lies one part of Friedman's success: he doesn't rush.

Any other observations? And again, a huge kudos to Josh Frank for putting this graphic together.