What does the Melky/Sanchez Trade Tell us about the Davis Market?

Share All sharing options for: What does the Melky/Sanchez Trade Tell us about the Davis Market?

At first blush, the Giants and Royals swap of Melky Cabrera and Jonathon Sanchez seemed like a slam dunk for the Royals to me which scared me about the potential market for Wade Davis. Before digging in to the numbers, I thought about Sanchez as the guy with electric stuff whose results often belied his abilities. Similarly, Cabrera in my eyes was the former top prospect whose poor approach (and seeming conditioning, work ethic, defense, etc. issues) failed him. There was also this:

Melky's poor defense in CF and approach had clouded my ability to honestly examine the trade. I went back and took a look at the actual numbers each player had produced over the last 3 years (my typical time-frame for analyzing what I think a player's current abilities are and for projecting forward). Looking at that, it seems more and more like the deal was very even. Below is a table that shows each player's last 3 years of WAR from Baseball-Reference and Fangraphs along with an average of the two. It also shows the three-year average for each as well as a simple MARCELS projection for going forward.

After diving in to the numbers, it seems that the swap of these two players was pretty much swapping two players of similar value . Of course, though, when looking at trades you can not just look at what the perceived value of the players are on yearly basis and call it a day. The other aspects are of course cost, contract status, and potential draft picks. Addressing the cost is fairly straight-forward; while neither have contracts in place, both are arbitration eligible and MLBtr projects their costs at $4.4 million for Cabrera and $5.2 for Sanchez. This is both players last arbitration season, so they both have one year of control left. In the same vein, both players are projected to be Type B FAs if they keep up their current performance. So the only difference between the two in the cost, contract, compensation portion of their value is $.8 million in projected salary. That, coupled with Melky's better recent performance, is probably why the Giants had to throw in a fringey prospect (Ryan Verdugo is considered to be a LOOGY prospect).

So how does this relate to Davis? Well, it looks like Davis should fetch a player that has similar value in every way. In theory a player that matches his WAR projections, cost projection, and contract status should be exactly what we're looking for in return. So what exactly does that look like?

Wade Davis is entering his third full season as a pro. In a little over 2 seasons he's been worth 2.6 bWAR and 2.3 fWAR. He's seemingly a 1-1.5 WAR pitcher at this point in his career if he progresses no more. His cost/contract status is a little trickier. Because he signed an extension last offseason, we know exactly what he'll cost from here until 2014 (then he'll either be arbitration eligible for 1 more year or there are three one- year team options). This is preferable for a team because they know exactly what Davis will cost for each of the remaining seasons. It's difficult for us as analysts to find a match because so few players have a similar contract. To try to examine Davis's worth on the open market, I put the following table together with the free agent starting pitching class of 2011 that signed for more than $1 million dollars: 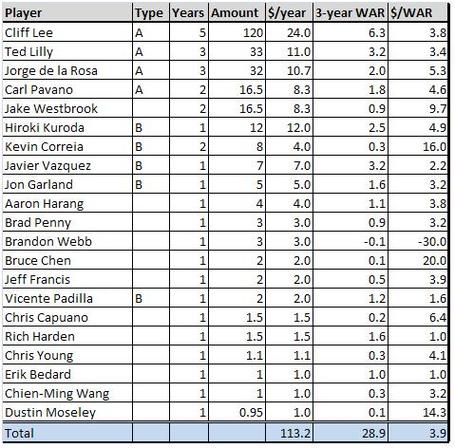 This illustrates that a free agent starting pitcher costs about $3.9 million for each free agent win obtained (ignoring costs of acquisition like picks forfeited) in 2011. This is a very rough number because of the small sample size, but if we look at it as a framework to view Davis's deal, then we see he will be cost effective for the guaranteed years (3/$9.1) as he makes less than what 3 1-win seasons should cost. In fact, if Davis averages 1.5 wins/season over the three years he'll provide about $8 million in surplus value ($3.9/win * 1.5 wins * 3 years is $17.55 million). He should also make less than we'd expect if these were arbitration years if he averages 1.5 wins using the 40% of WAR-value in the first year, 60% in the second, and 80% in the third. So at worst, we can consider Davis worthy of a player of equal value entering his first arbitration year; though I'd guess he's worth quite a bit more given the additional control (either 1 more arb. year or the three options with only the final one having a buy-out).

A lot of people have bandied about a number of names for potential 1B with control, and I've identified four of which here that seem like good fits: Lucas Duda, Kyle Blanks, Yonder Alonso, and Logan Morrison. Below is a quick glance at what their career WAR/150 is (using both fWAR and bWAR), their first arbitration eligible season, projected WAR (merely WAR/150 for as many seasons as they're controlled), and their projected surplus value (total WAR at $4.5 million per win less their cost which I figured at $.45 mill. for non-arbitration seasons and 40%/60%/80% of WAR value for the arbitration seasons).

Using the same calculations for Davis at 1.5 WAR/year and $4.5 mill./WAR, then Davis has a surplus value of 11.2 without considering the options or the fact that he could also receive arbitration in 2016 and build more surplus value. That puts him nabbing Duda easily, and the Rays could make a play at the others depending on how the teams value Davis's future performance as well as their player. Davis's cost being set should also make hima  bit more attractive to teams that think he is due for a breakout performance after leaving the tough AL East.