With Matt Moore's shiny new extension in the books, the big question on everyone's mind is, "Well, who's next?" There was much discussion on Friday about locking up a number of players on the Rays, so I figured I'd kick us off by looking at the extension scenarios for two other pitchers: Jeremy Hellickson and David Price.

When you look at all the long-term contracts the Rays have given out to their starting pitchers, it becomes quite easy to notice a trend: 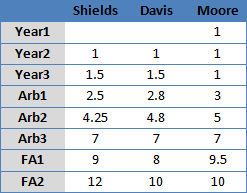 *Note: All numbers represent salary in millions. Sorry for the lack of identification there.
**All three deals have the option years kick in at the Arb3 level.

Before getting to Hellickson, two quick thoughts. When you adjust for inflation, the Rays are getting an even better deal with Moore than they got with Shields. And man, the Davis extension looks so blah when sandwiched between these two deals. He'll probably (hopefully) still be worth the guaranteed portion of the deal, but that just goes to show how good a deal the Rays are getting on Moore and Shields.

When looked at through this prism, it becomes easy to see what type of deals the Rays are willing to make, and how much risk they are willing to take on when it comes to young pitchers. Hellickson would have to agree to a deal somewhat around the same terms as Shields or Moore if he wanted to ink long-term, and I'm not sure if he'd be willing to do that. Since Scott Boras is his agent and he has such a high prospect pedigree, odds are he wouldn't be as willing to take less money now.

But still, c'mon Hellboy...doesn't this sound like a happy guy?

"I had to basically make up my mind, was it worth it. I feel like the risk is being shared on both ends and I'm happy where we are.'' (Matt Moore, provided by Marc Topkin)

As Tango shows, the risk is being shared very equally. Come on in, Helly, the water's fine.

Let me be upfront about this: the odds of the Rays signing Price to a long-term extension are slim to none. Despite Price's recent comments on Twitter about being open to a deal, I don't see the two sides as being close enough to make it work.

My reasoning? Price is already entering his first of four season of arbitration eligibility, and odds are that he'll make somewhere around $6-8 million this upcoming season. If he continues to follow the lofty career path of a front-of-the-rotation starter, he'll likely see salaries around these lines over the next six seasons: 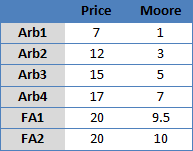 Note the side-by-side comparison with Moore's current deal. Price would have to take a significant discount to sign for a deal that somewhat approximates the standard extensions the Rays' give to starters.

Then again, the Rays shouldn't be concerned with inking Price to a deal just like Moore's; they should try to get him at a similar discount level. If you follow the general discount plan that the Rays gave to Moore -- 30% discount for the first three years, 40% in year four, 50% in year five, etc. -- you end up with something like this:

I'm assuming the Rays would want the final three years to be team options, meaning it would essentially be a three year deal worth around $25 million. That's not a huge discount off what Price is in line to get anyway, but it would be enough to allow the Rays to keep him around for another couple of years..maybe.

This deal would be considerably more expensive and risky than the Rays have yet done with a pitcher, so even though it seems like a decent middle ground, I can't see either side agreeing to it. Price will likely want more money at this stage of his career, and the Rays would probably be hesitant to make such a large investment in a pitcher. Price is great, but a guaranteed $10.5 million salary in 2014? If Price gets injured or flops, he'd be eating up 1/5th of the Rays' budget room that season and essentially torpedo the year.

So as sad as it is to admit, neither Hellickson nor Price seem like good fits for an extension. Either one could happen, but it would depend on the player being willing to take a steep discount on what he's expecting to earn otherwise. I don't see the fit.