Picking up where we left off yesterday, let's look at the extension prospects for three offensive Rays today: Desmond Jennings, B.J. Upton, and Matt Joyce.

Since the Rays waited so long to call him up this past season, Jennings still has six full seasons of team control left. It's possible that he might qualify for Super Two status under the new CBA rules, but that seems unlikely since he got called up so late in July. As such, let's look real quick at the other extensions for Evan Longoria and Matt Moore, the only two players the Rays have extended for all six years of their team control: 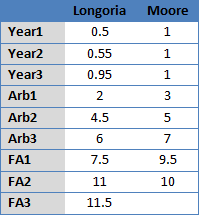 *The final three years of each deal are team options.

As you can see, the Rays were willing to make a slightly larger and longer commitment to Longoria; his deal was guaranteed for six seasons at $17.5 million, and Moore came in a year less and $3.5m poorer. This is probably a result pitchers being inherently riskier investments than position players. They're tougher to forecast and injuries can be more of a concern, so generally speaking, it's okay to make a slightly larger investment in a hitter.

That said, Jennings shouldn't expect to get an offer any larger than Moore's. He's reaching the majors at a later age (25 years old in 2012), and he's had numerous injury issues in the past. It's possible that the Rays would be more hesitant to offer him a long term deal due to those injury issues, or that they'd want to start up the team options sooner like Moore.

Carl Crawford signed his extension with the Devil Rays before the new management took over, but the framework for that deal mirrored Longoria's current deal almost to the letter (although it had one fewer team option). Jennings has been compared to Crawford many, many times, so it should be easy for the Rays to draw comparisons between Crawford, Longoria, and Moore when talking with Jennings.

If it was me, I'd offer Jennings something like Moore's current deal (5 years, $14 million), and then tack on two option years. Why only two? Jennings will be 30 during his final year of team control, so the Rays might be able to sell him on an extension by pointing out that this contract would guarantee him money while still making him a free agent in his prime. He could go the Crawford route -- secure your future in case of injuries with your first deal, and then break the bank with your second.

Is he likely to accept such a deal? Eh, tough to say. Jennings also has Boras as his agent, and I can't think of a single Boras client that has signed a contract extension this early in their career. Jenning's injury history might work in the Rays' favor, though, since it makes his future more risky.

The Rays have never signed a player to an extension this late in their career. They normally make deals before a player even reaches arbitration for the first time, as they have more leverage then and can make deals that involve a smaller amount of guaranteed money (AKA: less risky).

So I view the idea of signing Upton to an extension as unlikely. Possible, but unlikely. The Rays would have to pay near market rate to sign Upton to a deal right now, as he's going to be a free agent next season, and he's expected to get $7 million in arbitration this season. In other words, there's no reason for him to sign a deal that pays him less than $7 million this season and more than that in future years.

Would signing Upton to a 4 year, $37 million extension be possible? Certainly. Upton is a 3-4 WAR player with the potential for more (yes, he still has potential, I suppose), so signing him for $10 million a year would be below market rate. But still...I can't see the Rays doing that. If Upton got injured or tanked, a guaranteed salary of $10 million a year would be a large handicap on the team (remember Pat Burrell?). Upton also hasn't been particularly well received in the Tampa Bay area, so I'm not sure I see a "hometown discount" in the future.

Finally, we reach a promising target. Joyce has all the markers of an ideal extension candidate. He was not a top prospect coming up through the minor leagues, and he reached the majors for good at an older age (he'll be 27 next season). He's an undervalued player by most, yet he still contributed nearly 4 WAR to the Rays last season in only 500 plate appearances. He's got power, speed, plate discipline, athleticism -- he's a great player to have, but the Rays can likely lock him up at a discount.

The Rays have Joyce under team control for four more seasons (one team control, three arbitration), so Ben Zobrist's current extension seems like a near perfect match:

Zobrist signed his contract around the same point of his career that Joyce is currently at. He was one year older, but he was also going into his final year of team control before hitting arbitration. Of course, it's not a perfect fit as both Zobrist and Joyce have had different career paths -- Zobrist exploded out of nowhere, while Joyce has consistently and slowly developed -- but I think the overall fit is good.

The big question, though, is how much Joyce would stand to make in arbitration if he went year to year, and how much of a discount are the Rays getting here. Honestly, this depends on how Joyce develops going forward. He has impressive power and could have hit 25+ home runs if given 600 plate appearances, and those sort of stats are looked upon favorably in arbitration hearings. I would imagine that a low end arbitration comparison for Joyce would be B.J. Upton ($3m, $5m, $7m), while he could make considerably more than that.

So if Joyce were to stagnate, the Rays likely wouldn't save much with this sort of an extension -- although they would still be paying less than market value -- but Joyce is also a safer bet than most players due to his older age and clean development. I could see the Rays spreading the money around a bit more, offering him a four year, $16 million deal with a breakdown of $1m, $3m, $4.5m, $5.5m and two club options with similar totals as Zobrist ($2 million buyout). This would be insurance for Joyce in case of an injury or if he never solves his left-handed pitcher problem, and it'd be a great value contract for the Rays.

Anyway, I've put way too much time and thought into this already. What say you guys?