Is there hope for Wade Davis? (part one)

Share All sharing options for: Is there hope for Wade Davis? (part one)

The Rays have a lot tied up in Wade Davis's future. They've signed him to a long term deal that could keep him in Tampa Bay through 2017, but at this point, it's no longer clear if that would be a good thing, as he's been unable to replicate the success of his rookie year where he posted a 3.72 ERA and a 2.90 FIP.

A little while ago, there was a discussion in one of our threads that went something like this (I'm paraphrasing).

Benderbrodriguez: Wade Davis is not a very good pitcher, and probably won't become one. Anyone who thinks so is a moron.

Mr. Maniac: I'll take the bait. I think he's got potential. There are signs that he's turned a corner. I can see it with my eyes.

Benderbrodriguez: You're a moron. He doesn't strike people out, he doesn't even miss bats. He doesn't get ground balls. Use the data, not your lying eyes.

Personally, after watching 388 innings of 4.22 ERA (4.61 SIERA) ball, in which Davis struck out 5.89 batters and walked 3.20 per nine innings, I'm in the "Wade Davis Is Mediocre" camp. But I don't think Mr. Maniac is a moron, and I'd really like for him to be right. And after all, Wade Davis was always a highly regarded prospect, and comes with a decent (not overwhelming) minor league record. So here's an attempt to find, in the stats, that progress that Mr. Maniac thinks he sees.

For this exercise, I've separated Wade Davis's career into four time spans: His rookie year of 2009, when he looked like a rising star (36.1 IP); his sophomore year of 2010, when his strikeout rate fell, his walk rate rose, and an improvement in BABIP failed to save him from his peripherals (168 IP); the first part of 2011, when his velocity went away (101.8 IP); and the latter part of 2011, beginning with his start on July 22, when the velocity came back (78 IP). I am not including his 2011 and 2010 playoff appearances. All data is from Fangraphs or from Joe Lefkowitz.

Before I begin, I'm going to declare my sample sizes. They're dissimilar, and some are uncomfortably small, so I thought it best to make it clear exactly what I'm working with up front. Take all appropriate grains of salt.

When he came into the league in 2009 at the tender age of 23, Wade Davis posted a fantastic strikeout rate of nearly a batter an inning. We soon found out that this was unsustainable (we probably should have known this given that he hadn't struck out that many in any season since 2007 in AA). His strikeout rate reached an all time low in the first part of 2011, but did in fact rebound in the second half (during which time Davis cut his walk rate to an all time low).

That graph is comforting to look at, especially if you subscribe to the idea that a line drawn between two data points is a trend. The cutting of walks in the second section of 2011 is especially good to see. It tells me that when he regained his lost velocity, he didn't sacrifice any control to do so. He's not broken, so let's hope the Rays training and pitching staff can figure out how to get Davis throwing 94 mph in his first start next year.

Taking a look at handedness splits, the situation gets even more interesting. We can see that when he first entered the league, Davis absolutely destroyed right handed hitters, striking them out more than ten times per nine innings. He was less effective against lefties, but still decent. Since then, though, he's actually been better at striking out lefties than righties, something I really didn't realize at the time. And while in 2010 and the first part of 2011, the increased strikeout rate against lefties was accompanied by a higher walk rate, by the end of 2011, Davis had almost stopped walking lefties entirely. This suggests that something has changed either in Wade Davis's stuff or his usage, and it will be the primary focus of Part II. 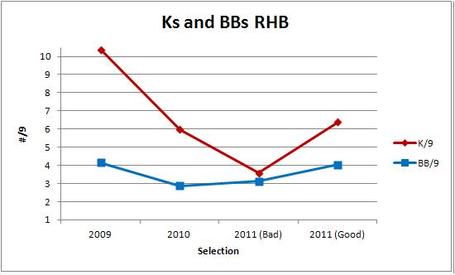 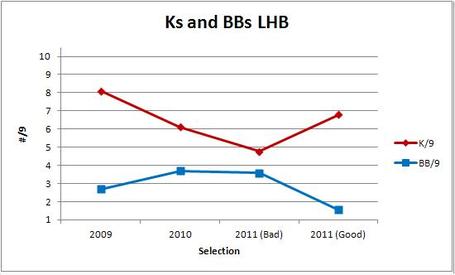 I'm not ready to chalk Wade Davis's flip flop in K% splits up to a deterioration or development of stuff or approach just yet, though. Over large sample sizes, past strikeout rate should be a better predictor of future strikeout rate than swinging strike percentage is, but we're not always dealing with those sample sizes here. The following graphs look at Wade Davis's swinging strike percentage (swinging strike/total pitches). I've separated pitches that came with two strikes from the rest of the sample, as the interaction between batter and pitcher changes a little bit once the count gets to two strikes. The value of a third strike is elevated above the other two and batters tend to expand their strike zone. 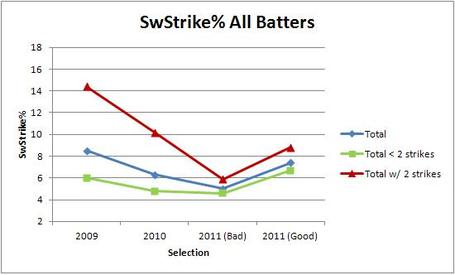 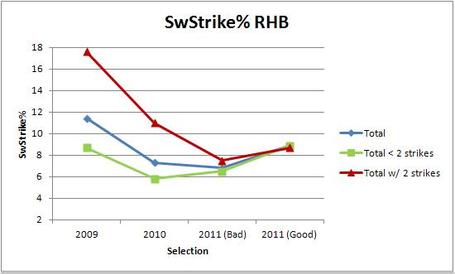 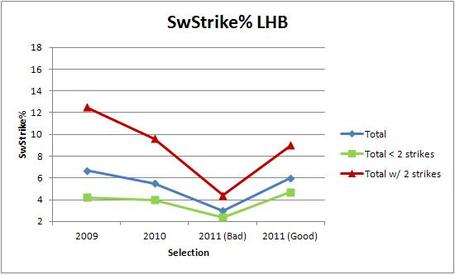 This is rather striking. In 2009, when a he got a hitter to two strikes, Wade Davis was really able to put him away with a third swinging strike. As time went by, he seems to have lost that ability, especially to right handed batters, where in the "Good" section of 2011, he actually got the third swinging strike at a worse rate than the other two swinging strikes.

I think this information is significant, but I don't actually know how. In the past, whenever I've looked at how the pitcher-batter matchup changes throughout the count, it's been from the batter's point of view. I found that for a given batter, the selection of pitchers throwing him pitches in pitcher's counts is liable to be better than the selction throwing him pitches in hitter's counts. I assume that the inverse of holds true, and that the group of batters to which Wade Davis threw two strike pitches is worse overall than the group to which he threw one and no strike pitches. I don't how much that accounts for, though. Here's what I think are the possible conclusions:

Note: For those wondering at Wade Davis striking out more lefties than righties in the end of 2011, but having a lower swinging strike percentage. It's explained by his called strikes. He gets much more called strikes against lefties (from backdoor breaking balls, I assume - that's a Part II question).

To help explain what's going on with Wade Davis with two strikes, I also looked how many balls are being fouled off. Way back in 2007, Pizza Cutter did a great little investigation of foul balls. What he found is that for batters, foul ball percentage with two strikes has a positive correlation with contact percentage, while foul percentage with less than two strikes has a negative correlation. This means, roughly, that good contact hitters are able to make good contact when they swing with less than two strikes (the batter would rather the foul ball be a ball in play), but that once they get to two strikes, the foul becomes a tool to stay alive. 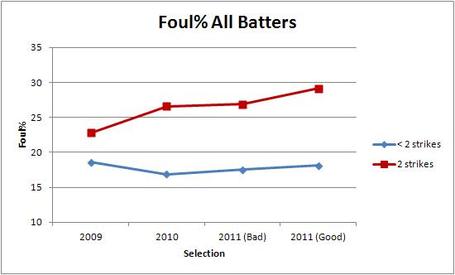 Sure enough, as time has gone by, Wade Davis has allowed more two strike pitches to be fouled off while the number fouled off with less than two strikes has remained similar (never as high as in those halcyon days of 2009). And the worst ration he's ever posted came in the section of 2011 that I've designated as "good." This doesn't give me all that much hope for Davis's return to rookie form. 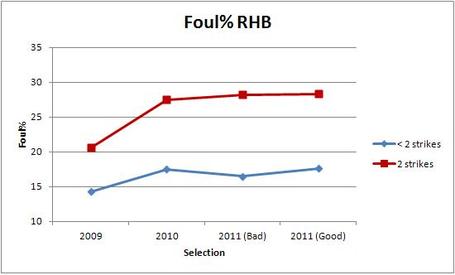 Breaking it down by handedness, it's pretty clear that all those two-strike count swinging strikes Davis got in 2009 against righties have changed to fouls, and I don't personally see them switching back. 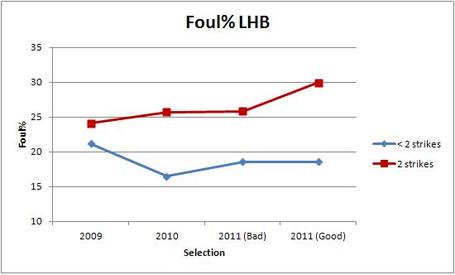 It's less clear against lefties, but once again, the overall trend is away from "nastiness."