We now have less than 68 days until pitchers and catchers report, so our long national past-time nightmare will not last as long as it already feels. The only thing that makes the off-season go by quicker are the research annuals put forth by different publishers and my two favorites are the 2012 Baseball Prospectus and The 2012 Baseball Forecaster from Ron Shandler and his team at BaseballHQ.com.

True story—the shelving unit I had in my closet that housed my copies of those books throughout the years actually collapsed last April from the weight. That unit contained both books dating back 10-plus years as well as Baseball Between the Numbers, and every issue of the Baseball America Prospect Handbook as well as John Sickels’ Minor League Handbook. Some people pass the offseason watching the NFL; I pass it reading a lot of baseball material.

What I enjoy most about these materials is finding research or player opinions within the books that lead to more self-reflection and investigation. Even after all of these seasons writing about baseball, I learn many new things each off-season. For example, if I were to ask you the correlation between pitches per plate appearance and batting average, you would likely postulate that the more pitches a batter sees, the higher their batting average likely is. Thanks to the work by BaseballHQ's Paul Petera, we know the opposite is true. His work has shown that the groups with the lowest pitches per plate appearance (P/PA) have the highest batting average. What was most interesting about Petera’s research is the following season, those batters that had a low P/PA total and a low batting average in year one showed a very strong likelihood of rebounding batting average while those with high P/PA and batting average showed a slightly stronger chance of a declining average in year two.

Batting average is far from the best category to judge a player's production, but it does tend to come into play when determining playing time. After all, a guy in a 5 for 40 slump is going to lose some playing time and a 9 for 78 start cost Dan Johnson his spot on the 25 man roster this past season.

Using the statistical engine over at Baseball Prospectus, I pulled the P/PA totals and batting averages for all hitters since 1988 that have had at least 300 plate appearances in a single season. Here are the total counts of each grouping of P/PA as well as the mean batting average for that group: 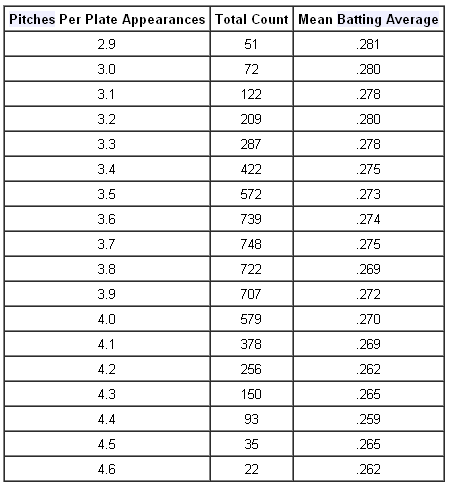 If we were to look at those numbers by range, here is how they break down:

For each of the past three seasons, the league average for pitches per plate appearances has been 3.8 while the major league-wide batting average has been between .255 and .262.

Most people typically look at batting average on balls in play when trying to quickly predict what a player's batting average will be the following season. The quick and easy theory of .290-.310 being the norm for hitters falls apart for some hitters that can come above that mark year after year as Ryan Howard did his first three seasons in the league while others come in below that mark as Casey Kotchman did for three straight seasons from 2008 to 2010. Still, the theory applies rather well to many hitters, but combining it with Petera's research that shows how P/PA are a strong leading indicator of predicting batting average success in year two would give us two quantitative ways to look at hitters rather than relying on deceiving eyes or gut feeling.

Overall, the Rays were a very patient team as only Brignac was below league average in terms of pitches per plate appearance. In fact, the Rays tied with the Yankees for team P/PA average and both teams were just .03 behind the Red Sox. The lower P/PA total gives hope that Brignac's average will improve as does the fact he had a .317 BABIP in 2010 and saw that drop 63 points last season but to be fair, his average cannot get much worse than the .193 he hit last season. The rest of the team was on the high side of pitches per plate appearance and only Longoria stands out from a BABIP perspective.

If we consider 3.8 as the average and deviate 0.2 points either way to determine low and high P/PA totals, nobody falls in the low range while Zobrist, Joyce, Rodriguez, and Jennings are all on the high side which reduces their odds of seeing a batting average improvement.. Given that none of those guys hit any higher than .277 last season and each one of those players projects to be regulars, the team faces an uphill climb against the odds to raise its team batting average of .244 that was 14 points below league average and better than only Seattle last season. The correlation between P/PA and OBP works as well as one would expect as Petera's work shows that those with P/PA totals of 4.0 or higher had an average OBP of .360 compared to the .321 OBP for those with P/PA totals below 3.5. The informed Rays fan has watched this correlation play out the past several seasons as the team batting average has routinely been in the lower half of the league while the team's overall offensive production has been in the top half. 2012 could very well be a fifth year of that trend.