Yes, that's right: the Tampa Bay Rays now have their first 30-year-old starting pitcher since Jae Wong Seo started 10 games for the Devil Rays back in 2007. If Shields gets a start for the Rays in 2012, he'll become only the third pitcher 30 years old or older to start a game under Andrew Friedman's tenure. Any guesses on who the third mystery pitcher is?*

In general, Andrew Friedman has eschewed players over 30 years old: 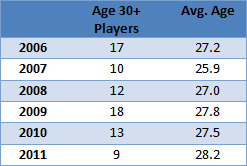 This data is a bit misleading, though, because I counted every player listed on the Rays on their B-Ref team pages, even if that player only received one or two at bats with the Rays that season. In general, most of these 30+ players have either been in the bullpen or bench, although there are a number of notable exceptions: Carlos Pena, Pat Burrell, Jason Bartlett, Julio Lugo, etc.

Another interesting point: the 2011 Rays were a much older team than I would have guessed. I suppose that's what happens when you're forced to bring in cheap veterans to fill holes while your young players develop (see: Damon, Manny, DanJo, Kotch, Farnsworth, and Peralta).

Now that the Rays' younger-than-30 starting pitcher streak is over, let's turn our attention to an even more impressive run. During the course of his tenure running the Rays, Andrew Friedman has never signed a free agent starting pitcher.** Never. Not once. Every single starter that the Rays have used from 2006-2011 has been either homegrown or a prospect acquired in a trade. And considering the depth of young starting pitching that the Rays currently have, I don't see this streak ending anytime soon.

Anyway, all this is meant to say: Happy B'day, Shields! You may be the old fart on the team, but we like you anyway.

*It's Mark Hendrickson, who had 13 starts for the Devil Rays back in 2006 before being traded away.