Toby Hall officially retired from the game yesterday. If you're like me you weren't aware that Hall hadn't already retired. He spent the 2011 season with the Camden Riversharks of the Atlantic League. His last MLB at bat came in 2008 with the White Sox in 2008. He spent seven seasons with the Rays, playing in 586 games while amassing a line of .262/.298/.382. He made a little over $5 million in his time in Tampa Bay; pretty good considering the performance. His team record for games played by a catcher should stand for sometime. See ya, Toby 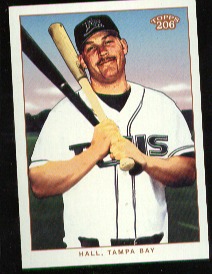 -Over at Baseball Prospectus Ben Lindbergh takes an interesting look at just how difficult it's become to be a successful General Manager, appropriately titled "Keeping Up with the Friedmans."

-From MLB Trade Rumors, apparently Roy Oswalt has told teams he's willing to take a one year deal, which certainly increases the number of potential suitors. Teams such as the Yankees and Red Sox, each with glaring rotation vacancies, could use a veteran like Oswalt.

-Also from MLBTR, the Red Sox may have interest in free agent outfielder Andruw Jones. The Yankees still seem like the favorites to sign him, though. It looks like he'll be staying in the AL East one way or another. He can still mash left handed pitching, posting a .400 wOBA last season against southpaws.

-I know we have some hoop-heads out there. Podcast maven, Carson Cistulli, has a discussion with ESPN NBA analyst, and all around basketball nerd, Tom Haberstroh at FanGraphs. Mr. Haberstroh is also pretty well versed in baseball, having been introduced to the world of sabermetrics by our own Ryan Glass while the two attended Wake Forrest University.

-If you are a subscriber to SiriusXM, Collette will be on MLB Network Radio tonight at 9:30 ET representing the site as he and host Mike Ferrin break down what the Rays have done so far and what they may do before camp starts.