Baseball America has just released their 2012 top 10 prospect list for the Rays, and there aren't too many huge surprises on the list. You can find the full article from Baseball America here, but here's a quick side-by-side comparison between this year's list and last year's list: 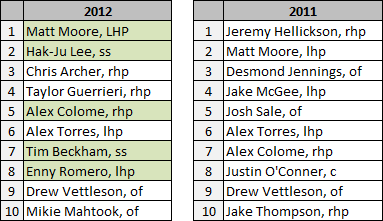 The players that are in green rose in the rankings from last season, just in case that wasn't obvious. Hak-Ju Lee was rated third in the Cubs' system at the time of last year's rankings, so his impressive 2011 campaign allowed him to rise even higher in the Rays' deeper system. Meanwhile, Chris Archer was rated as the Cubs #1 prospect by B.A. last season, so he's taken a slight tumble after seeing such little improvement in his control.

One of the most interesting parts of this list, though, is Tim Beckham's ranking. Remember how everyone was writing Bex off as dead in the water a few seasons ago? He's since "revived" his career and made it to Triple-A last season, where he had the gall to have a modicum of success (.325 wOBA in 111 plate appearances). He has lots of work to do still, but B.A. is giving him a lot of love this year by ranking him #7 -- up from around #15 last season. I tend to think that many of us are bullish on Beckham compared with the rest of the prospect world, but the Rays Prospects guys had him at #9 on their 2012 list. So maybe it's finally cool to like Beckham again?

But no worries, we have a new first round draft pick "bust" to argue about relentlessly: Josh Sale. He fell off Baseball America's top 10 list after a disastrous 2011 season in which he displayed little power in Rookie League, so I'll be watching his 2012 season a little bit more critically.

Anything else grab you about the list? I have a feeling Enny Romero's ranking is going to be a bit contentious.