What Would It Take to Trade Longoria?

Share All sharing options for: What Would It Take to Trade Longoria?

The issue was raised in the Rays Tank this morning after a new source for rumors on Twitter mentioned something yesterday. My immediate reaction was to laugh uncontrollably because Longoria is without a doubt the best team contract in this sport and arguably all of the major sports. As Jonah Keri pointed out in a piece over at Grantland earlier this month, Fangraphs has dubbed Longoria the best value in baseball for four straight seasons. The latest comments from Dave Cameron really bring it home:

Yes, this is getting old. Even I would love to see someone else at the top of the list. But, the reality is that he’s one of the best players in the game (third in baseball in WAR over the past three calendar years) being paid like a utility infielder. He makes $2 million this year, $4.5 million next year, $6 million the year after that, and then the team options kick in; $7.5, $11, and $11.5 million respectively. If (when) all the options are picked up, the Rays will owe him $40 million over the next five years. He might not be as good as Bautista right now, but the age and salary difference make up for the gap in performance, and so Longoria retains his spot at the top of the list. This contract will eventually run out, and someone will dethrone him as the King Of All Trade Value, but it didn’t happen this year.

Longoria has been paid approximately $4M over the past four seasons and Fangraphs values his production at $117.1M. That would be like you or I going to a garage sale, picking up a box of baseball cards, and pulling a mint condition T-206 Honus Wagner out of the stack.

Simply put, it is tough to imagine any kind of scenario where a player under the friendliest contract in the sport could be part of a blockbuster trade to another team. After all, Longoria's production and price have been a linchpin to the success this team has had over the past four seasons. Other teams are paying $4M for their backup catcher while the Rays are getting 29 times what they have paid out in production for the same price.

The English proverb tells us that, "An idle mind is the devil's workshop," and since we have absolutely nothing else going on related to the Rays this week (or last week, or the week before), let's take a look at what a trade involving Longoria would look like.

Beauty is in the eye of the beholder, but luckily for us, Sky Kalkman and Victor Wang have helped to qualify trade value. Kalkman constructed a Trade Value Calculator in 2009 to help us frame out net profits from player production. Wang did extensive research and calculated the value of prospects as ranked by Baseball America and John Sickels. Those values are shown in the image below: 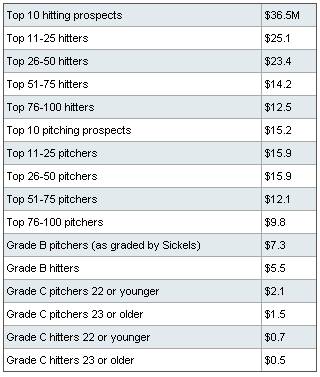 Using the financial data and projected WAR value from Baseball Prospectus in Kalkman's calculator, this is how the next five seasons of Evan's career could play out: 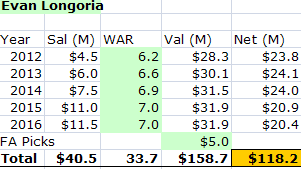 The $5M figure added on is the value of Type A draft picks per Wang's research as well. Even with the change to the collective bargaining agreement, Longoria would still bring that type of draft pick should he leave via free agency. If you think that the projections are aggressive, consider the fact Longoria's WAR totals (via BPro) over his first four seasons were 4.4, 6.6, 6.9, and 6.7 last season in a season shortened by an oblique injury and hampered with a nerve problem in his foot.

Longoria's contract has been an incredible value so far and if he plays to his projections in the coming years, it will continue to be a bargain for the team. $118M in net value is a lot of value to make up in a trade for any team.

Say, for example, the Nationals wanted to acquire Longoria in a trade. Ryan Zimmerman would surely be part of any deal, but how is he valued in a trade? Using the same inputs as we did for Longoria, Zimmerman's value over the next two seasons is not as rosy. 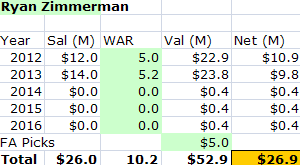 That still leaves us with a $91.3M gap in net worth between the two players. Even if we throw in two top ten hitting prospects, that still leaves us with a gap of $18.3M. It takes adding a top ten pitching prospect ($15.9M) to get us nearly equal in terms of net value. On paper, that's Zimmerman, Bryce Harper, Anthony Rendon, and someone like A.J. Cole if he were still with the organization. That package would a middle of the order hitter now as well as two more for up to six seasons each and a projected front-half starting pitcher for one player. Zimmerman alone is being paid 65 percent over the next two seasons what Longoria is under contract for over the next five seasons.

If the Rays are indeed fielding calls about Longoria right now, it is because they're just as bored as we are this month waiting for Scott Boras and his clients to start signing contracts and bring this free agent season to a close.