Share All sharing options for: Evan Elite? You Bet.

One of the most entertaining series over at BeyondTheBoxscore is Adam Darowski's series on using wWAR (or weighted WAR [The Genesis of wWAR]) to answer the question "What would the Hall of Fame look like if it was populated exclusively by stats?" Darowski has used wWAR as the objective metric to determine Hall of Fame credentials rather than subjective vote. The final result were used to create the Hall of wWAR.

When the data for third baseman was revealed in the Hall of wWAR: Third Baseman installment I began to wonder how good was Evan Longoria relative to the great 3rd baseman discussed in the article? Darowski points out that 3rd base is one of the most underpopulated positions in the Hall of Fame but shifts to one of the most populated in the Hall of wWAR. Could I use wWAR as an objective metric to demonstrate exactly how elite Evan Longoria has been early in his career relative to other 3rd baseman in the history of baseball? For now, let's borrow from Adam Dorowski and briefly demonstrate the components of wWAR.

wWAR uses Sean Smith's Rally's War (rWAR) because this was the first WAR going back to 1871 and Darowski prefers the rWAR model over the Fangraphs WAR (fWAR) for pitchers. The three components of wWAR are Wins Above Excellence (WAE) and Wins Above MVP (WAM).

WAE is a statistic introduced by Sean Smith in an article titled Andre Dawson and two contemporaries. The idea behind WAE is to use a rWAR of 3.0 as a base and give the player credit for any rWAR over 3.0. Darowski points out that:

This takes just the player's years as a productive player and cuts out the false starts as a 19 year old or the few seasons of part time play in their 40s where they tried to hang on too long. I mean, if Ted Simmons retired five years earlier, he would have been worth 53.2 wins instead of 50.4. WAE won't penalize him for that.

WAM is something Darowski developed because he felt that 3.0 was a bit low to define "excellence". He points out that the average MVP rWAR is 7.62. But, even though 7.62 is the average MVP rWAR value not even 50% of the MVP winners reached this number. Looking at the list of MVP winners he notes that 73% of winners were able to reach the 6.0 rWAR value so he uses this as a baseline. The final wWAR formula is:

To demonstrate the simplicity of calculating wWAR we will calculate Evan Longoria's wWAR value.

WAE includes all rWAR above 3.0.

WAM includes all rWAR above 6.0

In order to obtain a suitable list of 3rd baseman to compare with Longoria I used the baseball-reference.com play index and specified players in their first 4 seasons who played 75% of their games at 3rd base and accumulated greater than 10 WAR. In addition to the results of the play index I wanted to make certain data was collected for all 3rd baseman in the Hall of Fame and players honored in the Hall of wWAR: Third Baseman series were included.

Using the same relative amount of plate appearances, how does Evan Longoria rank all-time in wWAR among 3rd baseman? First let's look at Evan Longoria versus the current 10 members of the HoF. Longoria is certainly off to a great start to his career relative to the HoF class with only Mike Schmidt, Eddie Matthews, Frank "Home Run" Baker, and Wade Boggs off to better starts. 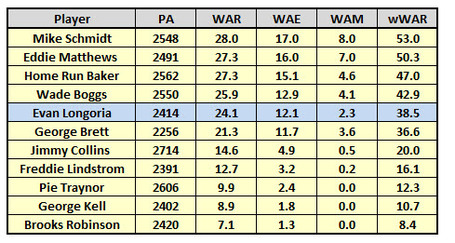 The following is the Top 25 and the list is led by Dick Allen who spent the early years of his career at 3rd base before making the switch over to 1st base.

Finally, how did Longoria fare against the Hall of wWAR members (including the two members Chipper Jones and Scott Rolen who will be entering when their careers are finished) who aren't already in the HOF? 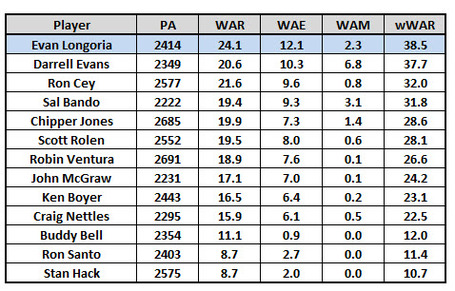 Longoria is off to one of the best starts of any 3rd baseman in the history of the game but to leave his mark as one of the greatest 3rd baseman of all time he is going to have to avoid injury and continue to perform at a high level. For perspective, the Hall of wWAR includes 18 members and their career wWAR range from Mike Schmidt's 193.8 wWAR to Deacon White's 50.1.