The Matt Moore contract news today was an early holiday present to Rays fans as the crown jewel of the farm system is now under team control until 30 years old. Matt Moore is also now financially set for life regardless what happens to him physically at this point and gets more money than a 245th overall draft pick could ever imagine making at the major league level. He and the other 46 players picked at that spot in the draft since 1965 have a combined value of just 12.7 wins above replacement according to Baseball-Reference. If Moore pitches as the Rays project him to with this contract, he could double that sum by the end of the 2014 season.

Jeff Passan of Yahoo! noted on Twitter today, the Rays could potentially own the best player contract in the league from 2008 to 2019 between what Evan Longoria signed for through what Moore just signed today. The individual deals are beneficial for both team and player, with the team coming out further ahead most times. Compare that to free agency when teams are often forced to pay players for what they have done rather than what they can do. When that happens, you are stuck with contracts such as the ones Alfonso Soriano, Vernon Wells, and Carlos Lee have right now. It should be no coincidence that the General Managers that signed those deals are no longer employed in that role in baseball. Meanwhile, Andrew Friedman has signed yet another deal that gives the Rays the financial flexibility to remain competitive in the American League.

The individual impact of the Longoria deal has already paid immediate dividends, but when you lump it in with the deal signed today and into similar deals signed by James Shields, Carl Crawford, Wade Davis, and Ben Zobrist, the desired outcomes are more transparent.

Moore became the sixth player to sign a pre-arbitration deal with the Rays that eliminated the arbitration process as well as some free agent time by giving the Rays team options to exercise. Jonah Keri noted in his Grantland piecetoday that the Rays first attempted this process with B.J. Upton but were rebuffed. Instead, Crawford became the first player to sign such a deal followed by Shields, Longoria, Zobrist, Davis, and now Moore.

Crawford's deal was played out in its entirety as the Rays exercised the team options in the deal until he became a free agent after the end of the 2010 off-season. If the Rays hold true with that pattern and exercise each team option in the deals with the other five players, they will have controlled those six players nearly as long as Jamie Moyer has been alive. 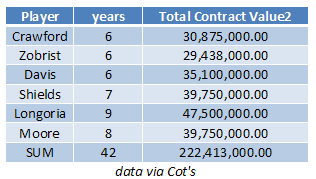 42 years of player control for six players, for a sum that comes in $34M less than what the Angels just paid one player to control for the next ten years. That sum is also just $20M more than what the Yankees total team payroll was this past season. While other teams are investing in assets that rarely produce the return they were paid to produce, the Rays have chosen to invest in pre-agency and pay players for what they project them to do as long as they can convince that player to do so.

In an ideal world, David Price would be the next player on the list so the team and player can avoid the arbitration process this off-season and work together to come up with a way to both reward Price for his contributions and help keep the team competitive moving forward. If Price is not open to that process, the team can also work with players such as Jeremy Hellickson, Desmond Jennings, and Matt Joyce.

The downsides of pre-agency deals are minimal in comparison to the downsides of free agency deals. If the player does not develop as the team projects or incurs a serious injury, the team can buy out the options at a small cost and move on. As the Rays learned in 2010, if the free agent simply cannot produce as Pat Burrell was doing, it costs the team a large sum of money to either bench the player or cut the player to move onto the next one.

Free agency and the deals that Jose Reyes, C.J. Wilson, and Albert Pujols signed this week are fun for the news cycle and the fanbases that receive those players, but pre-agency is what the Rays have to continue to do in order to stay competitive with the growing payrolls and talents of its American League competition.