Lineup Versus Lefties: Who Will Maddon Play?

Share All sharing options for: Lineup Versus Lefties: Who Will Maddon Play?

In the wake of the news that Joe Maddon plans to platoon Matt Joyce in the beginning of the season and use him against certain reverse-split lefties, I thought it would be interesting to look at how Maddon could best optimize his lineup against left-handed pitchers.This sounds like such a straightforward question, but the Rays have such a flexible defensive roster, it takes a bit of work to find which alignment would be the best both defensively and offensively.

Let's start with the obvious selections, and then see what holes we have to fill: 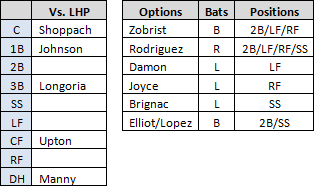 You could argue that Dan Johnson doesn't deserve an automatic start versus lefties, but you have to take into account that his regressed platoon splits actually show him as well above-average versus lefties, and there aren't many other great options. If you don't play Johnson at first, then it means you have to slide Damon or Zobrist there and play either Joyce or Elliot/Lopez (whichever one makes the roster). For the sake of this analysis, let's assume that DanJo is safely enmeshed at first base to start the year (EDIT: See below if you need convincing).

That leaves us with four open positions for six potential players. While Maddon may use a multitude of defensive alignments depending on the specific pitcher, let's tackle two possible scenarios: a generic lefty starter and a reverse-split lefty.

Note: This analysis relies heavily on the offensive statistic Weighted On-Base Average (wOBA), which is essentially an improved version of OPS that is put on the same scale as OBP. For more information, read up on it at the Saber Library.

Before we start putting names into defensive slots, we need to give ourselves a baseline of comparison: how good are all these players offensively against lefties, and how good are they defensively at each position? To answer the offensive part, we can use each player's regressed wOBA splits to estimate their value versus left-handed pitchers, as provided by Jason Hanselman. Below, I've taken each player's regressed wOBA split and turned it into Weighted Runs Above Average (wRAA) per 150 plate appearances - basically, showing how many runs a player would add (or detract) on offense if they played all year versus left-handed pitching.

Of course, don't take these numbers as 100% accurate truth - they're solid estimates. Rodriguez, Joyce, Elliot, and Brignac all have a mere handful of plate appearances at the major league level against left-handed pitchers, so mentally adjust their numbers slightly if you'd like. For example, I don't think Brignac's true talent level against lefties is that bad - I'd put him closer to .290-.300 - but that may be just me.

Zobrist and Rodriguez look like they should be playing everyday versus left-handed pitchers, while Joyce actually looks favorable in this light. Of course, there are other factors to take into consideration here: Joyce is a young player and Maddon is trying to build his confidence, and it's possible that the Rays have reason to believe he's actually worse against lefties than these numbers show.

Now, let's take a look at defensive ability. I've tried to estimate how many runs above average each player is at every position, but keep in mind that these are mere estimates. Considering that many of these players have only played a small sample at each position, it's tough to get a good read in every case:

With the offensive and defensive sides both accounted for now, it's time to put some lineups together.

We already know that Maddon does not intend to start Joyce against every left-handed pitcher yet, so we can cross his name off the list. That leaves us with five players to choose from for the four defensive positions: Zobrist, Rodriguez, Damon, Briggy, and Lopez/Elliot.

While there are many different ways you could theoretically align these players, if we discount the absurd (like starting Lopez at shortstop), then the decision hangs on the question of if you start Brignac at shortstop or not. If you don't, then the lineup writes itself: you put Rodriguez at shortstop, Damon and Zobrist in the outfield, and Lopez/Elliot at second base. If you do start Brignac at short, then instead you can put Rodriguez at second base, and Zobrist and Damon in the outfield.

Which option provides more value? That's tough to say since in each case you're trading offensive and defensive value, but we can use our estimates from above to get an idea: 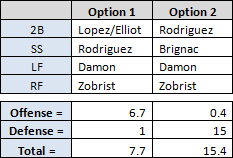 So even though playing Brignac means the line-up loses some offensive punch, you're trading that offense for a more optimal defensive alignment and a better overall team. These numbers validate what my gut tells me: go with Option 2.

Now that Joyce is in the picture, things get more crowded. If we pencil Joyce in for right field, that means we have Zobrist, Rodriguez, Damon, and Brignac fighting for three spots. Does it still make sense to play Brignac at shortstop in this case, or should we slide Rodriguez in there instead?

Although it looks like Option 2 has the advantage, I think you could reasonable make a case for either option here. For example, if you don't think Brignac is as bad offensively against lefties as projected or you think Zobrist is better in left field than average, you can adjust Option 1's total up higher. Also, if you think Rodriguez is worse at shortstop than the -2 runs I have him pegged at, then that drops Option 2's total.

This is close enough that I'm willing to consider it a draw. I'd lean toward Option 1 myself, since I think Briggy is better against lefties than those numbers and I like the idea of Zobrist in left field, but I also wouldn't be surprised if Brignac sees some days off against certain left-handed pitchers.

So in the end, here are the two alignments that as of right now I would choose:

In retrospect, that's a lot of work to come up with something not all that radical. Well played, Steve, well played.

Anyway, what are your thoughts? If you were Maddon, how would you construct your defensive alignment against left-handed pitchers?