The Rays Will Not Score Any Runs This Year

Share All sharing options for: The Rays Will Not Score Any Runs This Year

Yesterday morning, Intrepid Boy Reporter Play-On-Words and his slovenly valet Suttree swooped down to sunny Port Charlotte, Florida, where they Never Forget and the Rays broke out the fungoes and the L-screens for a little training. It was an enchanted day of spring baseball, filled with close and rewarding encounters with the bright lights of the Rays universe and opportunities to nob hobs with the baseball power elite! What follows is a photographic chronicle of our adventures. Inquiries regarding personal tutelage on the Nikon CoolPix L100 should be directed to me via email. 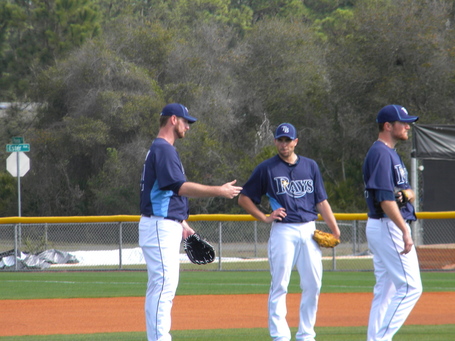 As the dewdrops shivered in the first morning breeze over Charlotte County Sports Park, the Rays pitchers took some much needed fielding practice. In this image, Jeff Niemann is illustrating the finer points of gloving slow choppers to an attentive Andy Sonnanstine. The Big Nyquil had alighted in town from a retreat to the pitching mounds of the Far East, where Greg Maddux had bestowed upon him tomes of instruction so powerful and secret that they can only be read by the light of a passing comet. Wade Davis is seen to the right with very poor posture.

More after the jump. 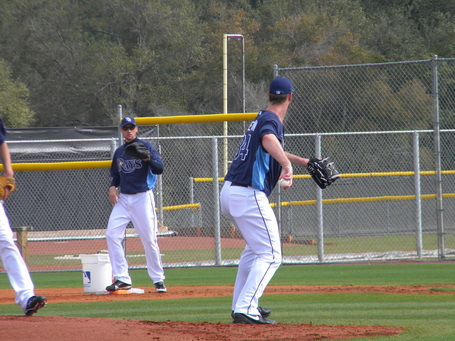 Niemann makes it look so easy! By the way, all I have are Niemann pictures. None of the other players moved as gracefully with pants full of 'baccy cans. 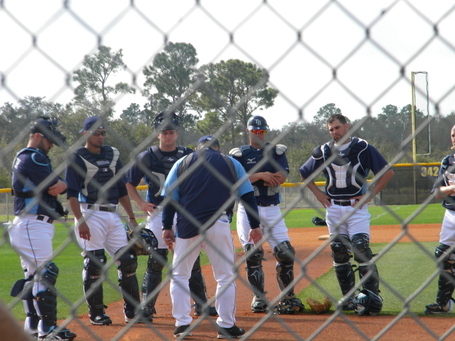 In the above, "The American Dream" Bobby Ramos provides Kelly Shoppach, Robinson Chirinos, and their catcher peers with a few tips on the Dougie. The catcher second from right, who I could not identify, is positively over it. 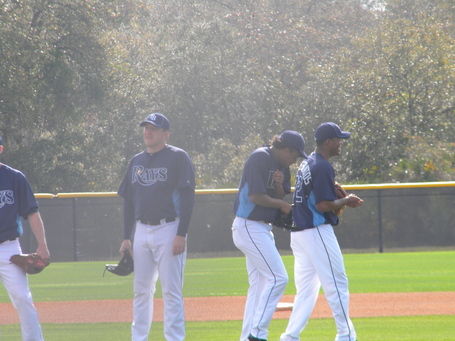 On another field, a different group of pitchers were put through rigorous fielding paces. The rigor is obvious by the effort Chris Archer, second from right, puts into keeping himself from collapsing or sneezing all over Richard De Los Santos. Adam Russell, center, has never played baseball before. 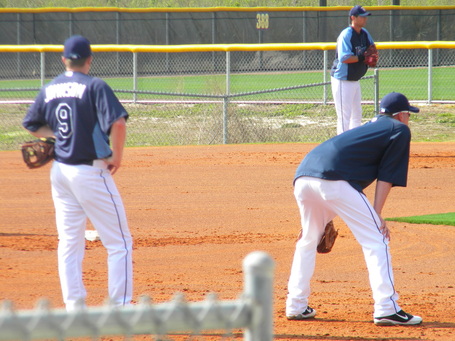 Seen in the rear ground of the photograph, Casey Kotchman takes infield with Reid Brignac, Sean Rodriguez (not pictured), and Evan Longoria (not pictured, but I swear to God, man...he was there). This was announced as the Opening Day defense. Elliot Johnson will play fifth infielder, directly behind Brignac, standing exactly like a saucy little teapot. Freaking Joe Maddon, right? 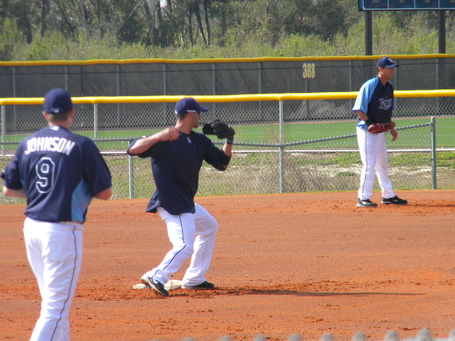 ACTION SHOT! Sean Rodriguez turns a double play destined to shatter the sternum of the opposing team's first base coach, as Kotchman shows off the reflexes of a mongoose (with its mongoose legs severed and the rest of its legless body somehow trapped in a pit of maple syrup and sewage). 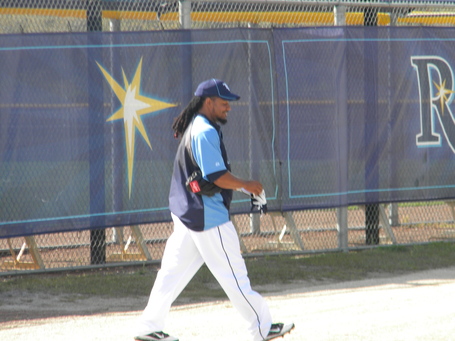 Not Carl Crawford strides to the batting cages. 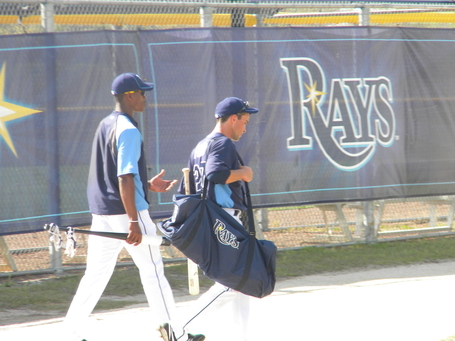 BJ Upton's personal caddy, Samuel Fuld, conveys the wing-footed centerfielder's array of striking implements to the cage for a lesson on how to hit sliders from right handed pitchers. Student, meet Teacher. 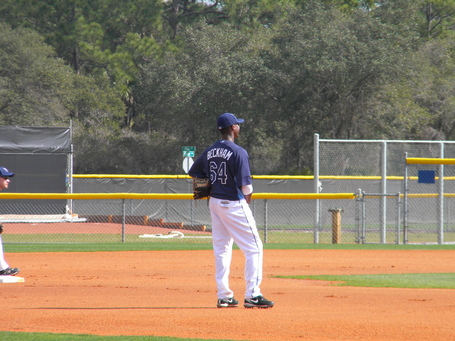 Meanwhile, this is Tim Beckham. He is laughing. Baseball is a joke to him. 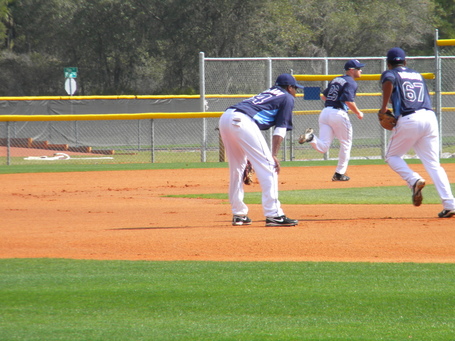 This is the ass of organizational depth. 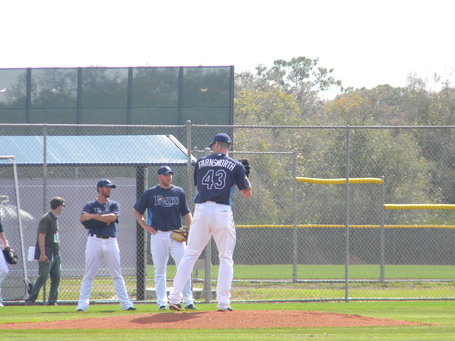 Seen above, reliever Kyle Farnsworth demonstrates the process of throwing a fastball to James Shields, who is typically disinterested. I guess he's just got it down. 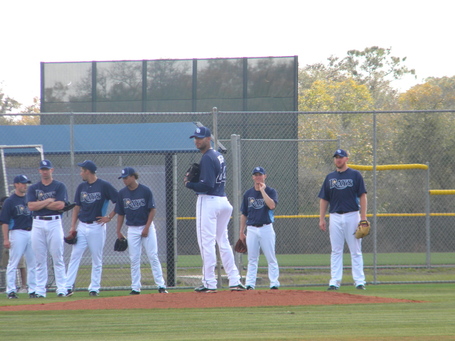 As evinced above, reliever Matt Bush uses his back pocket as produce storage. This picture was taken at about 11am and the Rays have still not let Adam Russell, far right, participate. 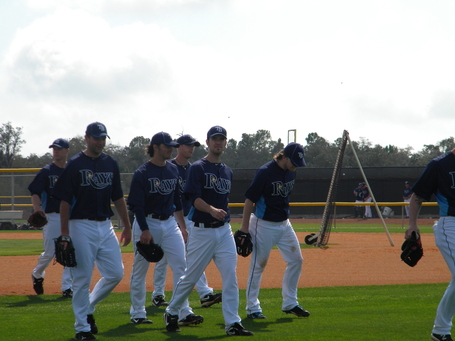 I wasn't able to identify the Ray in the center of this gaggle of migrating relievers, but I do believe that he and I had a moment. On the end of the cluster, head down, is JP Howell, looking long of hair and long on chill. The wildhair to Sonny's right is Jonah Bayliss. Despite throwing with his right hand and wearing the number 75, Suttree was not able to tell him apart from Howell. Despite him being the one who is alive, Suttree can also not tell Paul McCartney from John Lennon. Topical AND hair-based humor. 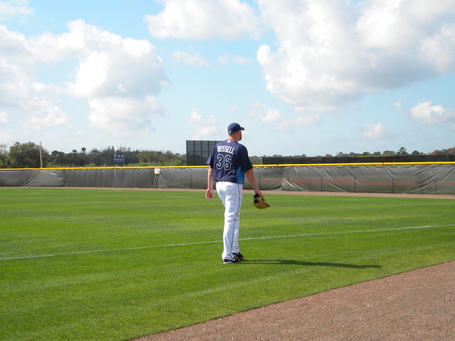 Adam Russell trudges off the field after being cut from the team. 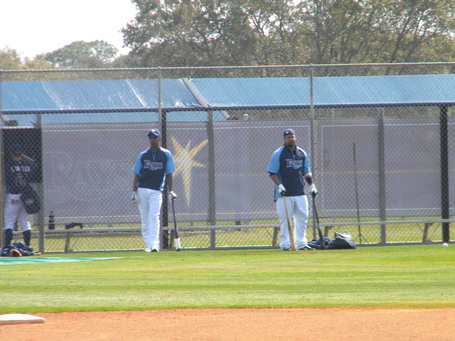 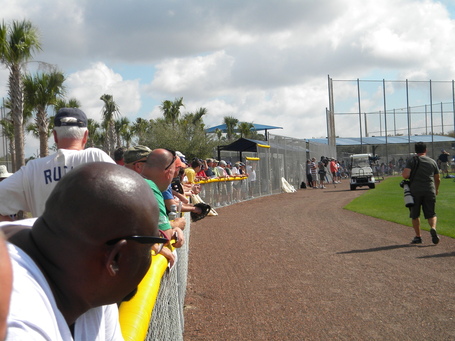 Fans crowd the fence as Johnny Damon, Manny Ramirez, and Evan Longoria prepare to take live batting practice off of Jeff Niemann. Somewhere in this photograph, I won't say where, is a man who claimed to legally represent Jose Reyes and David Wright. I would've believed him if he hadn't spent fifteen minutes getting directions to Port St. Lucie from someone on the other end of his Boost Mobile phone. 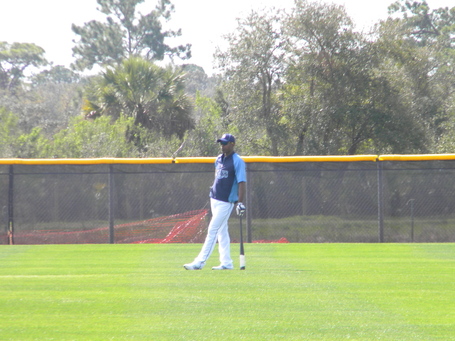 BJ Upton displays one of the new ways that Joe Maddon intends to win this season, by swatting flyballs back toward the infield. On a lighter note, the white spikes need to stay. 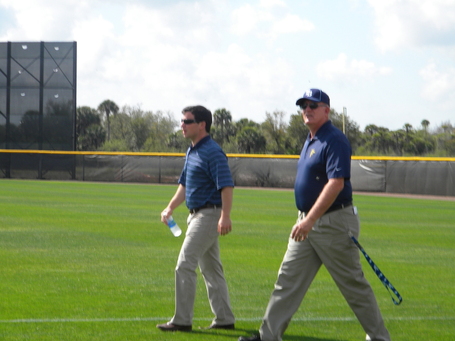 As this photo was being taken, Suttree shouted to Andrew Friedman, "Frieds, you're a fiscal prodigy!" It would be a nicer story if Friedman came over and dialogued with scrappy old Sutt about items related to his declaration. It really would be. 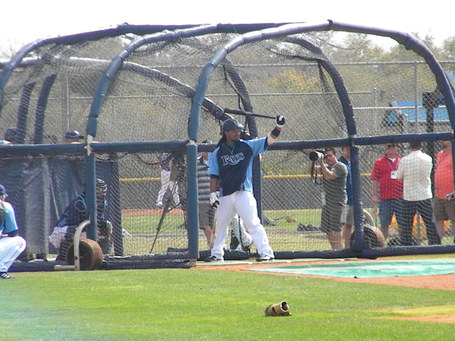 Manny Ramirez calls his shot off of Jeff Niemann. What they say about his approach and precise bat control is true, as the future HOFer slugged the next Niemann offering right into the top rear corner of the cage. 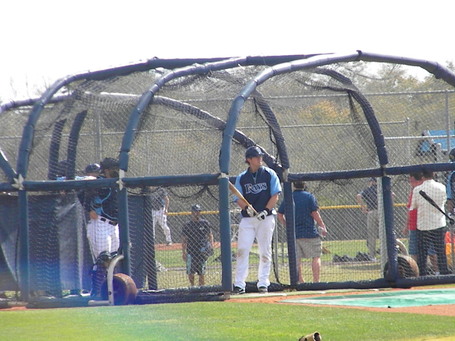 Evan Longoria was one of four Rays that we saw to take batting practice pitches up and out of the infield. The others were Ben Zobrist (liner to center), Johnny Damon (weak popper to right), and Sean Rodriguez (towering dinger). If the second day of full squad training is any indicator of the season to come, and it ostensibly is, then the Rays will not score for months at a time. On the other hand, Jonah Bayliss could win the Cy Young.

On a sincere note: the team was energetic and loose, though, as evident by the tone of this post, almost nothing could be learned from observation of them at this time. Nevertheless, it was a fun morning and awesome to be around the game in some form and watch the players interact with each other. Surprising number of Red Sox and Yankees fans were present, which is apparently a blight we can't get rid of under any circumstances.