A Q&A with Rob Neyer

Share All sharing options for: A Q&A with Rob Neyer 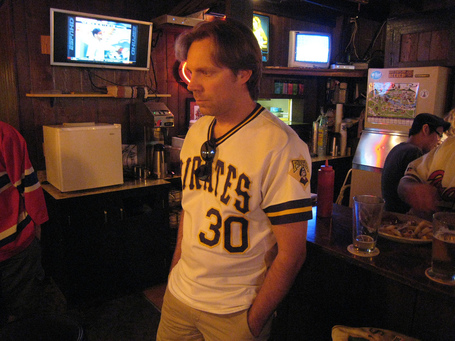 Rob, looking into the distance, wondering how the Pirates are on their way to another losing season

Which ever type of writing you fancy, be it sports or otherwise, there is usually one person who influences you and molds your interests into what they are at this very moment. For many members of the Sabermetric community Rob Neyer was that person. As you know, Rob recently left his post at ESPN.com and joined us here at SBNation as National Baseball Editor. We've done these Q&A's with Rob the past two seasons, but it feels a bit different now that he's one of us. On to the questions...

Rob Neyer: It's hard for me to imagine how things might have gone better than they have. I've been enjoying all my new toys, and of course everyone at SB Nation has been fantastic. It's just a lovely place to work.

EH: We'll open it up with a pretty general question. Where do you see the Rays finishing in the standings, and why?

RN: I see them finishing second or third. Big scoop, huh? That's really a distinction without a difference, though, because as the Yankees and Rays are currently composed, I see them both winning 88-90 games. Of course, they will be composed differently in July and August than now, which is why it's essentially impossible to know which of them will finish where.

EH: On a scale of 1-10, how would you rate the job done by Andrew Friedman this offseason?

RN: Ummm ... 7.59? Without knowing what his options and limitations were, it's very hard to say. I think we'll have to see what the bullpen looks like in June ...

EH: From the looks of it, the Rays 2011 bullpen could be full of plenty of former Kansas City Royals: J.P. Howell, Juan Cruz, Kyle Farnsworth, and Joel Peralta. As a Royals fan, any feelings on that? Should we be scared about Farnsworth, or has he made real improvements these last few years?

RN: Farnsworth's always had two problems: too many walks, too many home runs. In the last two seasons he's given up only seven home runs in 102 innings. If he can maintain something like that ratio, he's good enough to pitch important innings. Is that improvement "real," though? I suppose we'd like to assume that the Rays wouldn't have signed him if they didn't think it was.

EH: The AL East seemingly gets more and more competitive this year, and Alex Anthopolous stepped up this off-season as a real front-office force. How high would you rate each of the AL East front offices overall? How does this division compare to others in baseball?

RN: I don't like ranking front offices. There's simply too much I don't know, or understand. I think it's fairly safe to say that there's more pure intellect in the American League East than in any other division. The jury's still out, though, on Andy MacPhail and Alex Anthopoulos.

EH: The trade of Matt Garza has generally been well received. What is your opinion of the move?

RN: I thought it was a fantastic deal. The Rays simply don't have the luxury of carrying six high-quality starting pitchers. Especially not when some of them are making decent money. I guess the only thing I don't like about the deal is that none of the prospects are ready to help the big club right now, but then again that's probably why there were available.

RN: One sabermetric principle ... I don't know. Hard to choose one. Do you consider the role of luck a sabermetric principle? Because that's something that very few fans -- or writers or announcers -- grasp with any precision at all. As for old-school statistics/concepts, I don't really have any pet peeves. Sure, wins and RBI and batting average are still overrated, but that's much less true today than it was even five years ago. And I think in a holistic version of baseball, there's room for almost everything.

EH: We know Boston and New York will be ultra-competitive, but what should we expect from Toronto and Baltimore?

RN: I don't think either team's going to scare the Red Sox. I have to admit I haven't run any numbers yet to project the standings. But while the Blue Jays seem to be on the right track, I don't see them improving on last year's record. The Orioles, meanwhile, figure to benefit from a year of experience and a full season of Buck Showalter's magical powers. Still. a .500 season would be a big step for them.

EH: Who do you think gets the most at bats at first base for the Rays? Dan Johnson? Ben Zobrist? Someone else?

RN: Well, we can guess it won't be a prospect because the Rays don't have any real prospects who play first base. I'm going to guess Zobrist, if only because there are five outfielders on the roster who figure to get significant playing time. But if Zobrist plays first base, it's only four and four's a lot easier than five. But there are just so many moving parts that almost anything seems possible.

RN: Greatest signing ever if he's productive OR if management ships him out the moment he's more trouble than he's worth.

Thanks again to Rob for taking the time for us. You can find his work by clicking here.