Share All sharing options for: The Extra 2% Shoptiontest, Part 3: The Holy Trinity

The first two Shoptionest pictures centered around the beginning and middle stages of the franchise's development. The third and final installment involves the three men principally responsible for the Rays rise in prominence.

Matthew Silverman, Andrew Friedman, and Stuart Sternberg turned this franchise from laughingstock to division winner in a short time. While we respect them, heres your chance to poke a bit of fun at them as well. 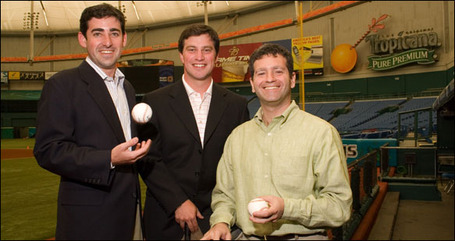 We're changing things up and throwing a curveball into the scoring this time:

Most rec'd caption: 15 Joints as well