The greatest day of the 365 we humans follow is upcoming on Friday. No, not April Fools Day. I'm talking about Opening Day. The two sweetest words in the English language.

We continue our Deep Thoughts series today with a discussion about Opening Day and exactly what it means to us, and what images it conjures in our baseball obsessed brains.

Erik: For me, Opening Day is literally almost like a national holiday. I've never missed one at the Trop, and don't plan to for as long as I can help it. Of course, I'm too young to remember any of these things, but I always think of the Reds and their Opening Day festivities. And Bob Feller being the only man to ever throw a no hitter on Opening Day in 1940. Hall of Famer Early Wynn described it perfectly in saying:

"An opener is not like any other game. There's that little extra excitement, a faster beating of the heart. You have that anxiety to get off to a good start, for yourself and for the team. You know that when you win the first one, you can't lose 'em all."

The extra excitement, faster heart rate, and anxiety can be felt by the fans as well. At least I hope.

Brad: I've actually never been to a professional sports opening day event of any kind.

Erik : WHAT?! You live in Chicago.

Brad: Only for like one'ish years. I've live most of my life in the beachy wasteland that is the Florida panhandle, where we spend most of our time asking tourists to not drunkenly pee on our lawns and absorbing hurricanes.

So for me, opening day is perhaps even more of a spectacular affair because it is enchanted with the wildness of my imagination -- what the roar of the crowd must sound like, what the smell of the peanuts and hot dogs must do to a casual fan's stomach, and what the feel of hard, plastic seats -- left sadly untouched for the last half year -- must feel like under hefty, Floridian buttocks. I ponder all these majestical things whilst watching the game from the comfort of my scalding hot laptop, in the lonely confines of my displaced fandom.

Erik: Ok, two things. First, it sounds like you need to get the fan on your laptop checked out. Secondly, we need to find you some friends in the Chicago area.

Brad: I do have friends, and they are real. They just speak Chinese and follow the White Sox. So, naturally, I just tell them to STFD all the time, and they look at me like, "什么?" and then ask, sincere and unknowing, "What sport do the Devil Rays play?"

Also, the fan may work fine on the laptop, but since I leave it running like 20 hours a day, it also doubles as my hot dog grill (helping to make the experience more authentic).

Erik: I think I can speak for the rest of the DRB community when I say, gross. But, back to Opening Day. The (Devil) Rays have actually had some interesting things happen to them on that day. Wade Boggs hit a home run in the inaugural game in 1998, in which the Devil rays got blasted by the murderer's row of Tony Clark, Damion Easily, Luis Gonzalez, and Joe Randa.

Brad: Hall of Famers. All of them.

Erik: The 2003 opener is the most famous among Rays fans, and a day I'm sure Johnny Damon remembers well. Down 4-3 in the ninth inning, Carl Crawford blasted a three run, game winning home run off the immortal Chad Fox to give Lou Pinella's boys a divisional lead. It was literally the happiest I've seen Crawford, save for his sprint in from left field after the final out of the 2008 ALCS.

Brad: I distinctly recall watching the opening day game of the magical 2008 season. I was in Hong Kong at the time, viewing the game's replay on MLB.tv from the confines of my little cubicle because it had actually occurred around 3 am local time. After their scalding hot spring and dazzling uniform makeover, the Rays fans in Hong Kong -- that being me alone -- were brimming with excitement.

And for James Shields to come out, pitch 7 strong innings whilst twirling less than 90 pitches, and for Erick Hinske to look like a rookie again and slap a dinger, it made me squeal with muffled joy, right there. In celebration, I believe I went to McDonald's to grab a red bean pie: 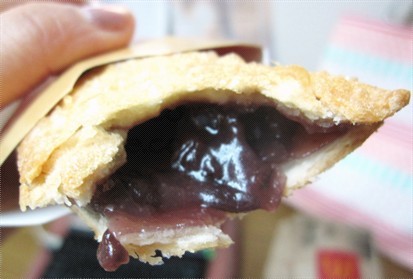 Erik: We've talked about some happy moments in Rays Opening Day history, but there's also the stretch of years in which their Opening Day starters were: Steve Trachsel, Albie Lopez, Tanyon Sturtze, Joe Kennedy (RIP), Victor Zambrano (RIP his arm), and Dewon Brazelton. To add insult to injury (literally), the 2000 home opener was started by Juan Guzman. He lasted 1.2 IP in the only action of his Rays career. That is what the kids would call "not good", unlike that pie which looks delicious. It wasn't always fun being a Rays fan, even with the excitement Opening Day brought.

Brad: Agreed. The first full season in which I followed the Tampa Bay (Devil) Rays was 2006. On that opening day in Baltimore, Scott Kazmir zinged his signature 4 IP and an uncanny Travis Lee home run proved insufficient to salvage the game.

Does anyone else miss the grittiness of this lineup? Julio Lugo the Sub-Standard, Carl Crawford the 24-Year-Old'r, Jorge Cantu (whom I love so wholeheartedly I donned a mustache much to his liking), Aubrey Huff the Soon-to-be-Traded, Jonny Gomes the Fielder, Travis Lee the Slugger, Toby Hall the Soul-Patcher, Damon Hollins the Aged, and Joey Gathright, carjumper.

Erik: I'll see your gritty lineup and one-up you. Unlike your gang which actually had some talent intermingled, the 2002 team trotted out this Mona Lisa of a lineup: Brent Abernathy the Midget, Steve Cox the future Japan Leaguer, Chris Gomez the Unheard Of, Ben Grieve--

Erik: *ahem* Ben Grieve the Hot Prospect, Toby Hall the Soul Patch Wizard, Jason Tyner the Bobblehead King, Greg Vaughn the Muscled and Overpaid, and Randy Winn the All Star. Oh, and how could I forget Bobby Smith, no nickname needed.

Brad: Truly, there has been nary a lineup more fantastically forgettable. If only we could swap ol' Randy Winn for Lou Piniella the Crazy Old Hoot, this team could have threatened to break the mystical 150-loss barrier.

So, now that we've strolled ever so casually through the War Museum of the Devil Rays Past, what are you hoping to see on this coming Friday? Which player would like to see shine early? How would like us to win -- a big blowout or a 19th inning Andy Sonnanstine save?

Erik: For excitement's sake I guess I'd like to see a walk off home run from Manny Ramirez. That would probably be the ultimate ending to his home debut. But, I already get so wound up for Opening Day that I'm not sure my heart could withstand the tension leading up. I'd love for Upton to shine early, maybe with a nice moment for Joyce sprinkled in. You?

Brad: I'm pulling for -- as I always do -- a sickening blowout; I want to the Rays to get up so early, so fast, that Dewane Staats literally vomits he feels so sorry for the Orioles. I want Dan Johnson and Manny Ramirez to hit so many home runs that prognosticators immediately begin life anew as wild-eyed recluses, sifting through trash cans muttering, "The Great Pumpkin hath risen."
I want David Price to be so dominant that Derrek Lee refuses to take his second at bat for fear of his life.

"I have a family to think about," Lee shall say in the post game. "After his eyes turned red like the fires of an orphanage, I knew there was no way I would stand in that box again."

I want the Rays to lead so much by the 7th inning, that Andrew Friedman has to trade for Josh Wilson to pitch in relief, because closing out a 57 run lead is beneath Andy Sonnanstine.

Brad: If that's a "Buffy" reference, then yes. I would like James Shields to live forever.

Erik: In lieu of trying to get this train back on the tracks, lets just end it here. Here's hoping you don't burn down your apartment grilling hot dogs on your laptop.

"It takes a big man to cry. It takes an even bigger man to laugh at that man."