The first photo in our photoshop/caption contest in honor of "The Extra 2%" week is a fantastic shot of original Devil Rays owner Vince Naimoli.

There is a lot on Namoli in "The Extra 2%", as he was the driving force behind finally getting a franchise in Tampa Bay, yet his penny-pinching ways alienated many fans and local companies. I don't want to give away too many of the good stories, but at one time he apparently refused to let a high school marching band come on the field and play unless they all paid for tickets. Oh, and he thought the internet was a fad.

Fittingly enough, Naimoli is sitting in a book store with his own business/baseball book, presumably to sign copies. As you can see by the one interested person in the background, things don't seem to be going to plan. Let's hope any book signings Jonah decides to do fair considerably better.

Give it your best shot in the comments. Remember to rec the ones you like the most. 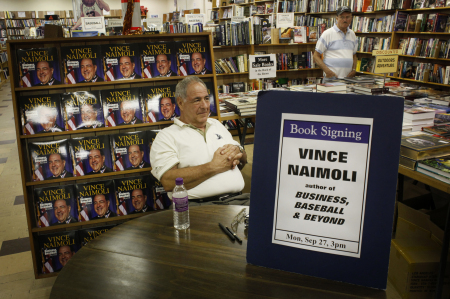