The Rays opened the 2011 regular season exactly how the ended the 2010 regular season - losing at home to the Orioles in front of a sellout crowd. The faces in the bullpen may have changed, the names in the lineup may have changed, but the immediate result was still the same: a lack of contact, a lack of timely hitting, and some self-inflicted wounds.

Last season, it was Kevin Millwood that shut them down over seven innings scattering five base runners while striking out seven in a 2-0 loss but tonight, Jeremy Guthrie looked like Roy Halladay on the mound. Guthrie went eight innings on just 94 pitches scattering just four base runners and striking out six batters. After the game, both Upton and Damon commented on Guthrie's efforts. "He threw all of his pitches for strikes. Slider, curve, 4 seam fastball, 2 seam, change...all right where he wanted them," said Upton. Damon went further, "He (Guthrie) was good. He kept getting strike one over the outside corner for strike one, and then get ahead and surprise me. He clearly did his homework." The pitch f/x data shows exactly what Damon was talking about: 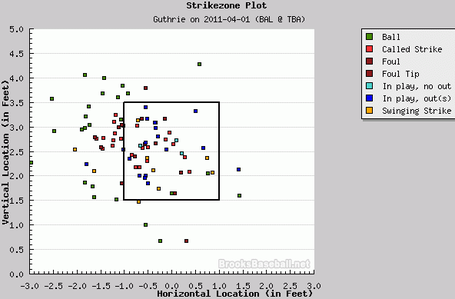 Joe Maddon made similar comments after the game. "Guthrie made great pitch after great pitch all night long. It wasn't a case of the bats being bad....Guthrie was just that good." He threw 94 pitches, 67 for strikes and the plan was definitely to stay away from the lefties and pound the righties inside and he executed the plan to near perfection as Upton and Dan Johnson were the only Rays hitters to hit anything with any kind of authority against Guthrie.

David Price was no slouch himself for six of the seven innings tonight. On the night, he struck out seven in seven innings while allowing just one walk  and five hits but it was that walk that was the spark that ignited the bad inning for Price in the fifth. J.J. Hardy is one of the better ninth place hitters the Rays will face all year, but a walk to that spot in the lineup is never a good thing as it came after a Wieters single that could have easily have been ruled an error on Reid Brignac. Brian Roberts has always been a pain in the ass to the Rays and tonight was no different as he worked a good at bat off Price to get a hanging curveball that Roberts took to deep left-center that Damon turned into a comical highlight reel diving after the ball and then making an attempt to flip it to Upton (who had called for the ball). That fifth inning is where the Rays ended up losing the game, not in the 8th when they ran their way out of a potential scoring situation.

Upton led off the 8th with a deep double to center and after a lineout by Joyce, was joined on base by Brignac who earned the only walk on the night. With Jaso up at the plate, Upton got caught leaning as he thought about stealing third, a situation he owned up to in the clubhouse admitting that he probably should not have gone in that situation. The umpires ruled that Upton had gone outside the baselines which is why they did not call obstruction on J.J. Hardy who thought he had committed a bone-headed move when he ran up the back of Upton just before Mark Reynolds applied the tag. The move was an unnecessary risk as Upton would have scored from second on anything out of the infield with his speed so unless it was on the front end of a double-steal, the move has to be considered as Upton's first frustrating base-running maneuver of the season.

Only a 9th inning home run by Zobrist let the Rays avoid a home shutout. It was nice to see Zobrist get that first home run out of the way since it took him until May 20th last season to hit his first one.

When a pitcher is on top of his game as Guthrie was tonight, the Rays have to minimize their mistakes tonight, which they failed to do. The Rays failed to get people on base tonight and when they did, they squandered them getting GTMI2011 is off to an 0-4 start.