For the next three games our generals will run by the names Jeremy Hellickson, David Price, and James Shields. Each has a weakness that they must not allow to be exploited while simultaneously attacking the weakest parts of the Legion of Red Sox. These intimidating foes bring many to the battle, but under their pink flag lies those that are not warriors. Their army was once built upon underdog status that hardened the resolve of the combatants. Now they have grown fat on the land as soft winters and sunny summers have eroded their once pitiable facades and left only grime and sludge in the ensuing deluge of anything resembling character.

Our generals will have to match wits with some of the best batsmen on the planet with names like Gonzalez the Nightelf, Crawford the Redguard, Youkilis the Ogre, Ortiz the Hutt, and Pedroia the Dwarf. Much like our generals and the dragons of lore, they do have a weakness if one knows how to attack.  So grab your Mithril for +2 defense and get ready to see which weapons are best to use against each beast.

Let's start with an overall look at how each of these terrible monsters fares based on the arm that the opposition hurls with:

The above tables show three years worth of pitches for each of these players with the raw number in the Total column. B stands for Ball%, CS for Called Strike%, F for Foul%, IP for In Play%, and SS for Swing Strike%. Usage will come into play once we start looking at the individual pitches. Swing% surprisingly (it's not surprising) looks at the likelihood of a batter to swing while Contact% shows the likelihood of putting a ball In Play per swing. BIP stands for Balls In Play and is used with linear weights to come up with wOBAcon. None of this should be new, but you can review some of this further in my previous piece in this series looking at the B-More Orioles. I don't want to take too much time staring at this data as the idea is to use this as a sort of cheat sheet throughout the game. Also, each of those colors are scaled, such that, the greater numbers are green while the lesser numbers are red. The only departure from this is the CS and SS columns which are flipped. You could make an argument that other columns should go this way as well, but it's less important than realizing which players are on the extremes.

Say Drew the Elder steps to the plate late in a game. Would it be a good idea to bring in a lefty to face him?  Well it might be a good move in this vacuum of one plate appearance as he makes less contact for less bases against lefties, while whiffing more and putting less balls in play. I remember a certain important game where David Price was brought in to face Drew and he never stood a chance, easily going down. How about a new face in the division like Jarrod Saltalamalikalikimaka?  Well he's pretty dreadful against lefties whiffing on 15% of all pitches and swinging at 53% of them overall.  s pitiful as he looks against lefties, he actually brings a little sumpin sumpin to the plate against righties as he puts aside the hacking a bit and generates a little more power.

That same thing could be said for the entirety of the lineup as you can see in the bottom-line totals. In roughly half the number of pitches they've shown that they take less balls, put less balls in play, and whiff more than against right-handed pitchers. Also, they swing more while making quite a bit less contact and this all translates to a .034 difference in wOBAcon when they do manage to put a ball in play. That's a vast chasm of difference and makes me up that Cesar Ramos and Jake McGee have their stuff together for this three-game series. Obviously, the same can be said of Price.

Let's take a look at how these degenerates perform against lefties by pitch type. Unlike the previous entry to this series I have lumped all fastballs (four-seamer, two-seamer, sinker, cutter, splitter) together as yes they have different properties, but they're more like each other than each of the off-speed pitches -- Change (CH), Curve (CU), Slider (SL). My hope here is to keep the sample sizes as large as possible and to not get so granular that the data loses all meaning or becomes to convoluted for the reader to easily follow. Also, I will take a moment to mention the normal caveats of Pitch F/x data apply here. Pitches get mislabeled, cameras aren't always calibrated, and sometimes the data suffers for this. If we had a million pitches, I wouldn't really worry about this, but we do have over 50,000 here, overall, so bear in mind that mistakes happen, but hopefully they are pretty well diluted. Lastly, there are still small samples involved here which is why I've included the total pitches and balls in play columns. Use your best judgement in all things. 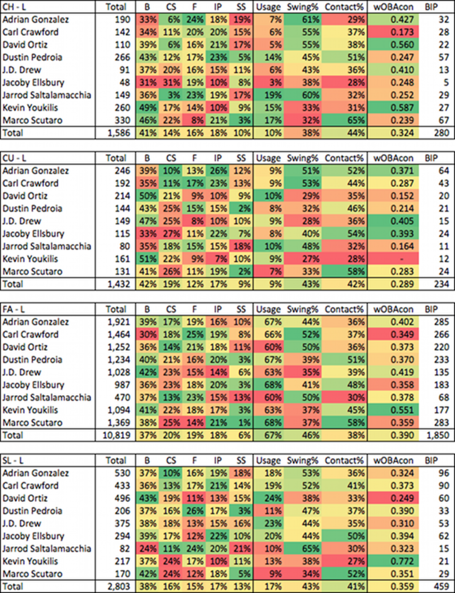 Again, this is meant as a reference, so I won't bore you with the details as you should have a solid grasp on how to handle these now. I will point out a couple of interesting things, however. Adrian Gonzalez will really chase the same-handed change, but can do some damage once he lays into it. Dustin Pedroia sees a ton of change ups and fares pretty poorly against it generating a lot of weak contact. Salty is also a sucker for the change as he sees it a lot, swings at it a lot, and doesn't do much with it. Youkilis sees his fair share of changes, but rarely swings, especially out of the zone, but when he does get a hold of one he can do some real damage.

Moving on to the curveball, we can see that All Natural David Ortiz and Salty both see the most from lefties around 10%, and neither does a whole heck of a lot as they don't swing much and when they do manage to make contact it's pretty weak. Youk pretty much will not swing at a curveball from lefties, so it could be a good way for Price to get ahead against a tough batter. Both Craw and Gonzo will swing more than half the time and take their fair share of whiffs, while not providing much power.

Unsurprisingly, the fastball is where the Red Sox do most of their damage against lefties.  What does shock me a little bit is that the heater is also the pitch that they are most likely to take for a strike and least likely to take for a ball. They do foul it off a ton, especially Craw, Ortiz, and Salty, with none of those players having an above-average wOBAcon. The guy that you have to look out for is Youkilis as he can do disgusting things to a fastball from lefties. He swings at about 37% of them which tells me that he's most likely key-holing on the fastball. If he gets the one he wants he's going to punish it, but Price, McGee, and Ramos need to be very careful to keep it on the edges of the zone.

Generally lefties are going to struggle mightily with the left-handed slider and righties should jump all over it. This bears out with Drew, Gonzo, Ortiz, and Crawford to an extent as all of them have high swing strike rates and all but Crawford fail to provide much power on the pitch. Ortiz gets the slider roughly a quarter of the time and is woeful against it, particularly. The general theory seems to hold up as Youkilis crushes this pitch and Pedo is also pretty solid against it, though he fouls off a ton of them. Let's move on to how these guys handle righties: 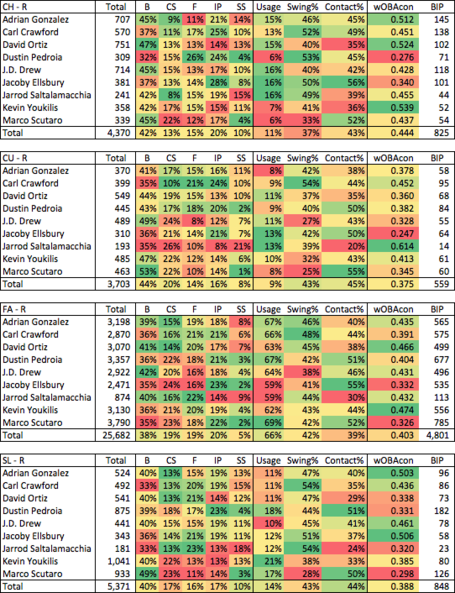 Righties throwing change ups to lefties seems like a good idea, but both Ortiz and Gonzo can do some damage if they can manage to get wood on it. Both have high whiff rates and don't make a ton of contact, however, so James Shields change could be a lot of fun to watch in his start. The righties (Pedo, Youk, Scut) don't see it much, but run the gambit of results.

Jacoby Ellsbury really struggles with this curveball as he sees it more than his peers and can do next to nothing on it. Jarrod Saltalamacchia sees it the same amount, relatively, but has much more of a feast or famine approach as he's either crushing it or not touching it. J.D. Drew is another guy that sees it quite a bit, but almost never swings and doesn't do much damage when he does.

For some reason Ellsbury and Salty see the least amount of fastballs on the team, but Ellsbury, especially does practically nothing with it. He's going to put it in play quite a bit, and I suppose you can fear his wheels, but I think I'd be content to take a 1-2 pitch at bat that results in some slappy ground ball or weakly hit line drive. Youk and Ortiz do the most damage on the right-hander's fastball and Craw and Gonzo should also be pitched carefully even though they will both whiff more than your normal Red Sox batter.

The slider is where righties feel that they can attack Youkilis as he sees it 21% of the time and only had a modest .385 wOBAcon over these last three years. He tries to lay off it, but even when he swings he only makes contact a 1/3 of the time. The rub is that Hellickson and Shields don't really throw a slider, but it could come into play late in a game as the bullpen takes over. Pedroia is also pretty week against it as he sees the slider second most and doesn't do much when he puts it in play. You really don't want to throw this pitch to Adrian Gonzalez as he can really do some damage when he's not swinging through it.

This is a really good lineup despite what their record is to date. It surprises me how similar Crawford and Gonzalez are as they're both a bit hacky, but Gonzo relies more on his power while Craw gets by with his horsepower. Marco Scutaro takes a ton of pitches, but generally isn't a threat, and guys like Pedroia and Drew are pesky batters that don't have too many holes in their swing. If we can manage to keep Youkilis and Ortiz in the yard, then I think the Rays will have a chance to bury these animals in the bottom of the division.