For whatever reason, Jeremy Hellickson has been the most interesting pitcher to me in the Rays organization for the past two or so years. I was thrilled when he was given a shot last year with the big league club, and even more ecstatic when he came out and quickly proved his composure, control, and change-up were worthwhile of staying in 'The Show'. Much to my dismay, I've had to miss his first two starts of the 2011 season: the Angels start due to work, and I chose to see Durham play instead of his Red Sox start since the Bulls were in town.  Feeling a little deprived after watching three Price starts and a few Niemann gems, I decided to take a further examination into Hellboy's first couple of outings. While the two lines look pretty similar in the base metrics, there are quite a few interesting differences.

Looking beyond hits and runs, it is a stark contrast to see his 5/1 K/BB ratio invert to a 1/5 ratio. Even his GB/FB ratios took reasonably sized flips:

Glancing through box scores is always fun, but the real interesting stuff comes from a dive into Pitch F/X.  Some pretty charts to follow, but first here is a collection of my thoughts after going through Brooks Baseball, TexasLeaguers and Fangraphs:

Hellickson's pitch speeds decreased steadily throughout the game, with his fastest pitch in both games coming in the 1st inning (I understand this is the beginning of the season, but Price's fastest pitch was around #85 Tuesday night with an upward trend, Davis has held pretty constant too... Shields and Niemann not as much).

I saw some tweets on this topic, but boy, does it seem like the ump was stingy in the Red Sox game. I counted 18 pitches inside the zone that were called balls.

Pitch FX doesn't seem to know what to call Helly's fastball, as it teeters between 4-seamers and 2-seamer in each game. The spin and speed clusters aren't distinct as they are with some pitchers, so I'm leaning towards thinking they are mostly 4-seamers.

Now let's take a look at his pitch selection and what the results have been, focusing on swinging strikes.

Not that this is news to anyone, but Hellickson's offspeed pitches have an amazing ability to generate whiffs.  What I didn't realize was the mediocre results of his fastball (note - pay no attention to the 5 cutters, 4 should be FF, and 1 a curve.. and as mentioned before, I don't see a lot of difference in the FF & FT as well, hopefully they get re-characterized).  In the Angels game where he threw 26 curves, not only did he get 10 SS, 5 were called strikes, 3 fouls, 2 were hit into outs and only 6 were balls!  My quick guess as to why the usage difference in the two games would be the Angels put out a more RH heavy lineup compared to the LH that he Sox threw out.  So it would seem that if a team tries to Danks Theory Hellickson, they will just get a massive dose of the curve.

The last note I wanted to bring up is in regards to his control.  For those that aren't aware, Fangraphs now has a Pitch FX tool on the player pages, and have "heat maps" to display the frequency of a location that a pitcher hit (including by pitch type and handedness if you want).  Take a look at how well Hellickson locates his change-up on the lower outer corner to hitters.  Then a comparison to Shields (whose graph looks the same whether LH or RH). 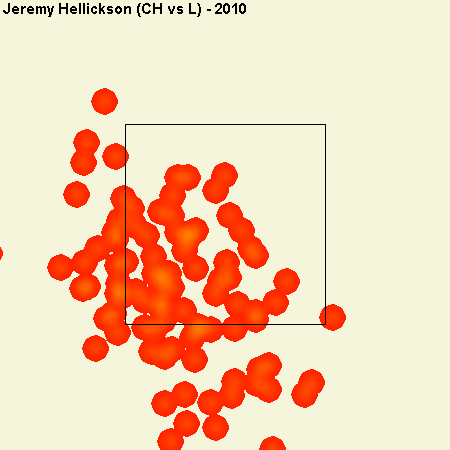 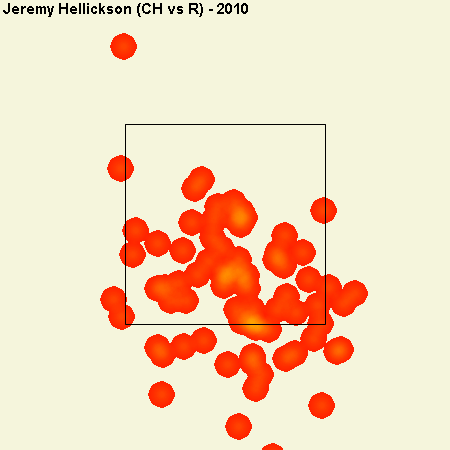 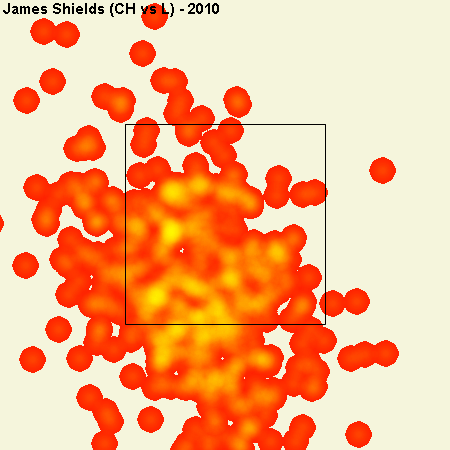 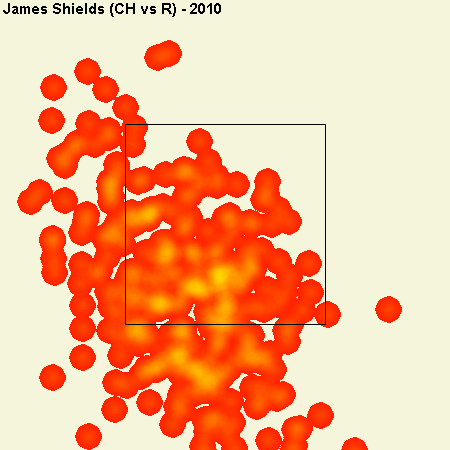 Unfortunately, it looks like I'm going to miss Hellickson's next two starts as well since I'll be on a cruise with the family next week (#humblebrag I suppose).  Hopefully we can get the result of the Boston game with the peripherals more like the Anaheim game.