Do the Rays Need Power?

Share All sharing options for: Do the Rays Need Power?

Last season, most did not notice that the Rays finished with 12 more stolen base than they did home runs. The team combined for 172 stolen bases while hitting 160 home runs joining the Mets, Mariner,  and the Athletics as the only teams to do so in baseball. The obvious difference between those four teams is that one made the playoffs while the other three did not.  The club lost 66 of the 160 home runs from last season via free agency, trade, or retirement while brining in just 16 home runs for last season meaning there is a very good chance the club repeats last year's feat. The big question - can they repeat last year's result?

It is relatively accepted that power is not as prevalent these days as it was just ten year ago for whatever reason you want to believe whether it was PEDs or expansion teams finally acquiring decent pitching talent. Simply put, 30 home run hitters today are the exception these days when they were once the norm. As power has waned, speed is making a comeback and the chart below shows how both statistics have trended since just before the last players' strike. 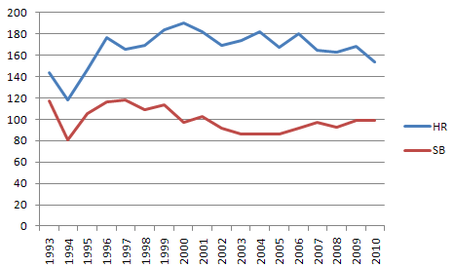 The stats were quite divergent for a few seasons but are creeping a bit closer together these days yet still far from the closeness the two categories shared back in the early 90's. In 1993, the first year on this chart, nine different teams had stolen base totals greater than their home run totals yet that phenomenon only repeated itself 39 more times in the remaining 17 seasons.

This kind of trend is not a solid indicator of success as the results are quite mixed. The 1998 Marlins had 115 stolen bases and 114 home runs as a team, and went 54-108 while the 2001 Mariners stole 174 bases and hit 169 home runs and went 116-46 under the tutelage of Lou Pinella. However, we can look at the questions everyone has been asking lately: Can a team with (insert condition) make the playoffs? Of course they can.

Looking back over the past 18 seasons, I found 48 instances of a team whose stolen base totals exceeded their home run totals in a give season. The Astros, Marlins, and Royals all tied for the most appearances with four each while only the Astros did it in consecutive seasons.

What is the largest differential any team has had that has made the post-season?

The record for the largest difference in any season belongs to Jonah Keri's Expos who won 94 games while hitting 122 home runs and stealing 228 bases. That club had eight different players steal ten or more bases led by Marquis Grissom who swiped 53 bases. Unfortunately for the Expos, there was no wildcard at this time and the Phillies won 97 games that season and won the division. The next season, the Expos were even better but the strike hit, and Le rest est l'histiore.

In 1997, the Astros made the post-season with an 84-78 record as they stole 171 bases while hitting just 133 home runs as they played in the cavernous Astrodome. In fact, none of the nine teams between the Expos and that Astros club finished with more than 82 wins which shows just how special that Expos team was.

Can a team that has more steals than homers make the post-season?

Can a team that has more steals than homers even finish .500?

The nine teams mentioned in the previous paragraph obviously accomplished this feat but they had more company including the aforementioned Expos, the 1993 Cardinals (87 wins), the 1996 Astros (82 wins), the 2007 Dodgers (82 wins), and last year's Athletics (81 wins). Those two groups represent 29% of the teams in this mini-study.

It seems as though pundits and fans have spent the first two to three weeks trying to rationalize the performance of the Rays looking for the last team to make the post-season with an 0-4, 0-5, or 0-6 start but it certainly seems like the hot play of late has quieted that down to the point now people are looking at who can make the post-season after starting off the season with a sub .500 record. That story will come out later this week, but if anyone tries to tell you a team that runs more than they hit cannot make the post-season, now you are armed with the data that proves otherwise.