Hai, Guyz remember that funny thing the internet did?  Me neither.  Instead, I wanted to take a quick look at the End of Days, also known as, the first nine games of the season, and the following nine games, in which, the Rays were on pace to win 144 games over a full season.  As is the case with just about anything in life, the extremes of both the good and the bad were both artificial as reality is much more central than these win/loss jihadists would have you believe.

Let's take a look at runs scored and allowed smoothed over three game averages to remove some of the fluke effects of individual games: 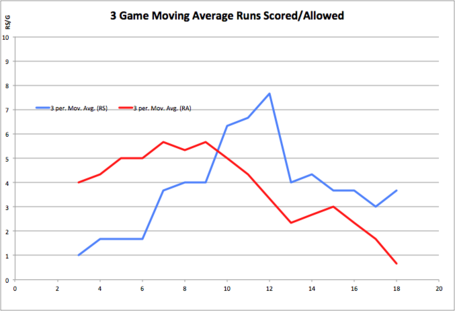 It sure looks like the pitching, overall, has really locked it down, and thank the Beejus for that, as the offense has been sitting between three and four runs for a good chunk of the year.  We can also look at some of our favorite statistics over these nine game spans to see the affect of small sample size:

Nearly across the board we can see just how bad things were going at first and how crazy good they've been over the last batch.  Triple slash, summary, power, and luck numbers all show a bipolar Janus that is either shooting deer in the face or falling out of the tree strand drunk as a skunk.  The discipline numbers of K% and BB% are a little more interesting to me.  The Rays struck out a whole lot less during their good spell, but were also walking less as a team.  This would lead me to believe that they were swinging more and working the count less.  It will be interesting to monitor this going forward as pitchers may seek to take advantage of their new found aggressiveness.  How about the dealers:

The pitchers show a similar story with the triple slash, summary, luck and power numbers.  Strikeouts were essentially the same, while walks were up a touch, but while the Rays started off a tad unlucky in their ERA vs. FIP spread they have been just as lucky in the second half of these games.  I wouldn't expect the Rays to continue to win greater than 80% of their games, as they aren't quite the greatest team to ever lace them up, but this most recent streak was a ton of fun to watch and incredibly necessary to get fan interest back on the team.  If they can manage to pitch around a 4.00 FIP over the next couple of weeks and can keep their wOBA over .330 then I think they can manage to stick around .500.

Fans of our rivals like to talk about how their teams are always in a position to better themselves over the course of the season, but I don't see the Red Sox or Yankees adding players of the calibre of Evan Longoria, J. P. Howell, and Desmond Jennings over the next couple of months, while shedding deadweight like Casey Kotchman.  I have a lot of faith in the Rays to parlay that .500 first two months into a very competitive middle two months with an outstanding pennant run.  Check back in about a month when we'll take another look at this to see what's smoke and mirrors and what's just an awful baseball player.  XD Internet Jokes XD