Joe Maddon: The Underrated Leader of the Rays

Share All sharing options for: Joe Maddon: The Underrated Leader of the Rays

A manager is often given too much credit for a victory and too much blame for a loss. Many times a manager will make the best statistical move but if the results are negative the fans will blame the manager for the move. Fans may have grown up with a certain belief on how the game should be played and will not budge even in the face of overwhelming evidence that the old notion they are latching onto is incorrect. Baseball strategy has evolved over the years as the game has changed and more statistics are involved. These statistics are used by GMs when designing a roster and by managers who are looking to gain any advantage over a particular pitcher or opposing team.

Two of the most heated debates about strategy are lineup construction and when to use the closer. There are two great chapters in Baseball Prospectus' book Baseball Between the Numbers: Why Everything You Know About the Game is Wrong. The first article covers the lineup construction and is titled Was Billy Martin Crazy? written by James Click. The second article covers the debate about closers and is titled Are Teams Letting Their Closers Go To Waste? written by Keith Woolner. A book recommendation to anyone interested in the art of baseball strategy is Weaver on Strategy written by Terry Pluto with Earl Weaver.

A manager also has to be able to handle the many different personalities in a locker room, keep his players fresh and ready to play at any moment, and guide his team through the inevitable ups and downs of a 162 game season. The combination of statistical acumen and the ability to fairly assess the energy/mood of his players is where I believe Joe Maddon shines. If winning two AL East Division titles over the past three years with markedly different rosters wasn't convincing enough, the 2011 season is shaping up to be proof positive of the managing ability of Joe Maddon.

Managing a team in the AL East is always going to be a tough challenge. Managing a team with a roster that has had one of the most significant turnover of any playoff team in recent memory makes it doubly hard. But after losing 8 of your first 9 games, losing an MVP candidate in Evan Longoria after just two games to an oblique strain, and losing your expected cleanup hitter to retirement after a failed drug test could of been reason enough for a team to have a collective April collapse. The Rays did not collapse, they have rebounded to win 13 of their last 16 games and trail the New York Yankees by 2 games in the AL East as they come home to face the LA Angels on Friday evening. The Rays are scheduled to get Evan Longoria back on Tuesday and JP Howell a few weeks after that. Is there any reason to believe that when Joe Maddons' Rays return to full strength this team cannot win the AL East in 2011?

The are few ways to judge how a manager handles the emotional side of the game since we aren't privy to what actually goes on in the locker room. One thing we do have is statistics to compare managers in different areas of the game. After the jump, I will present some of the manager metrics presented in The Bill James Handbook.

The Bill James Handbook comes out following each season dedicates an entire section of the book detailing the performance of managers. James admits that the metrics used to evaluate a manager are not static and they change over time. He cites the one-time ability to differentiate a manager by whether they used a four of five man rotation, whether they platoon, or whether they used their closers for more than one inning. In Bill James own words, "to measure the difference between managers, then requires constant innovation and constant questioning. We have to keep asking ourselves what it is, in our game, today, that distinguishes managers."

The statistics are broken up in a way that examines lineup utilization, substitution, starting pitching usage, relief pitching usage, tactics, and intentional walk strategy. When approaching each statistic keep in mind that the failure to do x or y isn't indicative of good or bad managing. There are many moving parts involved in each number and they are provided to more or less define the type of manager of a team for a particular season. In The Bill James Handbook managers career statistics are given and patterns do emerge over multiple roster with different styles of play.

So, as then 2011 season progresses and arguments break out on blogs, forums, and around the water cooler, let's take a moment to examine some of the metrics that could be used to judge or define a managers style. Finally, let's take a look at how the Bill James metrics are defined and how Joe Maddon and the Rays fared relative to other AL managers over the 2010 season.

Lineups Used (LUp): defined as the number of lineups used. Maddon used the fourth most lineups in the AL (tied with Jim Leyland of the Detroit Tigers) with 129 with the league average being 124. Terry Francona of the Boston Red Sox used the most lineups with 143 while Cito Gaston of the Toronto Blue Jays used the least lineups with 103.

Platoon Percentage (Pl%): defined as the number of players in the starting lineup that have the platoon advantage. Maddons' lineups had a Pl% of 67% with the league average being 60%. Joe Girardi of the New York Yankees led the league at 72% while Cito Gaston of the Toronto Blue Jays had the lowest at 42%.

Pinch Hitters Used (PH): Maddon used a league leading 174 pinch hitters in 2010 with the league average being 87 while Cito Gaston of the Blue Jays used the fewest at 40.

Pinch Runners (PR): Maddon used 31 PR in 2010 with the league average being 37. Ron Gardenhire of the Minnesota Twins used the most PR with 55 while Jim Leyland of the Detroit Tigers used the fewest at 11.

Defensive Substitutes (DS): Maddon used 18 DS in 2010 with the league average being 24. Jim Leyland of the Detroit Tigers used the most DS with 47 and Cito Gaston of the Toronto Blue Jays used the fewest at 13.

Quick Hook: Maddon had a Quick hook 41 times with the league average being 43. Bob Geren of the Oakland A's and Ron Gardenhire of the Minnesota Twins led the AL with 57 and Terry Francona of the Boston Red Sox had the fewest at 32.

Slow Hook: Maddon had a Slow Hook 34 times with the league average being 43. Terry Francona of the Boston Red Sox had the most Slow Hook games with 63 while Ron Gardenhire of the Minnesota Twins had the fewest with 28.

Long Outing (LO): A LO is defined as a game where the starting pitcher throws 110 or more pitches. Maddon's Rays had 26 LO with the league average being 27. Terry Francona's Boston Red Sox had the most LO with 49 while Ron Gardenhire's Minnesota Twins had the fewest with 5.

Relievers Consecutive Days (RCD): Maddon used relievers on consecutive days a league leading 135 times with the league average being 84 while Ozzie Guillen of the Chicago White Sox had the fewest with 61 RCD.

Long Saves (LS): Saves more than one inning: Maddon's Rays had 2 LS with the league average being 4. Ozzie Guillens' White Sox led the league with 8 LS and Mike Scioscias' Anaheim Angels had the fewest with 0 LS.

Relievers Used (REL): Maddons' Rays led the league with 470 REL. The league average is 438 while Ozzie Guillen of the Chicago White Sox used the fewest at 417.

Runners Moving with the Pitch (RM): Maddon had the Rays RM 166 times with the league average being 154. Mike Sciocsia's Anaheim Angels led the league in RM with 223 while Cito Gaston's Toronto Blue Jays finished last with 88.

Pitchouts (PO): Maddon called for 12 PO with the league average being 19. Jim Leyland of the Detroit Tigers led the league with 31 PO while Bob Geren of the Oakland A's called the fewest with 11.

Intentional Walks will be discussed in terms of frequency, good results, no good results, and bombs. The following table gives the raw data on each outcome and the percent success/failure rate. 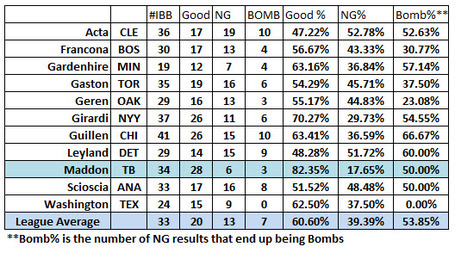 Intentional Walks (IBB): Maddon ordered 34 IBB with the league average being 33. Ozzie Guillen of the Chicago White Sox called for the most IBB's at 41 while Ron Gardenhire of the Minnesota Twins called the fewest IBB's at 19.