A Rebuttal to the Berthiuame Article

Share All sharing options for: A Rebuttal to the Berthiuame Article

For those that haven't read it yet, Steve Berthiaume of ESPN wrote a decent enough article about Ben Zobrist this morning saying that he feasts on fastballs. Ok, cool enough. I think most around here know that Zobrist has much more success against straight fastballs than stuff that has a wrinkle in it. I took a bit of umbrage when Mr. B put on his analyst hat and attempted to coax some information out of Zobrist's games yesterday:

Before Thursday, Zobrist had seen 77 changeups this season and put only six in play, for one base hit. Tampa Bay hitting coach Derek Shelton has been working with Zobrist on his adjustments to changeups. Despite his record of struggling with the pitch, Zobrist saw only six changeups in Thursday's first game and did not put a single one in play. He did, however, crush just about everything else.

I've got him seeing five change ups from righties in the first game and another three from lefties. Game 2 saw him get another 2 from righties and only 1 from a lefty. My issue isn't to quibble with pitch classification outcomes, but to point to how absurd it is to say that Ben didn't even put a single one in play.

Perhaps it's just laziness on the part of the Worldwide Leader, but I would think they would have at least compared to the data. I'm using Joe Lefkowitz's Pitch F.x database for all this and you can download my workbook here:  Zobrist v. Twins. First let's get an idea of whether or not the database has correctly identified these pitches: 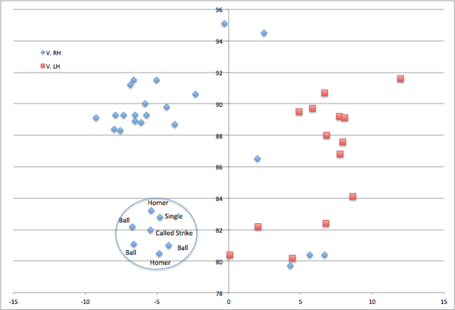 The horizontal axis here shows how much the ball moved in (to the left for righties) or away (to the left for lefties).  Generally a fastball (upper left for righties) is going to show similar inward movement as a change up. You can see this is pretty much ideal with the change ups being slower and showing similar movement from righties. I'm not going to touch on the left-handed changes as they're not clustered as nicely and it doesn't need to be done to make the point. Mr. Berthiaume stated that Zobrist didn't put even a change up in play in game one, but this clearly isn't the case as he very clearly clobbered a dinger off a change up from Jim Hoey in the first game. If you're curious, it's the faster homer in that cluster at 83.2 MPH from a guy that sits in the mid-90's.

Now let's take a look at where these pitches were in the strike zone: 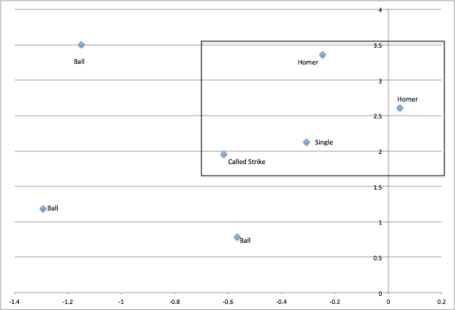 The three balls are fairly obviously out of the regulation strike zone and that called strike sure looks like a pitcher's pitch being low-and-away to the left-handed hitting Zobrist. The two homers are about as meatbally as it gets as most pitchers want to keep their change low, not up and over the middle or middle-middle. The single was a little bit lower which probably explains the groundball that got through.

I don't know enough about Mr. Berthiaume to know if this was just him being sloppy or if he generally just shoots from the hip without doing the research, but I have to say that I will be taking his thoughts and ideas with a bit of a grain of salt from now on.

Lastly, I have Zobie seeing 76 change ups (close enough to what Steve had) coming into the double-header with only five being put in play -- for a run-scoring triple, three groundouts, and a popout.  He's only swinging at about 37% of all change ups coming into these games. When he took a pitch, it was a ball roughly 65% of the time and a called strike the other 35%. When he did swing, he wasn't showing a whole lot of great results as he fouled off 32% of his swings and whiffed on a full 50%. Meanwhile, he had put a paltry 18% of his swings into play to that point. I'm sure Zobrist is having enough trouble with the change that we need to erase his good moments as well.