Share All sharing options for: Tale of the Tape: Rays-O's First Series

So that wasn't much fun against the Orioles and we didn't even see Matusz.  Clearly they are going to win 130 games this year and you have to wonder if the Rays can even win 30.  Seriously though, this is a quick piece I would like to do as a wrap up for each series.  As Mr. Maddon would say, let's spend 30 minutes enjoying the victory and the same mourning the loss.  As this is an introductory series, please don't hesitate to leave feedback.  Let me know any other stats you would like to see being the chief ore that I'm trying to mine here. 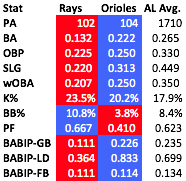 The AL Avg. represents the entire American League up to Monday, April 4th.  Clearly the Rays were outhit in the series, but it's more about how woeful the Rays were than how well the O's hit.  You can see that our pitching neutered their bats for the most part as best shown by the wOBA that was .100 points less than the AL Avg.  Of course the Rays were even worse as shown by their .207 wOBA and lousy Strikeout%.  The walks and the power are what we really like to see and those were the only categories that outstripped the Orioles.  Recall that PF stands for Power Factor which is just ISO/Batting Average.

What I will remember about this series is the cerebral matchup of Buckneto against Professor Maddon. 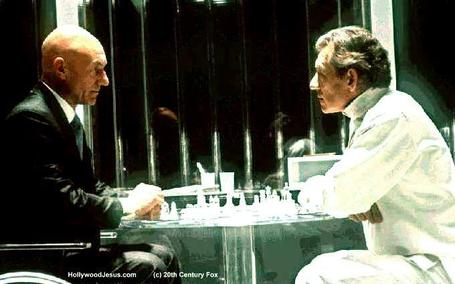 Jean "No" Luc Picard and Sir Ian Dussander play the roles of Professor Maddon and Buckneto in the upcoming straight to Beta release "Buckneto Knows Where to Catch Balls"  via images2.fanpop.com

Every time a Rays batter got good wood on a ball, it seemed that an Orioles fielder was perfectly aligned.  Granted, the Nick Markakis catch was an outstanding example of athleticism, but the Rays hit 12 line drives over the three games with only five falling in (Zoby's dong does not factor into balls in play).  The thing about timely hitting is that it needs to be both timely, and a hit.  Who's to say what could have happened if a few of these ropes turned into extra base hits.

It's pretty easy to fall into some sort of doom spiral after three games.  I'm sure plenty of Boston fans have already asphyxiated (auto erotically, or otherwise) after starting off getting swept.  People can poo poo the Orioles all they want, but if the young arms hold up they look a lot like a certain 2008 AL pennant winner between the young talent and a couple of supposed washed-up vets.  My big takeaway is that we're taking our walks and hitting for power and at some point those liners will start falling in and the grounders will start getting through.  Can't wait to hear a certain someone think I'm spinning this, but our pitching held a good lineup down and our supposed biggest question mark played remarkably well outside of the Jake McGee tater salad.  Now let's get the bats going as well.