The Outside Corner: Who Benefited?

Share All sharing options for: The Outside Corner: Who Benefited?

Most people don't like hearing poker bad beat stories. That's understandable. "Oh man, you had kings and the other guy had aces? Unbelievable!" I don't mind as much so long as the player complaining about their bad fortune also acknowledges their good luck when they find themselves on the other side. So consider this my first bad beat story of the season, and you have permission to smack me if I ignore Lady Luck's contributions when the Rays hold the aces.

One thing I noticed this weekend was that the Orioles pitchers were pounding the outside corner against left-handed hitters. Yes, their pitching was quite good, and yes, the Rays' offense was quite bad, but being the homer I am I couldn't help but feel that the umpires were exacerbating the situation. It was especially weird in the opener, when Guthrie was getting the call and Price wasn't. Here's the chart from BrooksBaseball.net's pitch f/x tool. It may not be perfect, but it gives us a good idea: 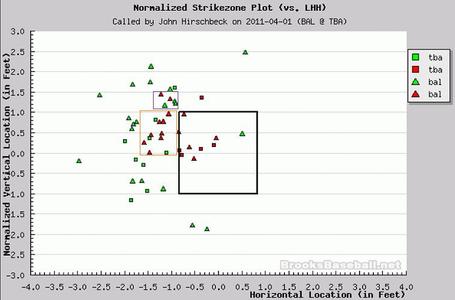 First things first: Going batter by batter on Brooks, I couldn't figure out where the two Baltimore strikes in the purple-outlined area came from, so I didn't factor those in. Rather, I'm focusing on the orange-outlined area, or what I'll be calling the Hirschbeck Zone. That Guthrie threw more pitches near this corner isn't a surprise -- he faced six lefties, Price faced only two -- but what jumps out immediately is the fact all eight of Guthrie's "called" pitches (balls or called strikes) in the Hirschbeck Zone were called strikes, while all three of Price's were called balls.

As I said, this was especially weird, and not just because of the drastic difference. Price works from the third-base side of the rubber, but the ball is coming the from the left side, and in order to get to the outside corner against a left-handed batter has to "cross over" and could give the illusion of going over the plate. Guthrie works more toward the first-base side of the rubber, but as a right-hander, the ball doesn't need to "cross over" to get to the corner in question. Intuitively, you'd think the left-hander would actually get more called strikes.

With lefties at bat, Hirschbeck stands over the inside corner (over the catcher's right shoulder), so my best guess is that he didn't have a great view of what was or wasn't going over the outside corner, and something about the angles the pitches were coming in at had an effect. For what it's worth, when Price faced a right-hander, he got some calls off the inside corner with Hirschbeck hovering right over the catcher's left shoulder and presumably a better view. There weren't as many pitches, and Guthrie didn't have any balls mixed in between Price's strikes, but it does even the score a bit. BrooksBaseball's pitch f/x tool still had Baltimore getting roughly twice as many (10 to 5) out-of-zone strike calls.

My theory was that Guthrie's original game plan was to stay away from left-handed hitters (nothing groundbreaking there), but once he got a few calls off the plate he started trying to hit the Hirschbeck Zone rather than the true corner. In re-watching Guthrie vs. our lefties, if my theory is true, it started in the third inning. Zobrist leading off the game, Damon after him, and then Johnson and Joyce in the second inning were worked away for the most part, but got some pitches closer to the middle of the plate.

But starting with Reid Brignac in the third inning, they almost exclusively went after the outside corner or just beyond. Guthrie started Brignac with a fastball that seemed to hit the corner, then got another called strike with a change-up that probably didn't. He tried to push his luck but missed with a fastball away before getting Reid to swing and miss at a change-up way off the plate. Guthrie quickly went 0-2 on Jaso with fastballs away before retiring him on a flyout with a slider low and away. He got a fastball called strike on Zobrist and then got him to swing and miss at two change-ups.

Jaso's at bat in the sixth inning was Guthrie's night in a nutshell. He threw two perfect fastballs over the outside corner, missed with one, and then finished him off with a curveball that John Hirschbeck alleges hit the outside corner. I'm still not sure if my theory holds water. It's obvious Guthrie didn't have much interest in coming inside to lefties, but whether he was consciously trying to pitched to the Hirschbeck Zone as the game went on or not is tough to tell.

And lest this post come off as "you're just whining about the umpires," well, that's only semi-accurate. There's no question Guthrie had all of his pitches working. He commanded them all beautifully: Wieters would set up on the outside corner and barely have to move his glove to receive the pitch. He missed his spot badly only a few times, and when he did miss, he mainly left it too far off the corner. The one that stood out most was Matt Joyce's flyout after Upton's double in the eighth. Guthrie left a fastball middle-in and down, but Joyce was a hair late on it after seeing changeups on the two prior pitches. That said, 11 out of 11 pitches in the Hirschbeck Zone going Baltimore's way kind of stings. Anyway...

Onto game two. This one featured two right-handed starters, so there should be no clear split in how the corners were called. Indeed, this appears to be the case. Chris Tillman got four out-of-zone strikes compared to Shields' two, but three of Tillman's and one of Shields' were very close to being strikes, so at least for the starters, Wally Bell seemed to do a good enough job.

The two calls this game that struck me came from Baltimore's bullpen. With two on and one out in the 8th, Sam Fuld pinch-hit for Sean Rodriguez against Koji Uehara. Uehara started him off with a fastball over the outside corner, essentially a perfect pitch to get ahead in the count. After a fastball out of the zone, he threw a change-up that maybe -- maybe -- hit the outside corner. Fuld didn't seem to think so, and for what it's worth, FoxTrax didn't either. Ahead 1-2, Uehara finished him off with a fastball that looked a little bit low but may have cut across Fuld's knees. Uehara getting the call on both of them was pretty much how the entire weekend went.

The one that really got me was Elliot Johnson's at bat in the ninth against Kevin Gregg. With one out, Johnson quickly got in an 0-2 hole with a foul ball and a (legit) called strike. After a fastball away to make it 1-2, Gregg got the strikeout with a fastball that just wasn't a strike. At any point. 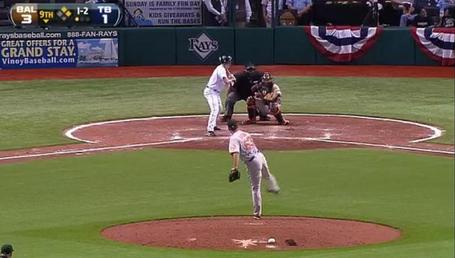 Combined with the Ben Zobrist-Nick Markakis dagger right after, just two more breaks that didn't go the Rays way. Certainly the Orioles outplayed the Rays in just about every facet over the weekend (I only saw the second half of Sunday's game, but I have no complaints about Laz Diaz and eyeballing the BrooksBaseball charts it seems he called a solid game). It just makes it all the more frustrating that everything else went against the team as well, from the Hardy-Upton non-call to the Hirschbeck Zone to the lack of timely hits, etc. On the other hand, it might be better to have the bad luck now rather than when the team is playing well.