A Quick Look at What Hellboy Threw

Share All sharing options for: A Quick Look at What Hellboy Threw

I'm sorry if that title isn't your cup of tea, but until we get some good character moments, it's the only nickname we have.  I know Wednesday's start was a day game so I can't fault you if you missed Jeremy's first start since November 2010.  He was mowing guys down left and right and even switch.  He notched 10 Ks in 5 and two-thirds and at times looked untouchable.  Of course he got touched a couple of times and we'll take a look at that, but first let's see what he threw. 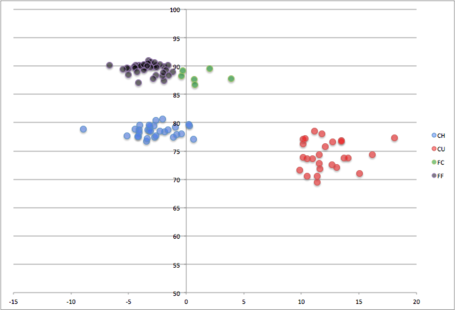 First off, the data comes from Brooksbaseball.net, but I've relabeled a couple of pitches that looks to group better and that's what we'll be working off.  Secondly, this is from the catcher's perspective and the horizontal axis is in inches that the ball moved.  The vertical axis is velocity in MPH.  You can see that according to Pitch F/x Narwhal was maxing out at 90-91* on the four-seamer (FF) with what was called a cutter (FC) that broke away from righties and towards lefties.  You can see that the change up (CH) was around 10 MPH difference between the four seamer and the curve (CU) was even slower but breaking away from righties by 10-12 inches.

Now that you can have a visual of how the ball is breaking I wanted to take a look at how he worked through the lineup each time.  Jeremy has a reputation as a guy that will throw any pitch anywhere, but I wanted to see how he mixed up pitches as batters saw him more times.  A wise man learned me on the concept of "Unfolding" pitches.  The idea is that first time through the order you want to be very fastball heavy.  As the lineup turns over you want to mix in your change up and the last time you lean on your 3rd best pitch.  Did Jeremy follow this mindset?

*A caveat that I have failed to mention so far is that we're looking at the data from one machine so we cannot just assume that this is accurate.  If he's way up or down velocity wise or pitches break differently down the road you should not make the assumption that some radical change has happened.  As more data comes in we can take more looks and have a better idea of what's really going on.

1st Time Through the Order 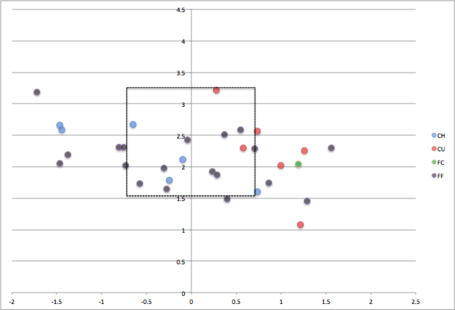 His first time through it looks like he pounded the zone with four-seam fastballs.  What I really like about the fastball is that nearly all of them were in the lower half of the zone.  He also mixed in some curveballs that were either on the fringe of the zone or quite a bit out of it.  I especially like the dropped in curveball at the top of the zone.  I believe that was the first pitch of the at bat to Vernon Wells who ended up striking out to end the first.  You can also see two change-ups to lefties and four to righties.  You'd expect him to throw more to opposite handers, but I love to see him have the confidence to throw it to righties. 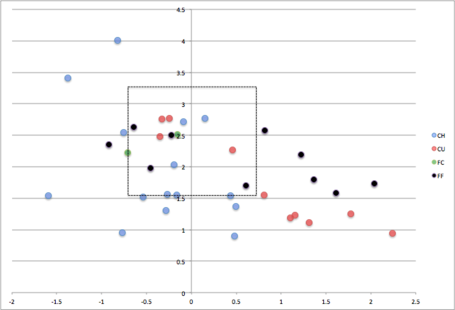 You can see the second time these guys saw him, he barely threw any fastballs in the zone, including several well out of the zone.  This is where he started amping up the change-ups either in the zone or tantalizingly close.  Especially those near the bottom of the zone that fell out of it and under bats.  He also ratcheted up the curveball a bit more throwing a couple up in the zone and several down and out of the zone from the right-handed perspective. 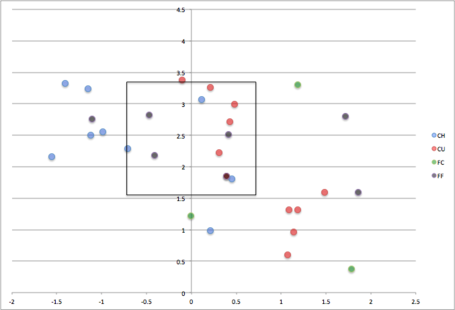 Here we can see he barely went to the fastball and threw a lot more pitches out of the zone.  Change up and curve down he was keeping the bats out of the zone.  I particularly like how he kept the ball all over the outside of the zone.  Helly even likes to waste page space by not taking the time to fill the middle of the chart.  Damn the paper costs, I hope he continues to have that void.

Here's a numerical summaries for those that like that sort of thing:

B = Ball, SS = Swing Strike, CS=CS, note that foul and in play make up the remainder percentage.

It's also likely that Hellickson knows that the third time through that batters might be keying on spots and so he feels he has to go out of the zone more to keep batters honest.  Let's take a look at his four-seam fastball velocity over the course of the game. 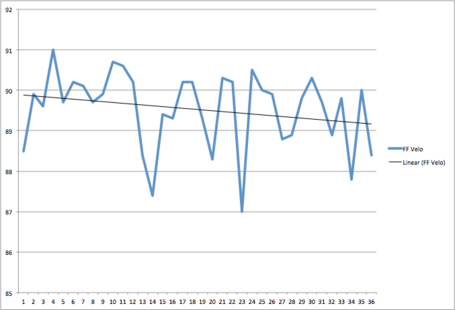 I thought R.J. had a fantastic read earlier where he highlighted that fastest pitch of the night.  Since he's nearly 2.7 times the writer I am I suggest you give it a looksee.  You can see that over the course of the game Hellickson did show some declining velocity.  It's normal for a pitcher to lose velocity over a game and in this case it was less than a MPH so I don't think anything broad or sweeping should be drawn from it.  I like ho he changes speeds, if this data is to be believed.

It was a good start by a very intriguing pitcher.  I hope to see many more that are just as good as this start was and it will be interesting to watch Jeremy Hellickson become the amorphous pitcher with excellent control that I think we all envision.